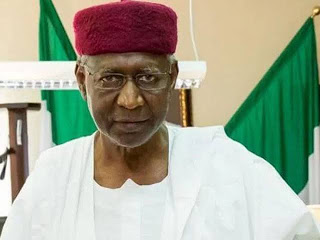 While we were yet asleep, neatly tucked into our beds maybe snoring, the Federal Government of Nigeria via the ‘Special Adviser to the President on Media’, Mr. Femi Adesina made the sad announcement about the unfortunate demise of the Chief of Staff to the President of Nigeria, in the person of Kanuri born Abba Kyari due to complications arising from COVID-19 Coronavirus pandemic.

With the death of the strong man who was known to be a man of great influence and power, he becomes the latest high profile victim of the pandemic that has ravaged the world ceaselessly. Many had thought he would survive the ordeal, but alas it is not to be. So maybe now people would believe that this virus invasion is actually for real and quite deadly!

Not too much is actually known about the background of the all powerful Abba Kyari, a Kanuri man from Borno State, but since he came to the focus when President Buhari came on the scene and even announced him as the COS, much folklore had been written about him, as an all powerful man in this administration.

His COVID-19 status was announced on March 24, 2020 after arriving from Europe in the midst of the pandemic that had swept the world. He immediately thereafter went into self isolation as was expected. He later emerged from the isolation stating that he would fight the battle and survive and then got moved to Lagos, though his whereabouts in Lagos was shrouded in secrecy. Not much was known about his progress though he was said to have some other health issues too, until his unfortunate demise was announced via Mr. Adesina’s press release that said he passed away on the 18th of April 2020

CHIEF OF STAFF TO PRESIDENT, ABBA KYARI, PASSES ON

The Presidency regrets to announce the passage of the Chief of Staff to the President, Mallam Abba Kyari.

The deceased had tested positive to the ravaging COVID-19, and had been receiving treatment. But he died on Friday, April 17, 2020.

May God accept his soul.

Funeral arrangements will be announced shortly.

Self-acclaimed investigative journalist and media sensation’, Kemi Olunloyo had already announced to the world about a week or more ago, the death or passage of a high ranking personality in the presidency that many took with a pinch of salt. She had said she wouldnt embarrass them and allow them the dignity to announce the passage themselves.

Now not too long after that, Abba Kyari is dead and the death is now confirmed by the authorities.

May he find Al Jannah Firdaus.