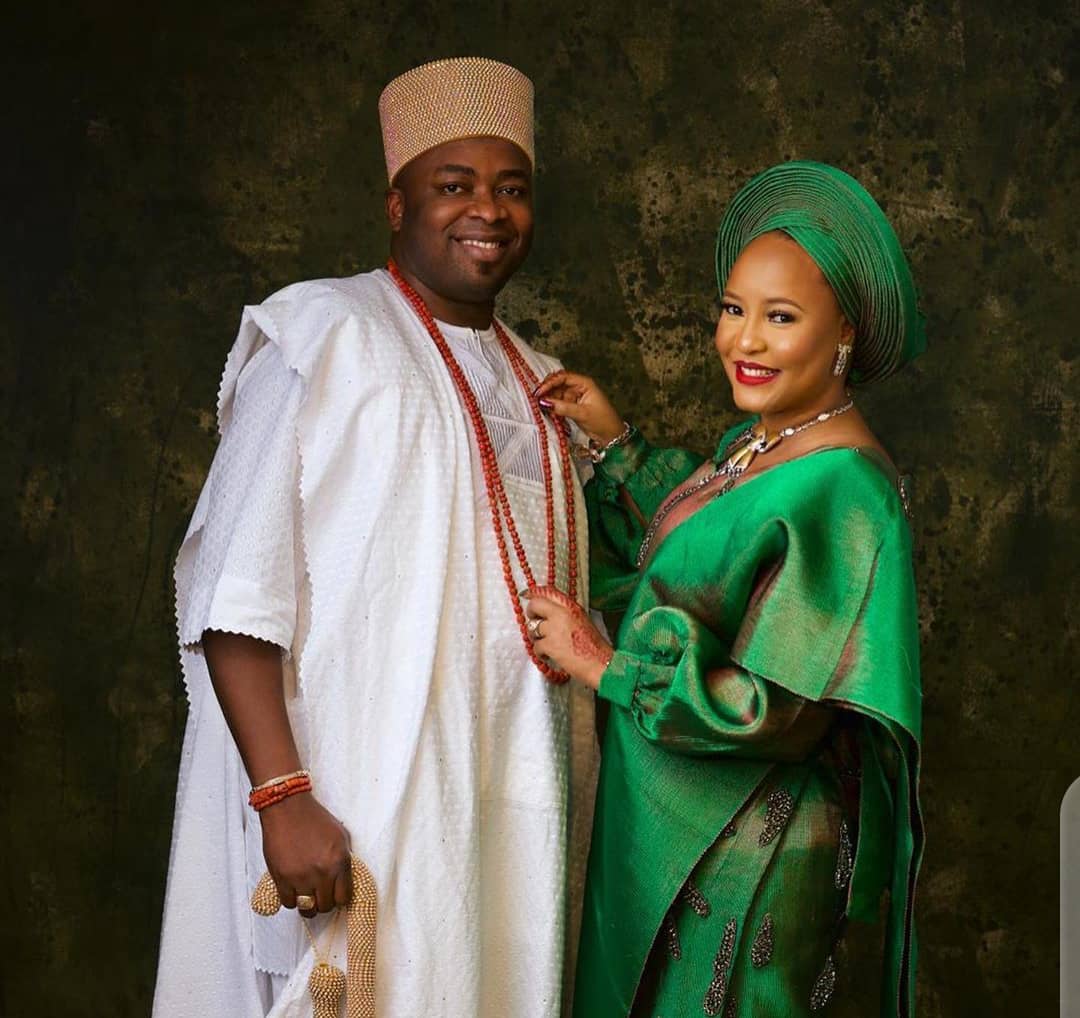 …one of the wives, ‘Olori Hadiza Elegushi’ goes all out to celebrate her husband’s 10 years coronation anniversary.

If not for the Covid-19 Coronavirus pandemic that has ravaged the entire world with so many deaths recorded and with very many still fighting for their lives, which has therefore put people in a more somber, not too celebratory mood, we know for a fact that the whole of Ikateland and environs, would have been agog right now, as the people and friends of the monarch, would have gone all out to show the whole world without sparing any expenses at all, how much they love their handsome and God blessed monarch of extraordinary panache and grace. That’s talking about the one and only, his royal majesty, Alaiyeluwa Oba Saheed Ademola Elegushi, the Kusenla III, the Elegushi of Ikateland and environs.

The drums in their great numbers, accompanied by other instruments of praise & elevations would have let loose many sonorous rhythms in extraordinary praise and gratitude for a man whose reign has so far, been kind and profitable to his people.

This great king, a young man of immense means by all standards & acknowledged by all as one of the most celebrated monarchs in the whole of Nigeria. He is in fact said to be Nigeria’s ‘most stylish king’ bar none, a ‘cultural icon’ by all means, who has made being a monarch look so beautiful and so inviting.

Known and acknowledged to be one of the most loved also by his subjects both young and old.

In his early 40s and by that, he is the ‘youngest royal father’ in the whole of Lagos State, the center of excellence and by virtue of that, one of the youngest monarchs in Nigeria right now. But can you all just believe it, young as he is, he is already a decade old on the throne!

So just like yesterday, it’s already 10 years gone like a sweet dream. A whole decade already (10 incredibly successful and fruitful years) already on the throne of the Elegushi of Ikateland and environs.

From when he was picked as the one to ascend the throne, to the actual date of his coronation, to this very year of his 10th year anniversary, it is has been a decade of grace, growth, development, excellence, panache, glamour, well-being and far more in his domain, Ikateland and environs.

It’s like the kingdom had been awaiting his reign. Obviously even his ancestors have shown their great support of his reign too, by the prosperity & all the good things that the kingdom has witnessed so far.

The lover of great and impressive chariots, likes of his custom built Rolls Royce Gushi, his special edition Mercedes Benz Maybach S amongst an impressive & Intimidating collection, is so happy to have seen this beautiful day.

And one of the happiest people on the Earth right now, who is so happy like many others to celebrate him on this 10th year on the throne, is none other than, the superlatively gorgeous Olori Hadiza Yakassai Elegushi’, also known as Queen Gushi II, who is the impressive 2nd wife of his royal majesty.

In her beautiful messages of congratulations and appreciation as seen in Punch Newspapers, she humbly espoused all the great qualities of a man, who is known to be a wonderful father to his subjects, a great husband and one who is generous to a fault, especially one who does what he does so quietly, only those who know actually know. It’s a quality of his, that he has always kept incognito, but he has always done from even before he became a king.

The gorgeous Olori Gushi II then went further to pray for more prosperous years ahead for her loving husband, who she especially called, a rare gem. The power of her words, are especially better understood as the anniversary is at the time of Ramadan, a very powerful time of fasting for the Moslem faithfuls.

We especially join the Olori to wish the king a deserved coronation anniversary, while also praying that Kabiyesi’s reign would continually be prosperous for him and all his subjects too.