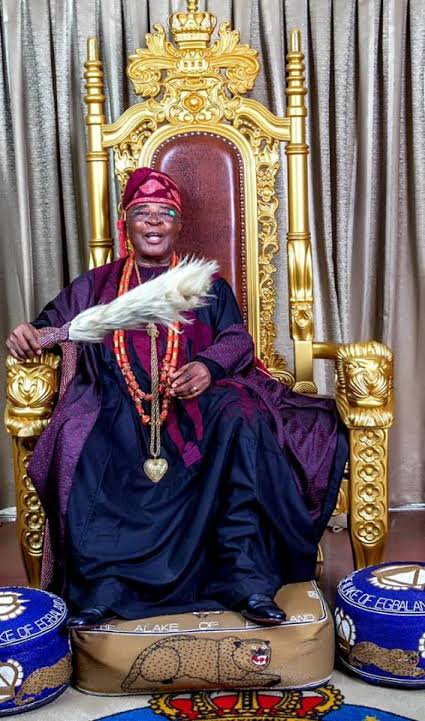 Many days for the thief & one day for the owner is the long trusted sayings of the sages and the words of the elders rang true just at the weekend at the 15th coronation anniversary and conferment of chieftaincy titles event of the Alake of Egbaland, his royal majesty, ‘Oba Michael Adedotun Aremu Gbadebo, Okukenu IV’, who is also the paramount ruler of the Egbas.

The event itself as it should normally hold, held at the Ake Palace of the revered monarch. And as was excitedly expected, the palace ground was filled to the brim with visitors from all walks of life. There were 15 personalities to be honored, so their guests, family members, friends & associates & spectators filled the spaces available. It was a sea of color, in fact a kaleidoscopic spectacle, as everyone that came to support each of the 15 recipients of honorary titles came gaily dressed like they deliberately wanted to outshine others. There were many traditional drummers & praise singers all jostling for positions so they would be seen. There were well-wishers & all sorts, including thieves too. And this dastardly kinds had a field day at the venue. Their magic fingers worked wonders, as they performed disappearing tricks & they turned many smiles into gloomy faces, as their victims realised their losses.

Just imagine that it is at such a beautiful occasion where eminent personalities were being celebrated & honoured, that some came deliberately as a gang or better still a network of expert thieves to rob, steal & cause barefaced havoc.

The first alarm raised came from one of those that we had gone to the event together. So we had arrived at the venue and for security reasons we drove in to try to avoid the mob, but even at that we were immediately surrounded by those pesky drummers & others that we didn’t know, all jostling to get our attention. This was the perfect environment & opportunity for this quick fingers. So the person I was with got out to wear his Agbada & made the mistake of putting his phones into his side pocket to allow him, wear the apparel. But before one could say Usain Bolt, the expert thief had struck & one of the phones was gone! It was one of those expensive Apple iphones that was still relatively new & contained so much information, including the person’s credit card that was in the phone pouch!

What these thieves only actually need is a crowd & just a touch and boom, something would have happened, years back I remember that a phone thief had literally dipped hand inside a person’s agbada to steal the person’s phone! On this occasion by the time we realised that the phone was gone, we couldn’t locate who did it or when particularly. But thank God for technology, when we realized what had happened & by the time we tried to locate where the phone was like an hour later, it had reached Ibadan, Oyo State! Apparently, immediately after they stole the phone, they pass it to their accomplices, so that if they are caught they would deny and without evidence, you are left looking stupid. This particular gang was a network of 5.

While we were still grappling with what had happened to us, one of the recipients of the Chieftaincy titles who had heard us, also raised the alarm that his own phone was gone too! What??? Imagine that they didn’t even spare a gaily attired high chief in his flowing agbada? Yes they didn’t give a damn.

So we told a few of the security people around and felt that the phones were gone already without any likelihood that they could be recovered, it was a real dampener. We later found out that in all 12 phones had been stolen successfully! I was shocked as I had on me, a combined phone value of about N2.6m or more (3 phones- consisting of the very latest Samsung & 2 of the newest, highest grade iPhones), that I was holding in trust for someone! Just imagine anything if anything had happened to those phones?

Even after stealing 12, these sons of a gun, didn’t think that was already a good day’s work and wanted to go beyond their boundaries. So one of them had thought to go after the royal father himself, to do his trick and then gbam, that was when the unbelievable happen to the utter astonishment of all that saw it.

The bastard dipped his hand into the kabiyesi’s outfit and literally got stuck! He was literally gummed to his royal majesty! Showing baba, a retired Soldier is not an ordinary person at all, but a well cooked one for that matter.

After the thief was caught red handed, the OPC folks now informed us that maybe he was the same that stole our own phone. Lo & behold, when he was handed over to the police he confessed his part, that he was part of a 5 men gang. That night 9 of the stolen phones were recovered. The remaining 3 including the one already in Ibadan was returned also. In fact for fear of arrest the thief gave his wife the phone with the credit card to return to Abeokuta. He had removed the sim card already & tried to penetrate the phone, but couldn’t due to the security of the iPhone. But he returned the phone & Sim card intact.

Just imagine that the thief was another kind of evil fiend, bent on wrecking havoc, that’s the same way he or them would have been caught too!