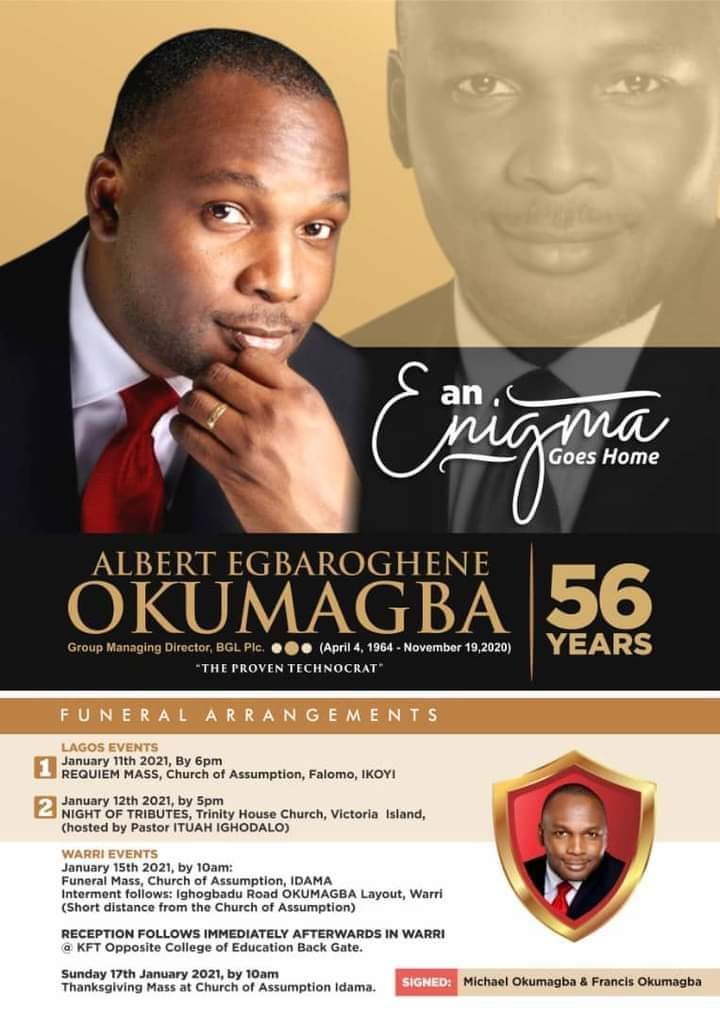 All is set for a January 2021 funeral arrangements for the interment of Albert Okumagba who had passed to the great beyond a few weeks ago And it’s a Lagos & Warri, Delta state affair.

The renowned stock trading guru and financial experts had died at the age of 56. The last few years before his sad demise wasn’t a great time at all as he had had many major battles that affected him greatly and took a major toil on his health and well being. He was battling the EFCC, a battle that had been on for several years now and he had even gotten banned from trading or any involvement in trading. These issues which affected him and also perceived betrayal by those he had counted as very close friends, hammered the nail on the coffin.

So last month everything came to a head as he finally gave up the ghost.

So come Monday, January 11, 2021 by 6pm at the famous Church of Assumption, Falomo Ikoyi, baring all circumstances that could change things, a ‘Requiem Mass’ in his honour would take place. We can be sure that all of those who weren’t there for him, when he needed them most would all gather to pay what is considered to be their last respects.

Come the next day, Tuesday January 12, 2021 from 5pm there would be thr “Night of Tributes, which would be held at the Trinity House Church, Victoria Island that would hosted by Pastor Ituah Ighodalo.

Thereafter, everything else shifts to Warri in Delta state where he hails from. On Friday, January 15, 2021 at 10am, all roads would lead to the Church of Assumption, Idama for the funeral mass and then the interment follows thereafter at Ighogbadu Road, Okumagba layout, Warri. Reception would then follow immediately afterwards at KFT opposite of College of Education back gate.

On Sunday, January 17, 2021 by 10am a Thanksgiving mass would hold at the Church of Assumption, Idama.

Before his troubles started. ‘Albert Egbaroghene Okumagba’ was a close friend and business partner of the billionaire Executive Chairman of UBA Group, Tony Elumelu in their early days. Mr. Elumelu is the owner of Heirs Holdings, one of the biggest shareholders of UBA Group. Many years back, the duo of Tony Elumelu and Albert Okumagba and then another had started what later metamorphosed into BGL Plc. They had had a lot of business exploits together, having being directors together at the then bank-Standard Trust Bank that later bought UBA.

Sleep on Albert, till the day of your resurrection.