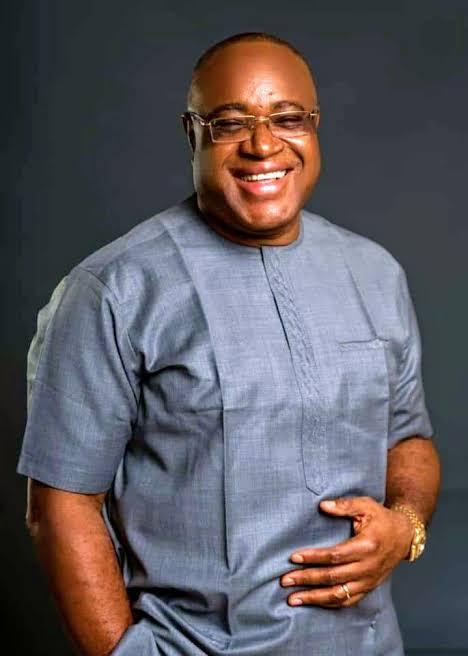 Businessman-cum-politician, Prince Ned Nwoko of Idumuje-Ugboko community in Aniocha North Local Government Area of Delta State, who very reliable sources say has continued to pull the strings of false stories, has alleged that another prominent son of the same community, who normally should have been his brother, in the person of the chairman of Rainoil, Chief Gabriel Ogbechie, is sponsoring a plot to assassinate him!

This however, has been found not to be true at all.

According to a petition he had written to the office of the Commissioner of Police, in Abuja, the well respected Ogbechie was mentioned as the sponsor of a plan to kill him via two suspects in that were incarcerated in Kuje Prison. In the petition Mr. Nwoko alleged that his young wife, Regina Daniels, was told by a Wale Jana that he (Jana) had been informed about the plot by an inmate who had overheard some suspects discussing how to assassinate him.

_“I was reliably informed by my wife, Regina Daniels, who was also informed by one Mr. Wale Jana, that the suspects who were arrested and remanded at the Kuje Correctional Centre in connection with the murder case in my village, are plotting to cause me harm and possibly kill me._

_From the information made available to me, the evil plot is being sponsored by one Chief Gabriel Ogbechie, the chairman of Rainoil. I came to this conclusion because, according to the report sent to my wife by Wale Jana, an inmate in the same room with the suspects at the correctional facility who pretended to be sleeping heard them plotting to harm me by conspiring with others outside the prison yard. From what he heard, the sponsor of the planned attack owns a filling station and is in the business of oil and gas and hails from the community around. As far as I know, the only person that fits that description is one Chief Gabriel Ogbechie…”_

Meanwhile, if it were not for the involvement of the police, the exposure of Ned Nwoko’s false assassination theory would have gained public unprecedented milage and acceptance.

Based on the petition, Chief Gabriel Ogbechie and some other people were reportedly invited by the police for questioning, including Ogbechie’s lawyer. The case even got to the office of the Inspector-General of Police, who then put together an investigative team to probe the allegation. In the course of the investigation, Ned was asked to present the said Wale Jana who he had claimed in his petition had overheard the suspects plot to kill him, but shockingly Ned changed the story! He was said to have told the police that the person who actually heard the suspects plans to kill him was not the Jana again, but one Ossy Boise.

When he was asked to present the said Boise, Ned claimed that the guy was dead! To get to the bottom of the matter, the police then reportedly asked him to narrate how the said Boise died, where he died, what may have killed him and where the autopsy report was, all to which Ned could substantiate neither could he provide proofs to.

Consequently, the case was dismissed by the police for want of evidence.

It was after this initial plot had failed that we gathered, Ned Nwoko decided on an escapee method to push the warped narrative to the public domain. In the planted narrative, Ned claimed that the dead Boise was actually poisoned and that Gabriel Ogbechie was behind his death, so that Boise wouldn’t be able to testify against him (Ogbechie) in the case.

Logically, Ned Nwoko’s narratives were clear falsehoods, based on 2 premises. The first premise being that, in the petition that was written, which alleged a plot to kill him, Ned had mentioned a Mr. Wale Jana as the informant to his wife, who had overheard the suspects discussing the dastardly plot. But when Ned was asked to present the Wale Jana, the story changed dramatically! And instead it was no more Jana but now Boise. The second premise is that, when the 2 community youths were picked up, they were arrested and detained for murder. When they got to the court, the judge said that they were to be remanded in Kuje Correctional Centre, pending the conclusion of the investigation. But Kuje Correctional Centre was overcrowded then and because of the coronavirus protocols, the 2 suspects were instead remanded at Suleja Correctional Centre.

In other words, Ned not been privy to where they were actually sent to, had made a false claim! If they were never at Kuje, how could someone in Kuje have heard them plotting an assassination? Kuje in Abuja and Suleja are major distances apart!

Therefore, sources said, it is crystal clear, that it was a deliberate false narrative that Ned had pushed to the public domain and these clear revelations have verified the fact that, indeed, there was never a plan by anyone in the first instance to kill Ned Nwoko; it is just a plot to malign Chief Gabriel Ogbechie.

Sources also confirmed that the assassination theory and including the ceaseless media attacks, were actually part of face-saving efforts to get back at Chief Gabriel Ogbechie, who he perceives as supporting those he (Ned) has had issues in their community with over a land tussle that dates back to twenty years ago.

According to the insiders privy to certain things, Ogbechie had challenged Ned, in a courteous manner, on his violation of due process that’s required in his acquisition of a community land, he had asked him to engage the leadership of the community properly in doing so.

The problem actually began in 2000. Ned Nwoko had approached the now late King of Idumuje-Ugboko, HRH Obi Albert Nwoko that he wanted 33 hectares of land allocated to him because he wanted to bring in investors to the community, to build a Cattle Ranch and Dairy Farm, where the youths of the community would be gainfully employed. The excited late king then allocated the 33 hectares of land to Ned as was requested and for free. We learnt, however, that instead of fulfilling his promise to bring in the investors to Idumuje-Ugboko, Ned only erected his personal mansion on a portion of the land and held on to the remaining part without any development whatsoever.

Few years afterwards, Ned again approached the now late king to request for another 100 hectares of land, upon which he now promised to build a sports university, the first of its kind in sub-sahara Africa. But for the king, once bitten twice shy, he refused him, on the ground that the 33 hectares of land he had earlier gotten and which he had failed to put to use for development as promised, was still causing crisis in the community.

The king then asked him to first start the sports university on the remaining portion of the 33 acres and then more lands would be added, if that was not enough for the university project. Sources claimed that Ned was not comfortable with the king’s suggestion. Hence, he reportedly kept pressure on the king on the matter and but in the process, the king died on the February 9, 2017.

The Idumuje-Ugboko’s kingship stool is hereditary; so, it is expected that when a king dies, one of his children would naturally take the throne. In that regard, the late king’s first son, Prince Chukwunomso Nwoko, was chosen to succeed his father and the necessary rites to that effect were undertaken. According to sources, Ned Nwoko soon approached the Prince and told him that his late father had already promised him 100 hectares of land for the university project. But the Prince reportedly replied Ned that he was privy to the agreement he had with his late father, which was for him to first start the university project on the remaining part of the 33 hectares earlier allotted to him. The Prince told him that until the project is started on the first land, the palace could not give him another land. Ned didn’t like that, thus he reportedly worked against the Prince’s candidacy to the throne.

According to reliable sources, Ned got in touch with those relevant to coronation process that would make the Prince to get his staff of office, by applying pressures on them and eventually, the Prince has not received the staff of office till date. A meeting was then called by elders of the community to deliberate on the next line of action, but according to the information gotten, thugs suspected to be working for Ned Nwoko invaded the meeting place and disrupted the whole process. The meeting was then relocated to the palace. Again, it was gathered, thugs also stormed the palace, but the youths of the community rose in defense of the palace and stopped the thugs. Tension arose and it degenerated to a free-for-all.

Following that palace scuffle, Ned Nwoko wrote a petition to the police headquarters in Abuja that someone, a certain Okada rider from Onicha-Ugbo, was killed in the palace during the scuffle and the community youths should be held for murder. Subsequently, 2 of the community youths were then arrested. In the course of the police investigation, nobody was found to have died in the palace encounter. But based on Ned’s petition to the police, the arrested youths were taken to court and remanded in Kuje Correctional Centre pending the conclusion of the investigation.

Few days after, and before the final funeral rites for the late HRH Albert Nwoko, Ned wrote another petition to the police against the heir- Prince Nwoko and the President General of the Idumuje-Ugboko Development Union (UDU), Mr. Okey Ifejiokwu. Both the Prince and the community union president were then arrested. That was when prominent personalities in the community decided to intervene afterall. Pressure was mounted on Ned by Ogbechie and elders of the community and the Prince was released, leaving Ifejiokwu still in the police net.

The Rainoil chairman later got a lawyer for Ifejiokwu through whom he secured his release from custody. That was where the problem between Ned and Ogbechie actually started. Ned had assumed that Ogbechie was supporting people against him.

FIRSTBANK SUPPORTS SCHOOLS WITH ARRAY OF EXCITING EDUCATIONAL SOLUTIONS
SAD CASE IN AMERICA AS SON 22 SHOOTS MOM 40 IN THE HEAD KILLING HER FOR ASKING HIM TO GET A JOB TO TAKE CARE OF HIMSELF!
Comment