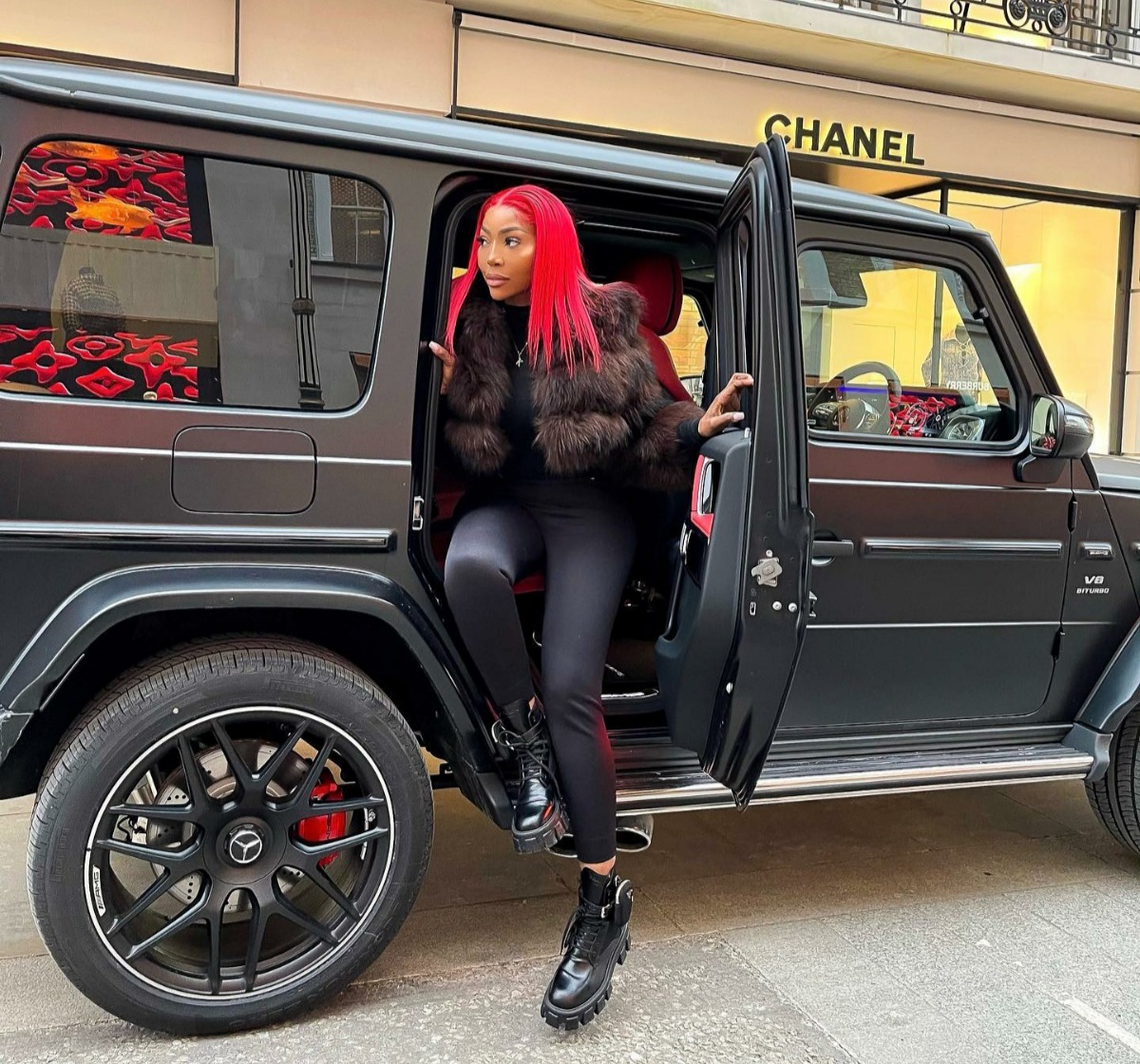 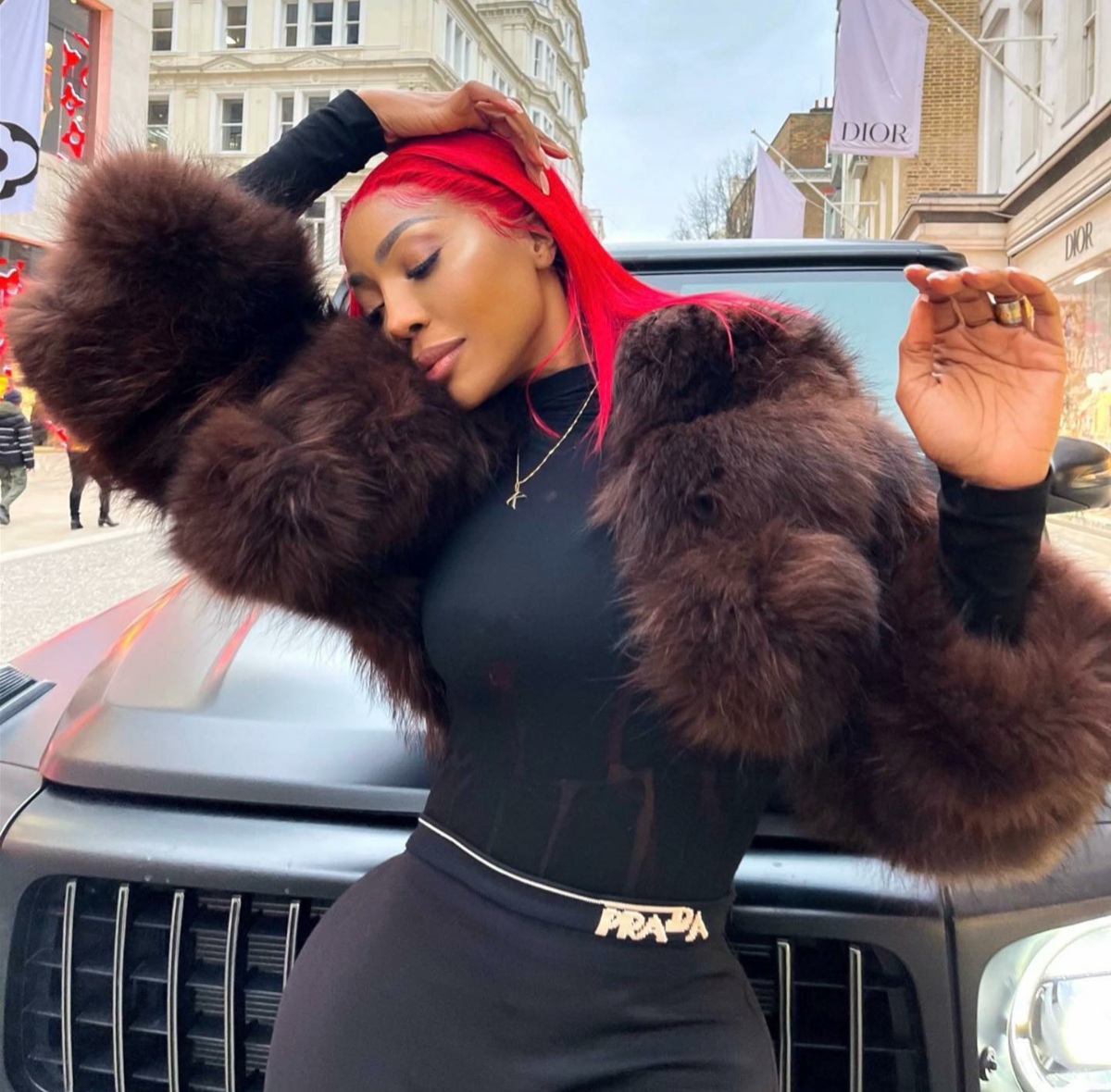 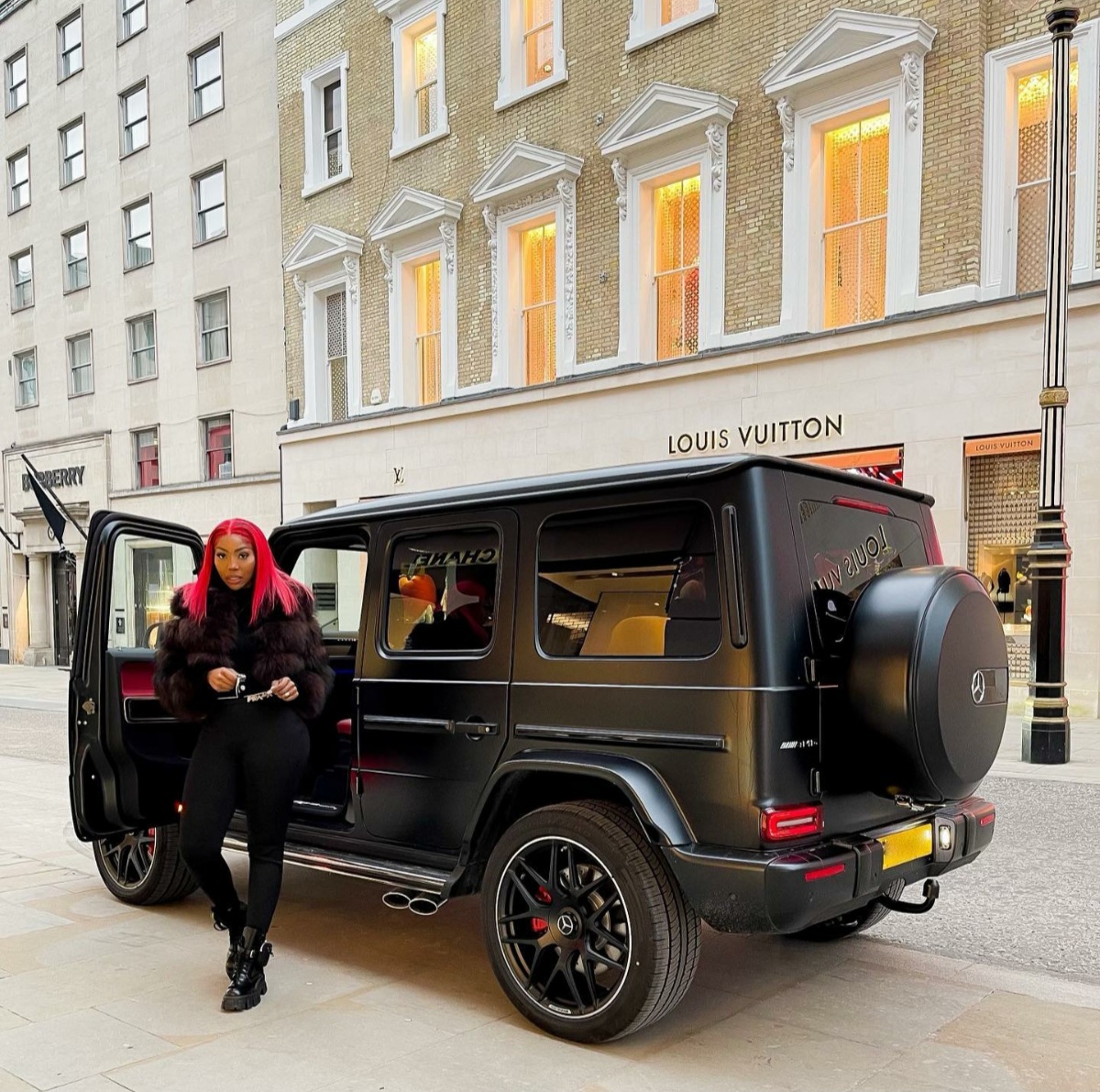 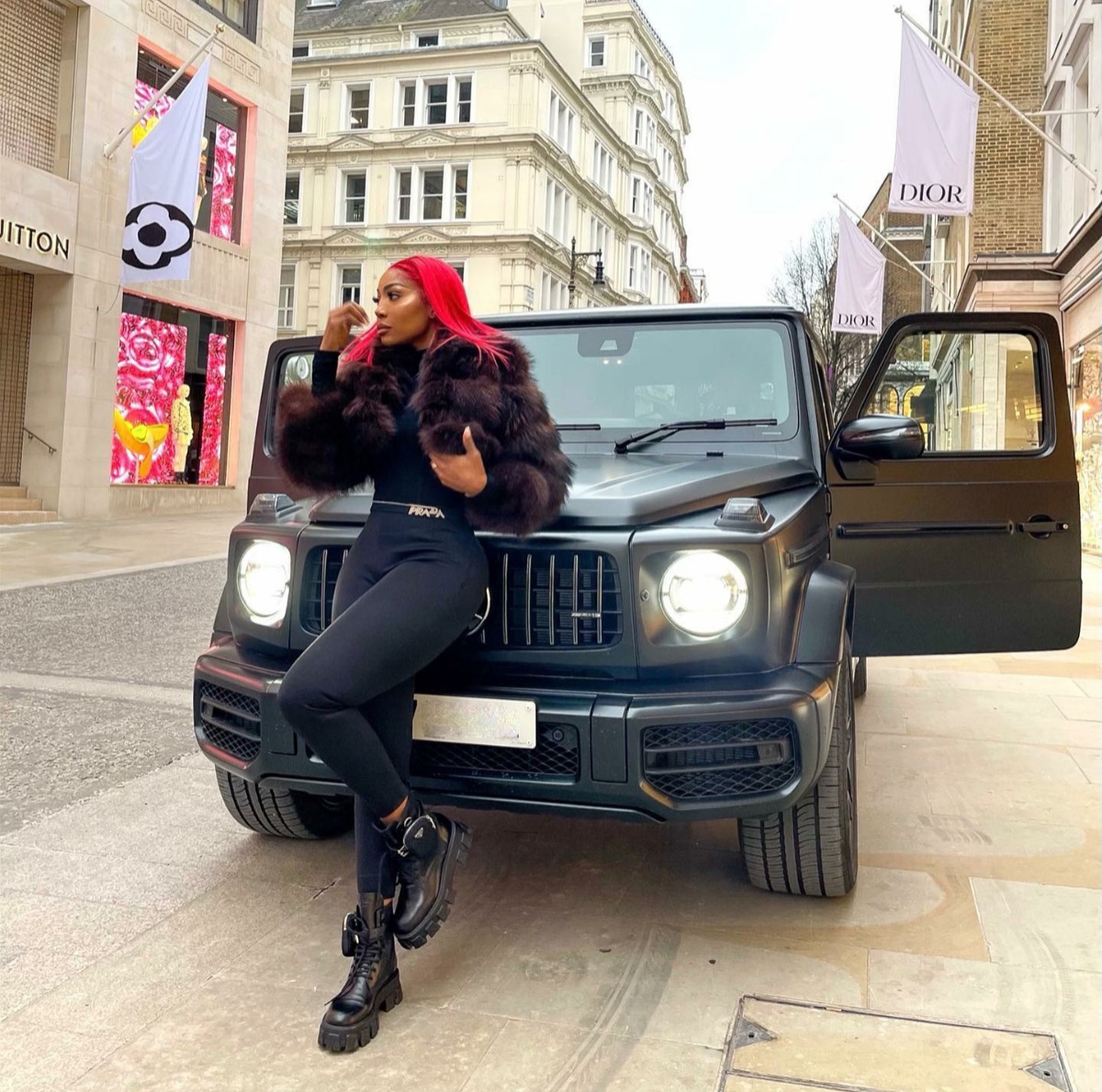 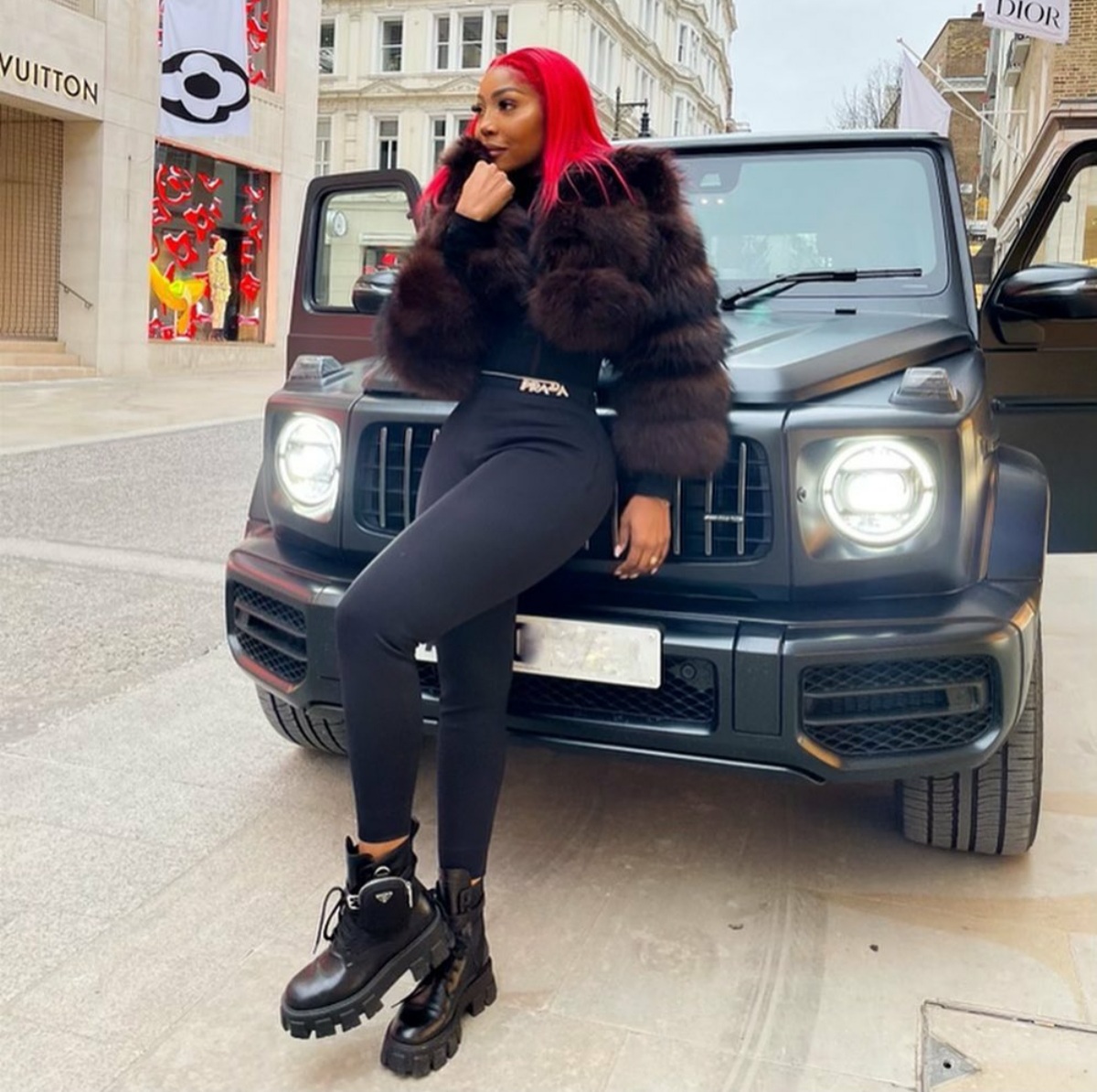 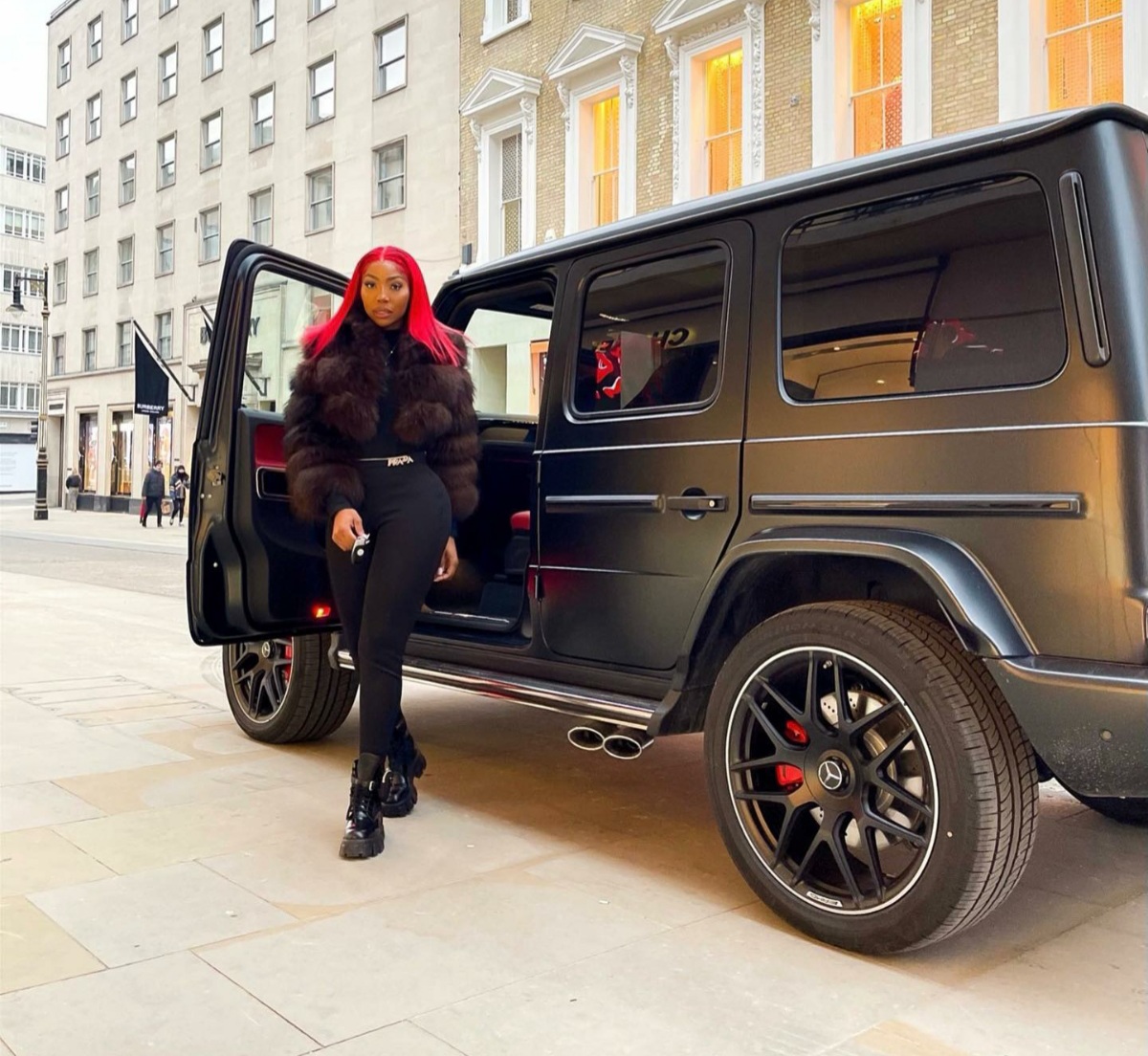 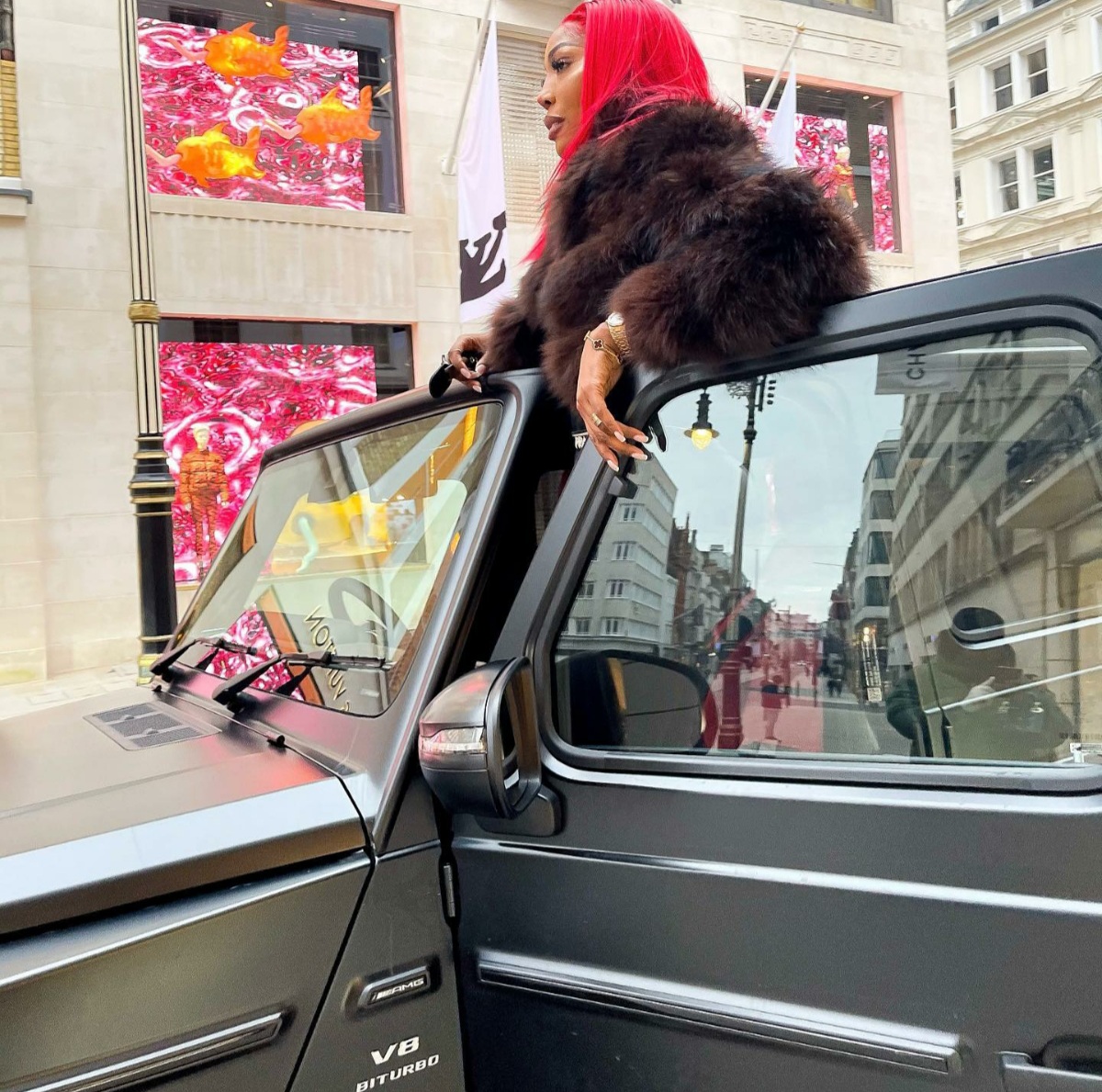 One part of the delicious duo behind the highly successful so it seems, luxury hair brand- The Goodhair Ltd, who are also the owners of top lifestyle joint- Brass & Copper by name Kika Osunde is in the happiest mood possible as we speak and by extension in a full ’cause panic mode’ right now. Reason for that is not far-fetched at all. As the supremely stylish lady, who is also probably of the most eligible bachelorettes around town, just at the weekend, on Valentine’s day February 14, 2021 to be very precise, took delivery of her latest chariot of awesome intimidation, a brand spanking new, awesomely gorgeous Mercedes Benz G63 AMG. And in absolute elation she described her acquisition thus in her own words- BEAUTY & THE BEAST…say hello to my new toy! Designo Night Black Magno G63 AMG 🖤.

The lady who had been hibernating in Accra, Ghana all of this while due to the fear of an arrest and incarceration over an issue that had occurred last year and that had taken the social media by storm, took to the social media- Instagram more precisely, to showcase the beautiful machine to the absolute delight of her fans, admirers, friends and associates who all went gaga wowing and exclaiming in delight like rapture had already taken place. Like it was expected, the public congratulations poured in, in torrents like an endless rain of good wishes.

Whoever claims that the hair business either revolution in Nigeria or around the world is not super lucrative, we are just too sure now that they must have had a rethink since. The evidence is there for all to see as those who are involved in it, are the open proof that the money in the business must be like an unending waterfall, that doesn’t look like it would stop pouring and pouring anytime soon. People can still remember quite vividly how one of the owners of another popular hair brand, by the name Mizwaneka, had dazzled all comers about 2 years ago now in 2019 of March, when she not only took delivery of her intimidating G-Wagon that had set her back by about a hundred million plus (N120M then), but she now went on not too long afterwards to further razzle-dazzle all, when she later opened a multimillion Naira valued dazzling HQ at Lekki Phase 1 on the island, to the awe of all.

So in a way since then, she had woken all others up as she had set the marker for all others to either beat or to just follow. So for fashion captive Kika, she decided to bide her time to get a newer and more intimidating version of the same brand and model, a custom G Swag with all the works as she described it as “designo night black magno G63 AMG.

Designo Night Black Magno is actually one of the 23 colours the G Swag could come in and it’s a type of Matt Black colour. The new chariot of fire is a 2020 version and an all wheel drive V8 turbo 9 speed auto transmission monster. It comes super loaded to fit the monster ego of the owner. It’s strong and well equipped for a quick get away if it’s needed for that, as it does 0-62mph in 4.5sec. The SUV one of the kings in that range for that matter, costs from between $156,450 to about $176,945 and could go slightly further up depending on the specific signature pimping that maybe far more ego tripping than normal.

So if it’s the hair business alone that’s bringing in this hard currency like torrential rainfall, then it’s obvious it’s a fantastic business. But having in mind also that Kika’s monster arrived on Valentine’s day, maybe it was the love gift 🎁 from that mysterious boo, that some have claimed/speculated but not confirmed may have proposed to marry Kika.

2019 was Chioma Ikokwu’s year, when she apparently got a luxury condominium, a 5 bedroom penthouse for herself said to have set her back by some cool millions. She had wanted to pick up a solid befitting machine that befits her growing status afterwards then, but thought better to wait. Maybe now that Kika has (gotten) a G63 AMG, she too could also razzle-dazzle all too soon. As you know them to be, twin femme fatale!

CONVICTED FRAUDSTER OBIWANNE OKEKE OF THE INVICTUS GROUP FAME FINALLY SENTENCED GETS 10 YEARS IN PRISON FOR HIS MISDEEDS.
NO SMILE YET AS ANOTHER BATTLE IS LOST BY JIMOH IBRAHIM AS HE FAILS TO UPTURN THE JUDGEMENT ON HIS SEIZED ASSETS.
Comment