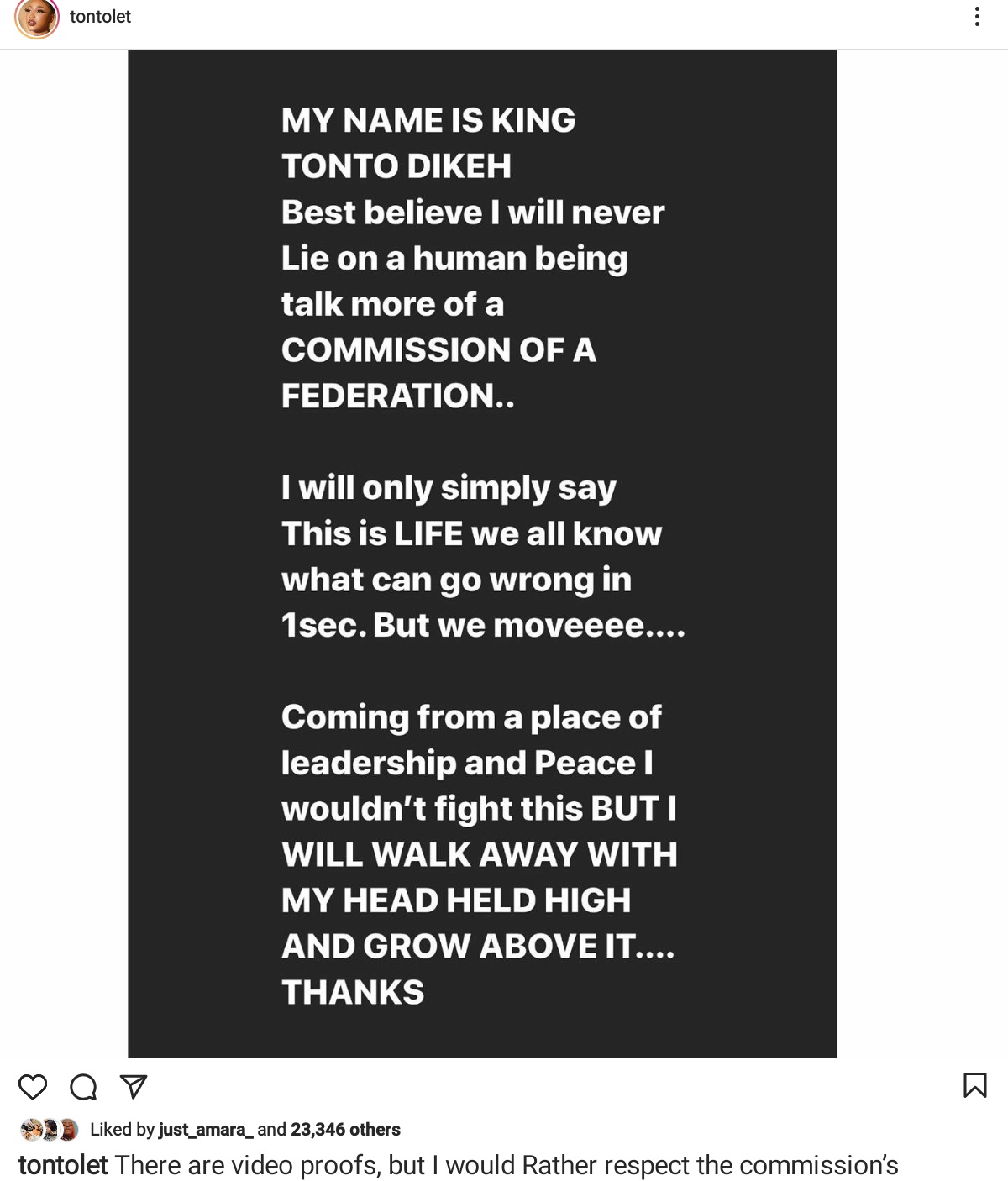 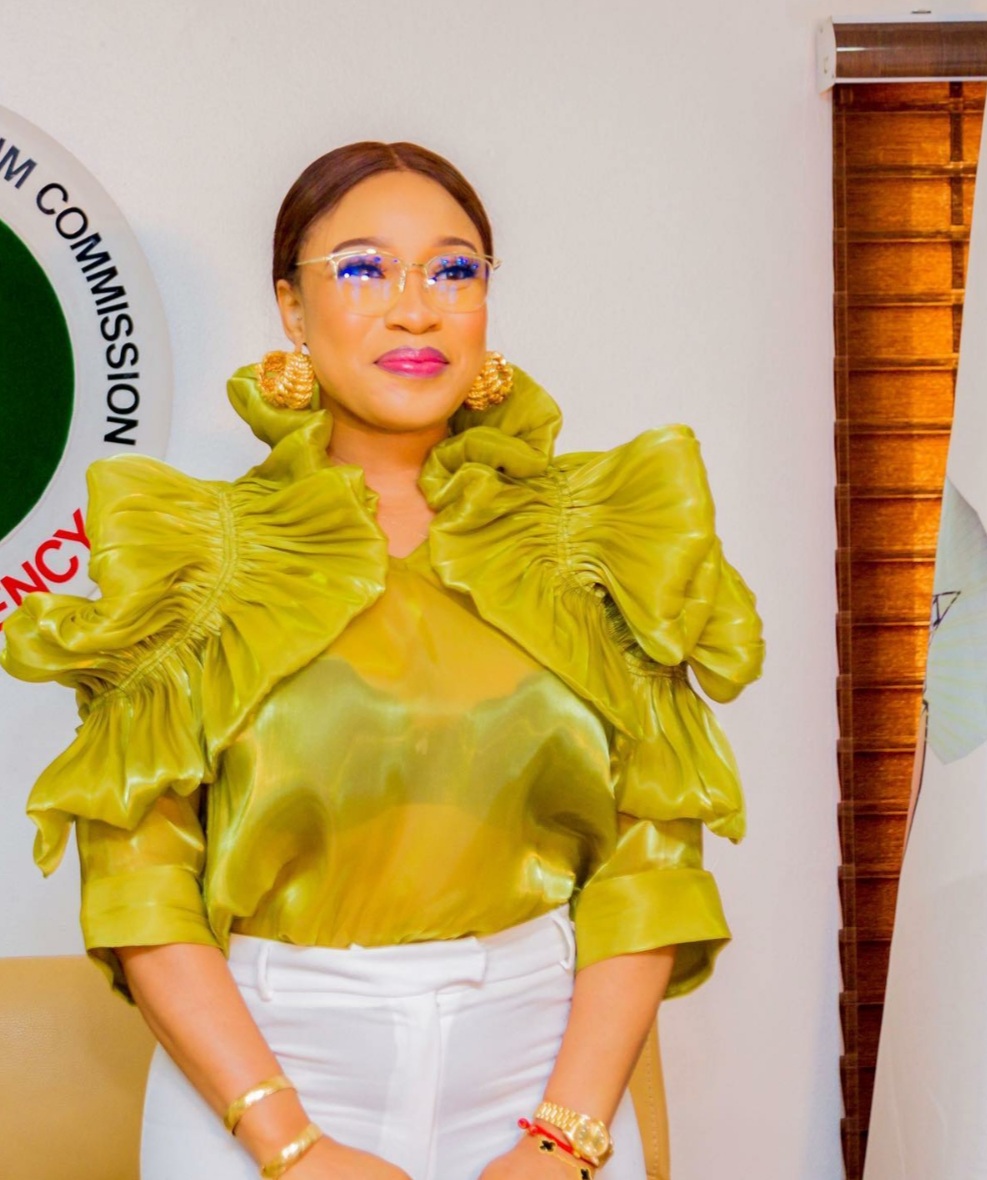 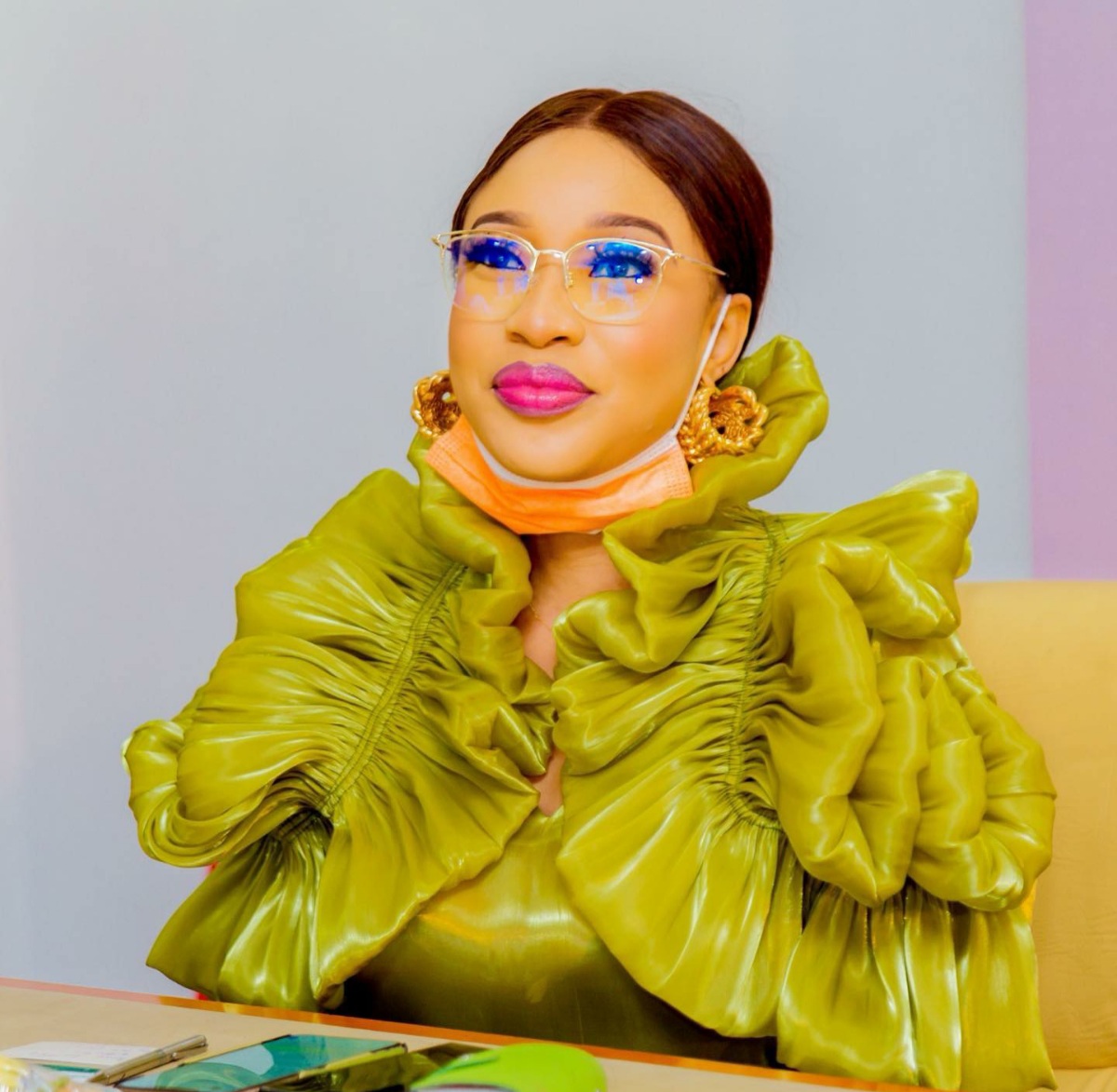 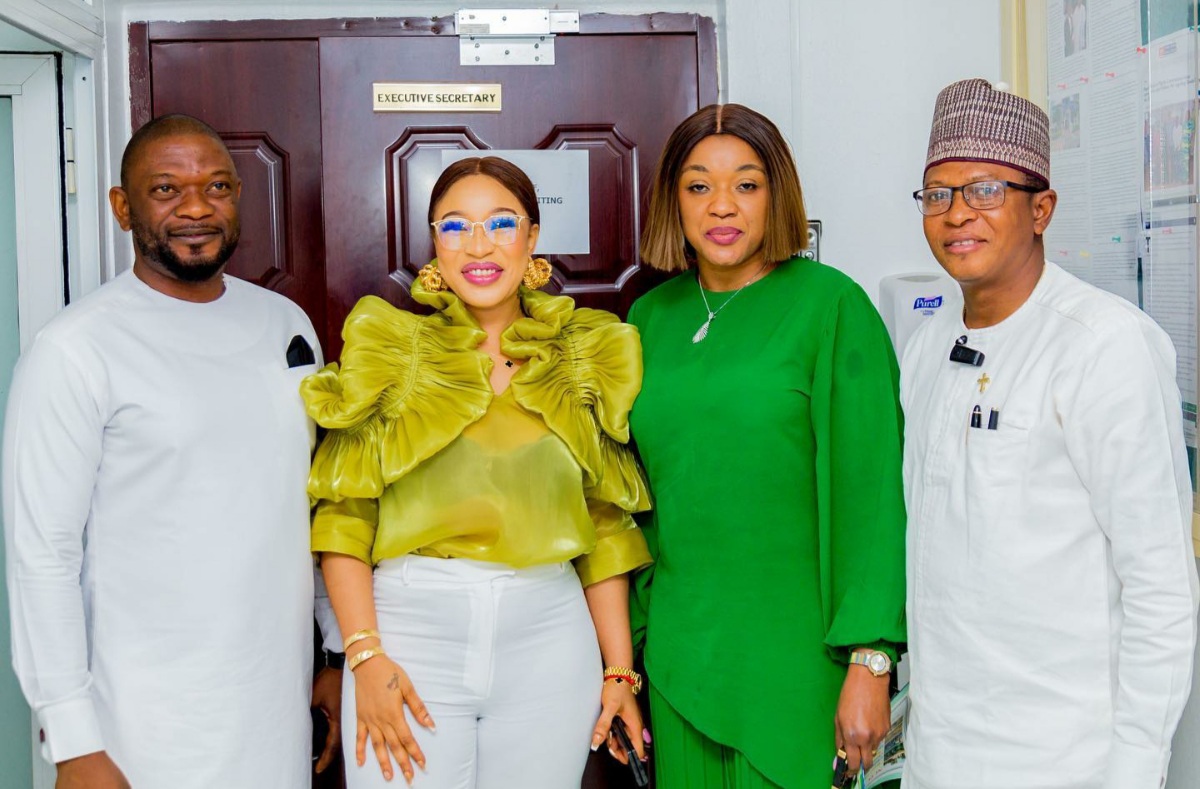 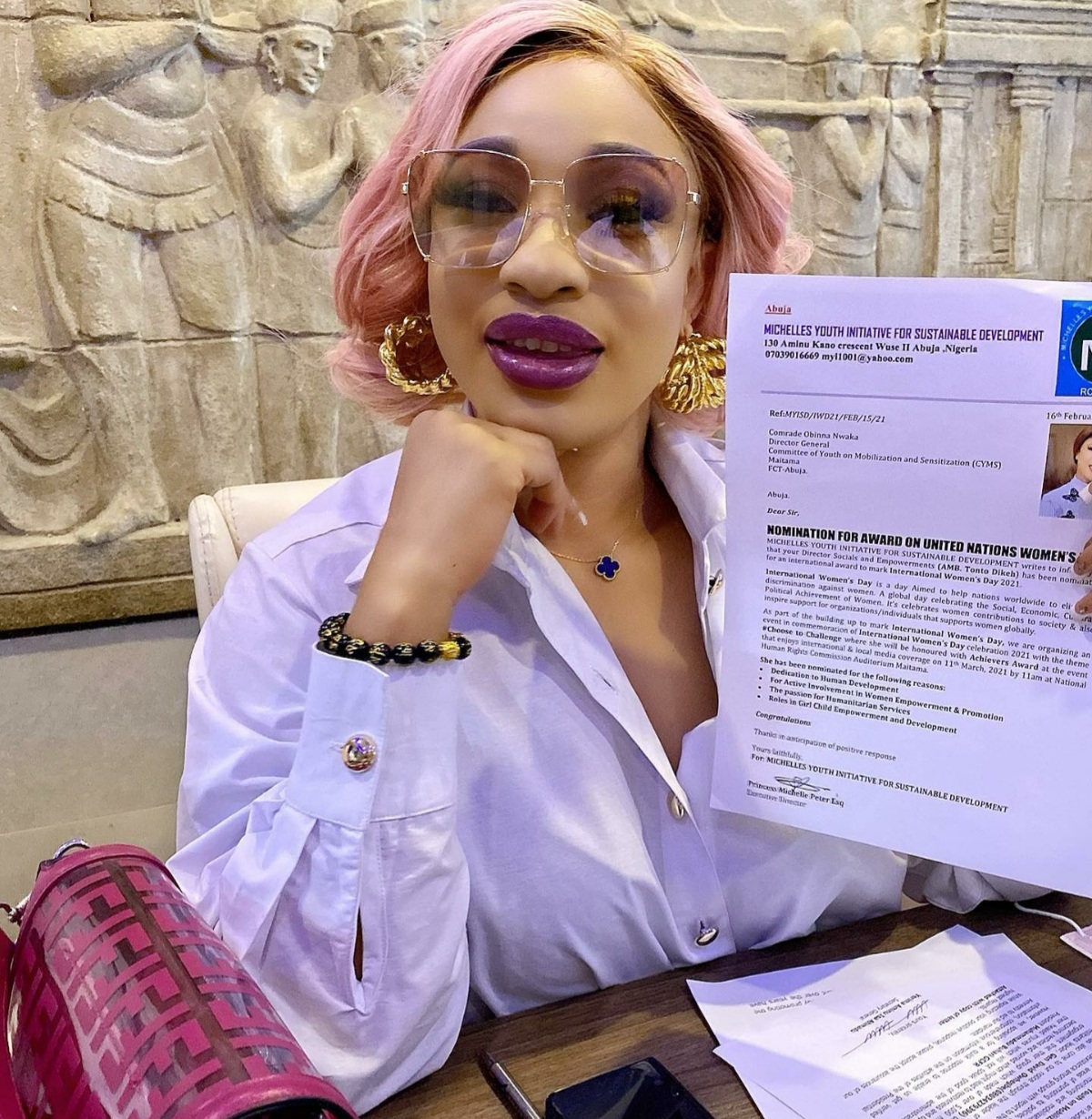 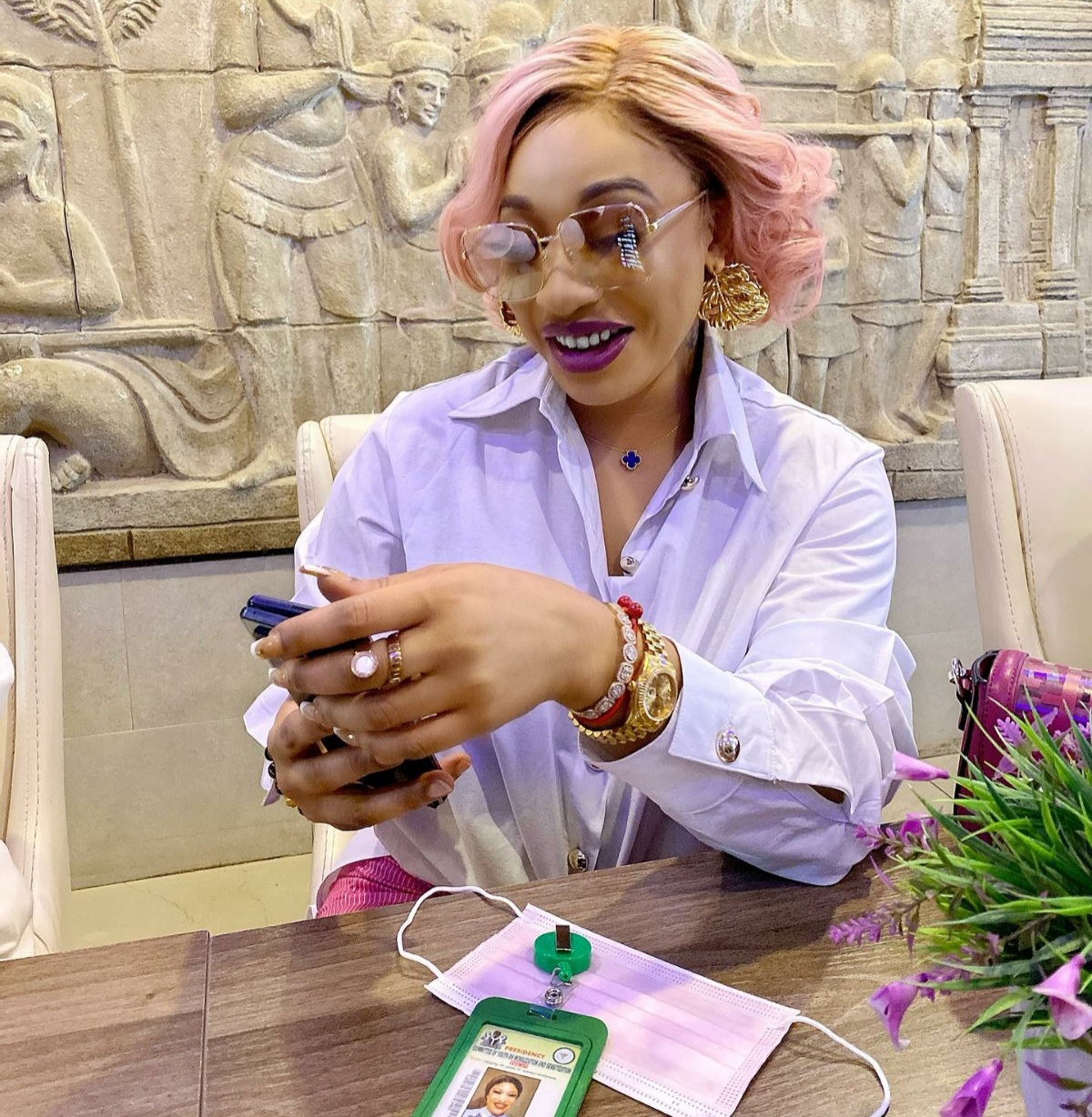 Sequel to the first report. It’s not that much of a controversy after all, but either little or big, a controversy based on a lie is still a controversy any day, most especially if the back and forth it has generated has gone viral and got people talking and one side of the divide in this case, either the Christian Commission NCPC led by gentleman Rev Yakubu Pam himself or the celebrated actress Tonto Dikeh. It’s quite obvious that one of the duo has lied and is lying and the reason for such a lie or the need to take the public on such a ride of fancy beats the imagination!

Wetin anyone dey try collect sef? Clout or what?

So after visiting the NCPC to parley with them on peace building initiatives across the country on Thursday, February 25, 2012, Tonto Dikeh excitedly announced via a posting on her social media platform Instagram to be exact, that she had been made an Ambassador for peace building. Her numerous fans, friends, associates and more went into some frenzy immediately and excitedly poured encomiums on her.

She had elatedly announced the appointment thus-

Yesterday 25th February 2021 yours Director, Socials & Empowerment @cymsnigeris was warmly received
by Rev. Yakubu Pam, the Executive Secretary of Nigerian Christian Pilgrim Commission (NCPC) at his Headoffice Abuja @pamyaks, where we had an extensive deliberation on NCPC vision, dissecting the values for National development and youth involvement in peace building in line with the NCPC’s mandate.

I was Accompanied by Amb. Chris Odey
@goodwillambassadorevents The Tonto Dikeh Foundation, Project Coordinator,
As a humanitarian, I also felt it is imperative for a few youths to have a feel of this laudable initiative through The Tonto Dikeh Foundation in partnership with NCPC where 10 Nigerians will be sponsored on
this year’s Pilgrimage activities sponsored by @officalthetontodikehfoundation
Finally, I wish to announce my position as the new Ambassador of the Commission for Peace Building. Need your prayers as we embark on Peace building
across the six (6) geopolitical Zones of the Nation because peace is indispensable”.

But responding quickly and not allowing the announcement to rest for more than 24 hours, at least so that the actress and humanitarian would bask further in the glory of such ambassadorial position, the Christian Commission via the head of media and public relations- CelestineToruka, on Friday, February 26, 2020 via a scathing press statement immediately removed the chair Tonto was luxuriating on in her grace or better still the stool she may have been standing on from under the thespian’s feet and embarrassingly refuted her claims in very strong language. They didn’t mince their words at all in stating the below-

As the founder of Tonto Dikeh Foundation, she expressed her willingness and interest in partnering with the Commission in the area of peace building.
She equally cashed in on the visit to commend the NCPC boss for his positive and relentless peace initiatives across the country.

However, we are suddenly inundated with claims from King Tonto Dikeh herself that she has been officially appointed as Ambassador of peace by this great Commission. This claim has gone virile in the media.

The Commission frowns at this claim which is a clear misrepresentation of what transpired.

The fact remains that the Executive Secretary of NCPC never appointed King Tonto Dikeh an Ambassador of Peace for NCPC and this was not part of her visit therefore this claim by her is spurious, unfounded and should be discarded and seen by all Nigerians as a figment of her imagination.
Nevertheless, we appreciate her desire to partner with us in our peace building initiatives and in the area of pilgrimage sponsorship to the Holy Land.

But the quick to draw actress and humanitarian, one who doesn’t normally shy away from engaging any in a tug of war, not one to allow a slight to go totally unnoticed, she quickly responded to the refutation by the commission, in what some have considered a face saving measure (why she would need to save face we don’t know) by releasing an unofficial rebuttal of her own on her page thus-

MY NAME IS KING TONTO DIKEH Best believe I will never Lie on a human being talk more of a COMMISSION OF A FEDERATION.I will only simply say This is LIFE we all know what can go wrong in I Isec But we moveeee….Coming from a place of leadership and Peace I wouldn’t fight this BUT I WILL WALK AWAY WITH MY HELD HIGH AND GROW ABOVE IT….THANKS”

Maybe this her supposed dignified final response has ended the whole drama or is it brouhaha afterall. The lesson learnt from it all would be that one would be far more careful next time, to make sure things are done properly with witnesses (lawyers and co) and with proofs too and solid agreements made, before any announcements. Better still, the announcements should rather come from those that made the appointment in the first place rather than the appointee.

Though in this case, Tonto claims to have video evidence to support her claim, but she has said instead she would move on without adding more pepper to the already quite spicy issue.