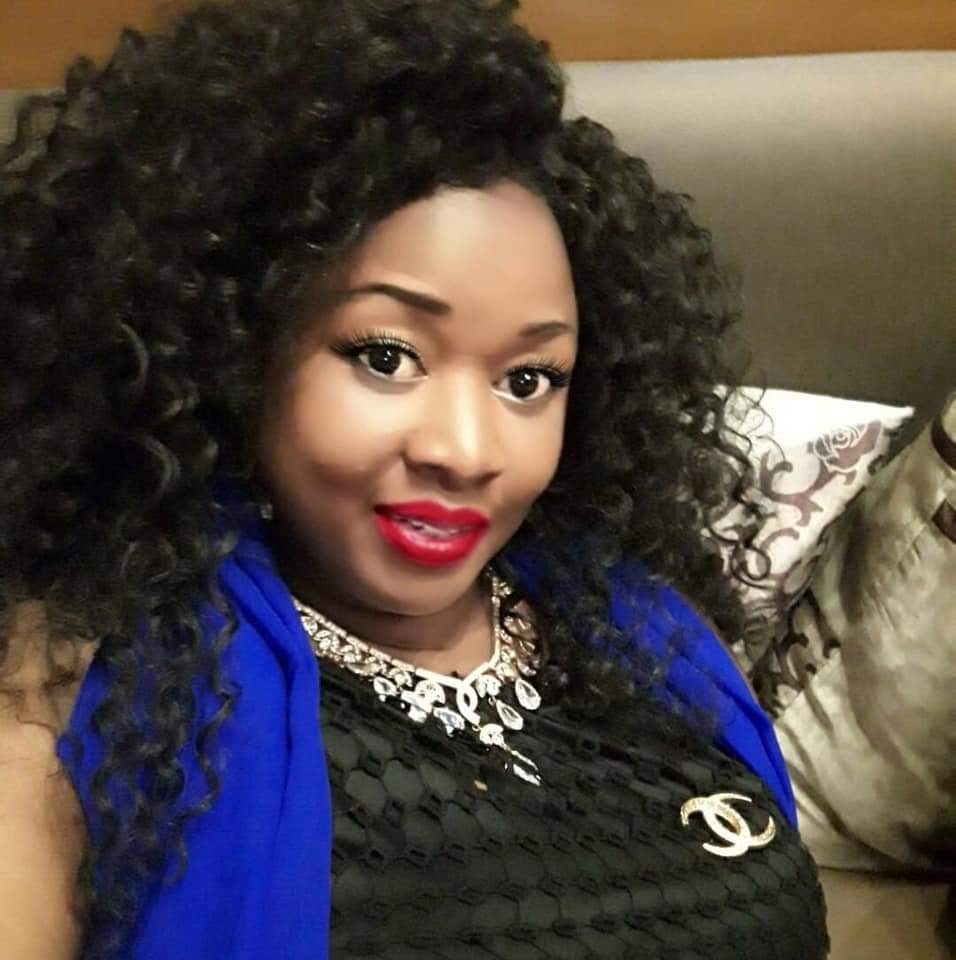 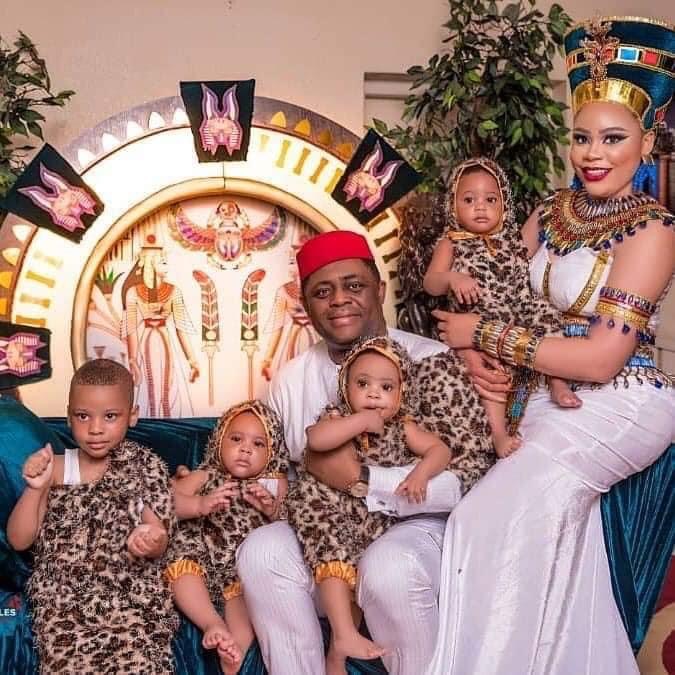 ….you are the insane one and not FFK. You are also an ingrate along with with your family members and more, so claims Regina Fani-Kayode.

It’s very obvious, quite so too that Mrs. Regina Fani-Kayode, who claims to be the first wife of the motor mouth former Aviation minister didn’t take kindly to Precious Chikwendu, also a Mrs. Fani-Kayode usurping her and her role as the madam of the house from her husband’s home several year ago. In fact she must have been livid when Precious took over the home she had built and for all the years she played the role of FFK’s wife and remained in that home, she must have been mad angry and never forgave her. So now that the 7 years interregnum has finally ended, it is the opportunity to take her to the cleaners and wipe on the floor, for her effontery.

Truth be told, whatever it is that Precious herself is getting now she actually deserves, except we are going to lie ourselves and want to be purveyors of lies, who would see the truth and call it another name or colour it to suit whatever it is we wish it would become.

Since Precious enjoyed the good and had her fun alone while it lasted, she should also be strong enough to endure the negative part of it too, without complaining. She should have known that there are 2 sides to a coin. Life is about ying and yang, if the yang came first and it was all rosy and fair, then when the yang comes and it’s the opposite, you dig deep and manage that part too, just like you had the fun and rosy alone.

So FFK and his supposed friends on his behalf took his estranged wife-Precious to the cleaners not too long ago. She was practically called names that most sane people wouldn’t call any one they like or have liked or better still loved before. She was literally addressed as a lady of easy virtue, a crazy or certified mental case wannabe, a gold digger, some that is terribly troublesome and more. How FFK preferred to address his now estranged wife and mother of 4 of his kids shocked everyone to the bone marrow!

In order to at least salvage the little left of what had become a ruined reputation, Precious maybe advised by her advisors who may have pushed her to respond in kind. So Precious literally sent out a robust response touching on all areas, where she had been pinched and slammed and then she even made some allegations against her erstwhile husband herself, claiming categorically that he is violent man, a domestic abuser, a womaniser, a blatant liar, someone who has mental health challenges and more. She literally took the father of her 4 kids to the cleaners too and by so doing, got some of her fans, admirers, sympathisers and followers very happy.

While thinking that would have shutdown FFK with her salvo, but instead of the man himself to respond to his estranged wife’s attack on him, it is his wife, the one before Precious became the usurper, who had decided to come out in his defence with guns on hip blazing with force as a first salvo as she claims. Meaning that if Precious dares to respond again for any reason, she would be literally obliterated with the pandora’s box of expose that would be unleashed against her.

Would Precious dare the hornet???

We would gladly wait to know that. But from the look of things, it’s quite obvious that this is one battle, in fact a war she cannot win. Everything is staked staggeringly against her. Too many people (witnesses) that can stand against her at the drop of a hat. She may only win the public’s sympathy and that may just be it. What is obvious is that very intelligent people, have painstakingly built things against her over a time that can be used to get her. The law is actually about facts and proofs and not about mere rhetorics that may be true, but that cannot be proven especially if there are no witnesses to substantiate your allegations.

My name is Mrs. Regina Fani-Kayode and I am the first wife of Chief Femi Fani-Kayode. We were married in 1997 and we are still married up until today.

Precious Chikwendu, a strange woman that he took under his roof, married under law and custom and lived with for seven years has written things about my husband which are not only untrue but also downright defamatory and scandalous and I will respond to her with the following as a first salvo.

Precious, you are just a sick woman and a big liar. I know you collected over half a million USD dollars from Femi within the first few months of meeting him for a fake investment. We have witnesses to prove it and remember that you even asked me to thank him for it. I also know he set you up in one business or the other four times in 7 years and got you offices etc. but you squandered it all.

When you came to my husband and took over my home you and your family were like hungry refugees. You had nothing but rubber slippers and you were desperate for help.

My husband sent three of your siblings to the hest schools for seven years and took care of their every need yet you now slander him and insult him not minding the effect it will have on your own children. That in itself proves that you are insane.

You say he has mental issues meanwhile you were the one that was locked up in a mental hospital for one month after trying to kill him and his children. You stayed in the home of a man with mental problems for six years and allowed your mother, Aunty, two brothers and sisters to stay there too?

Who are you trying to fool? You are nothing but a wretched ingrate and, like Madame Kemi Olunloyo said, a pathological liar. And God will punish you and all your siblings for your ingratitude and lies.

You knew he was still married to me because you and I spoke countless times on the phone and you even stayed in my room and wore my clothes .

You had nothing when he took you in, you are so ungrateful. 6 of your relatives lived in my house for 6 yrs and they were all depending on Femi for food , upkeep, medical bills and school fees. Even your sister’s wedding was paid for by him .

But that didn’t stop you from plotting with your gang to kill him. You admitted to me about being naked in the hotel room with a man on the night FFK caught you.

I know the huge amounts of money he spent on you and your family and I’m sure you can’t deny that, that’s why his friends tagged you as a gold digger.

Your inability to love your children which you attributed to a medical condition was well tolerated by FFK and twelve nannies and nurses were working round the clock to keep you from harming them but you still got to beat up Aragon badly and bleached their skins till they broke out in sores.

You are a mother from hell and a horrible woman. In one of your dramatic fits, you pulled knifes to stab Femi and the children and police were called in stop you.

FFK never laid hands on you, even on the day he caught you in the hotel room with your lover. Is that the act of a violent man ?

All his male friends you have been offering your body to have already confessed so please stop trying to blackmail them. Stop working for those criminals who are just using your body to rip off rich men.

There is so much more to expose about your wickedness but I really don’t have time for your drama this year.

I am the reason Femi tolerated your nonsense for so long but enough is enough, I will not allow you to kill him because of your greed. He’s too busy to answer your stupid tantrums and fantastic lies, your media rants lack facts and the powerful truth will always prevail.

Your constant threats to kill the children is why Femi is afraid to leave them with you, you can’t even find the time to call them till now.

You think raining insults daily on their nannies is the best way to encourage them, instead of talking to your babies. And why were you stealing half their salaries when you had your own allowance ? All the evidence will be presented in court soon.