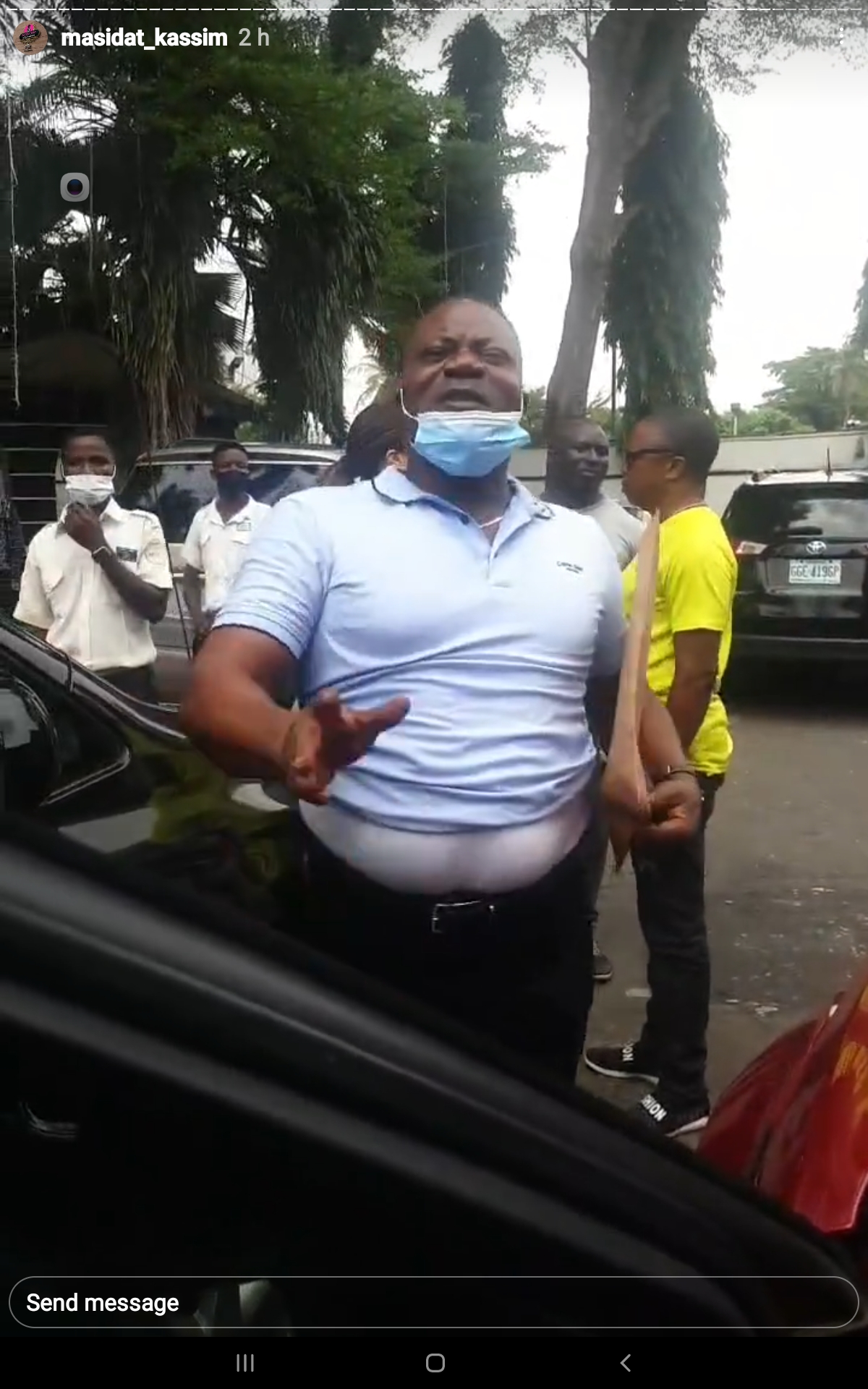 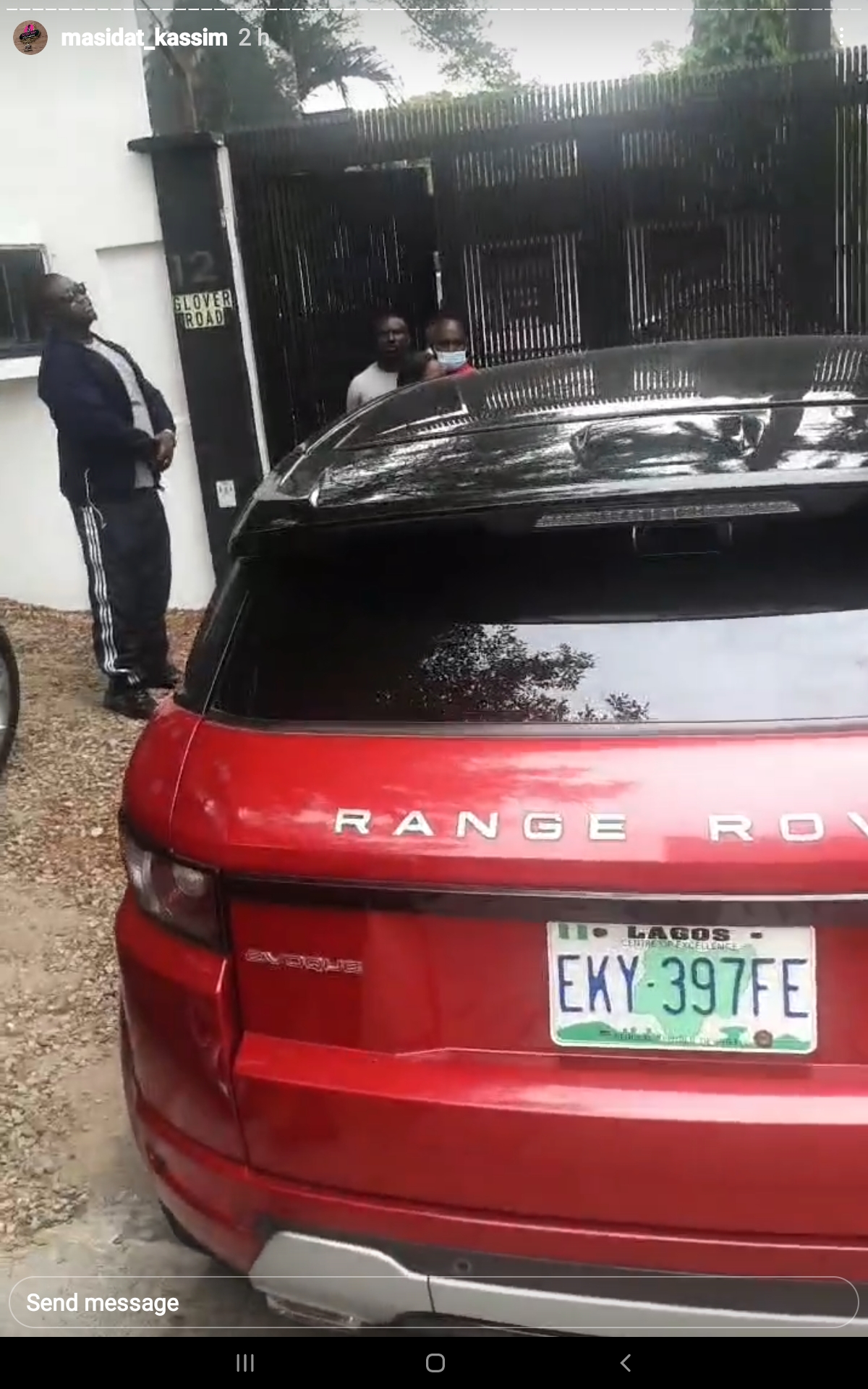 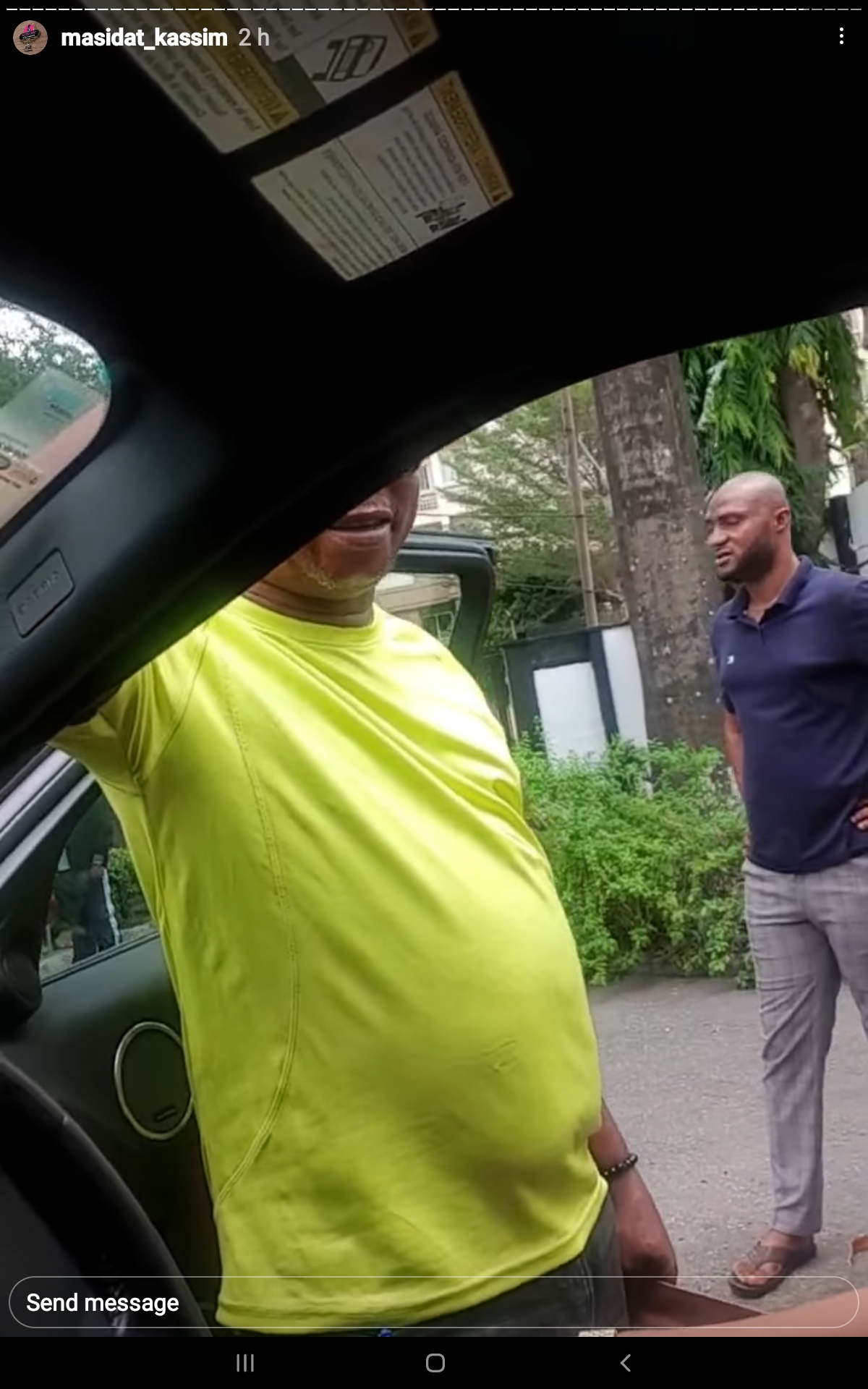 So okay the dazzling fashionista by name Masidat Kassimm who runs her own enterprise at Alausa, Ikeja Lagos and who comes from a famous, very well known family from Ijebu-Igbo, but who grew up more in Ibadan, Oyo State seem to be the one that everyone had been waiting for to lead this onslaught and give the first salvo against ADenike Margaret Balogun.

And since she came on the social media to drag it without a care in the world with the Lagos happening fashionista extraordinaire with the bodacious shape, all hell has been let loose on the lady most call Nikky Bizzle.

What was actually the issue between Masidat and Nikky? So Nikky’s brand had advertised an event flyer to celebrate Mother’s day and the package had been food, wine and outdoor cinema for N30,000 per head picture of the said E-flyer is included in the story, so Masidat and friends had thought why not be a part of the event, so she got in direct contact with Nikky about it and she was told to go pay into her account so that their spaces would be kept, as it was a first come first served thing. So N120,000 (one hundred and twenty thousand Naira) was paid into Nikky’s account. The E-flyer never added any proviso of any kind.

Then about 4 more friends of Masidat were interested and asked her to also help secure spaces too, so after her own payment has been made, she called Nikky again about more spaces and asked that it be booked too, since she’s already paid for 4 earlier. So Nikky asked for immediate payment, but since Masidat couldn’t be calling her people to pay so that she can get the spaces booked, she just asked that the new 4 spaces be forgotten then since it was going to be loads of stress, but she then reiterated that the earlier 4 paid should be well secured already. Only for her to hear something knew then from out of the blues, that she must get 6 more people to make 10, so they can watch the outside cinema that was already inclusive of the deal from the get go.

This wasn’t what was stated clearly on the flyer before and this was a new must do now added all of a sudden! This was just tantamount to shifting the goal post in the middle of a match. So since you can’t expect your costumer to be the one advertising your product or services for you and you are the one that has breached a contract, she was told to pay back the N120000 that was already paid to her.

That was when the drama began.

First she accused Masidat of being rude. Secondly, she now suddenly announced that she has a 14 days policy of paying back money after being paid, something again that wasn’t also on her flyer. Thirdly, she now asked Masidat who had paid her directly to get in touch with her staff at her office for her refund, then she blocked Masidat on all her contacts and social media handle and became unreachable.

When Masidat couldn’t reach her anywhere and after getting in touch with her office and she was told to wait 14 days, she decided to go public about the matter and there began the exchanges. Nikky would unblock her phone temporarily to send threats and nasty things and then quickly block the contact again. In response, Masidat decided to give her back in kind too, bullet for bullet, bomb for bomb on social media space.

Apparently there had been many confrontations either physical or virtual with loads of other disgruntled clients before with Denike, but it seem like this is the 1st person that was ready to stand toe to toe without flinching with Nikky Bizzle. One in particular who isn’t afraid of what may come or their perception of who they feel that Nikky might be or she might be connected to or who wouldn’t want to take it to the gutter with her, if it demands for that.

Masidat is Ibadan bred, though from Ijebu-Igbo in Ogun State. She’s one lady doing well in her own corner and by her own standards and not the type that needs the social media for any reason for hype or uplifts. From our findings, she’s in fact one of the children, the last daughter for that matter of a well to do, more like very wealthy old money from Ijebu-Igbo. She’s one hardworking, no nonsense lady, who has worked very hard to set herself up, not needing to depend on dad’s money. She runs her own business somewhere in Ikeja, Lagos, like already stated above.

With Nikky Bizzle nearly every year brings about one issue/controversy or the other. A few years back, a client of her went ballistic over the way her wedding ceremony was handled by Nikky’s brand and the lady had to call her and her company out on the social media and they dragged it for a bit. Before people must have gotten into the matter so that the newly wedded lady, who had married a top footballer then to let the matter rest.

In order to have an idea of what kind of person Denike was as she has been tagged a chronic debtor by Masidat, so we decided to find out about some of the things that had trickled in. There was the case of Adele a Ghanaian lady, who fought with Denike and tore her clothes to shreds/near naked over N150000 as they grappled with each and it happened right in front of her mom and the kitchen staffs then. Apparently Adele had taken permission for treatment, which was granted and then she came back to work afterwards and it got to the end of the month and her salary had entered voicemail. It became a police case. She also owed Funmi her former manager at Mykonos N170,000 in 2019 and it nearly became a roforofo case too, till Funmi was prevailed upon and she left the money cursing her. There was also a Benjamin, her former account person, who out of his salary of N120,000 got paid instead N53,000, he didn’t fight her, but waited till when he was sent to the bank to deposit money which he normally used to do, he just took the exact amount of salary owed him from her money and paid the remaining into her account and stopped working. When she threatened to arrest him, he just gladly sent his home address. There are allegations also of her owing deejays, suppliers and others. So it seems like the debt owing thing is a common or better still regular thing.

From what we have heard, Masidat has vowed to get her money back no matter what.

Live report: Plain clothes policemen from where we don’t know have arrived at the Glover Rd location, Ikoyi with a supposed warrant of arrest to take Masidat in. She had gone to the location to go get her N120,000 as was promised her, but it seems like the money is not going to be paid. Drama on going and can be viewed live on Masidat page. 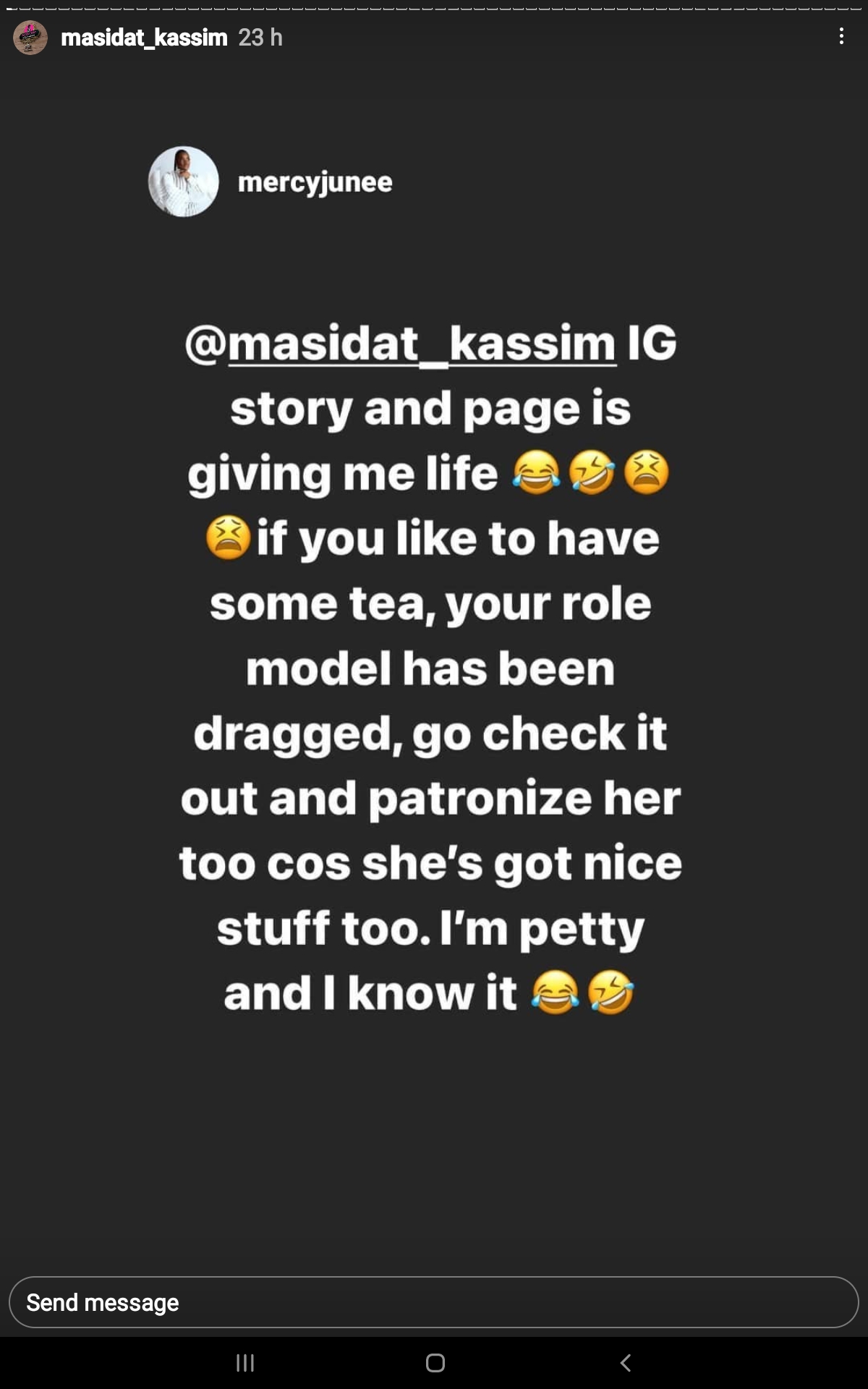 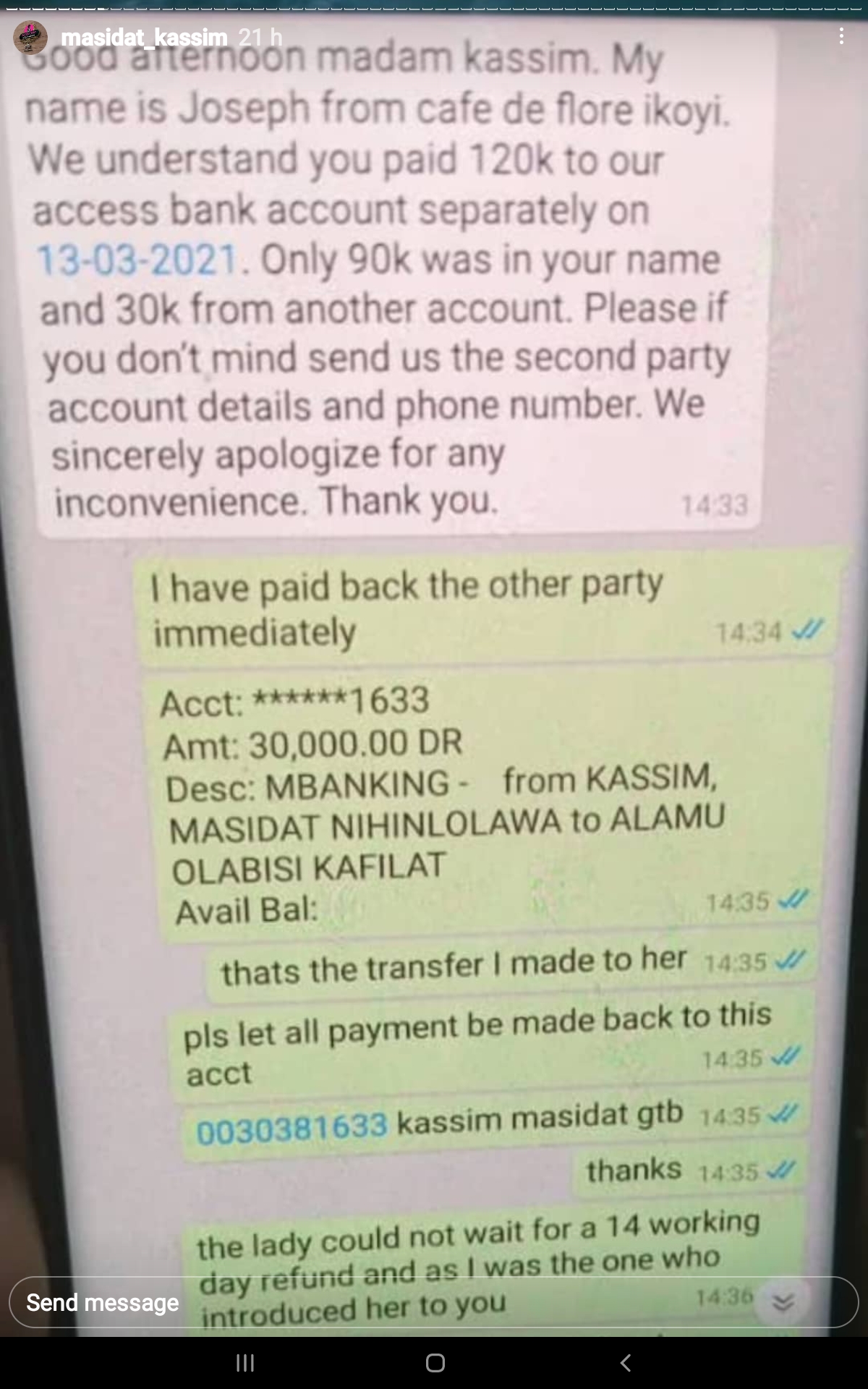 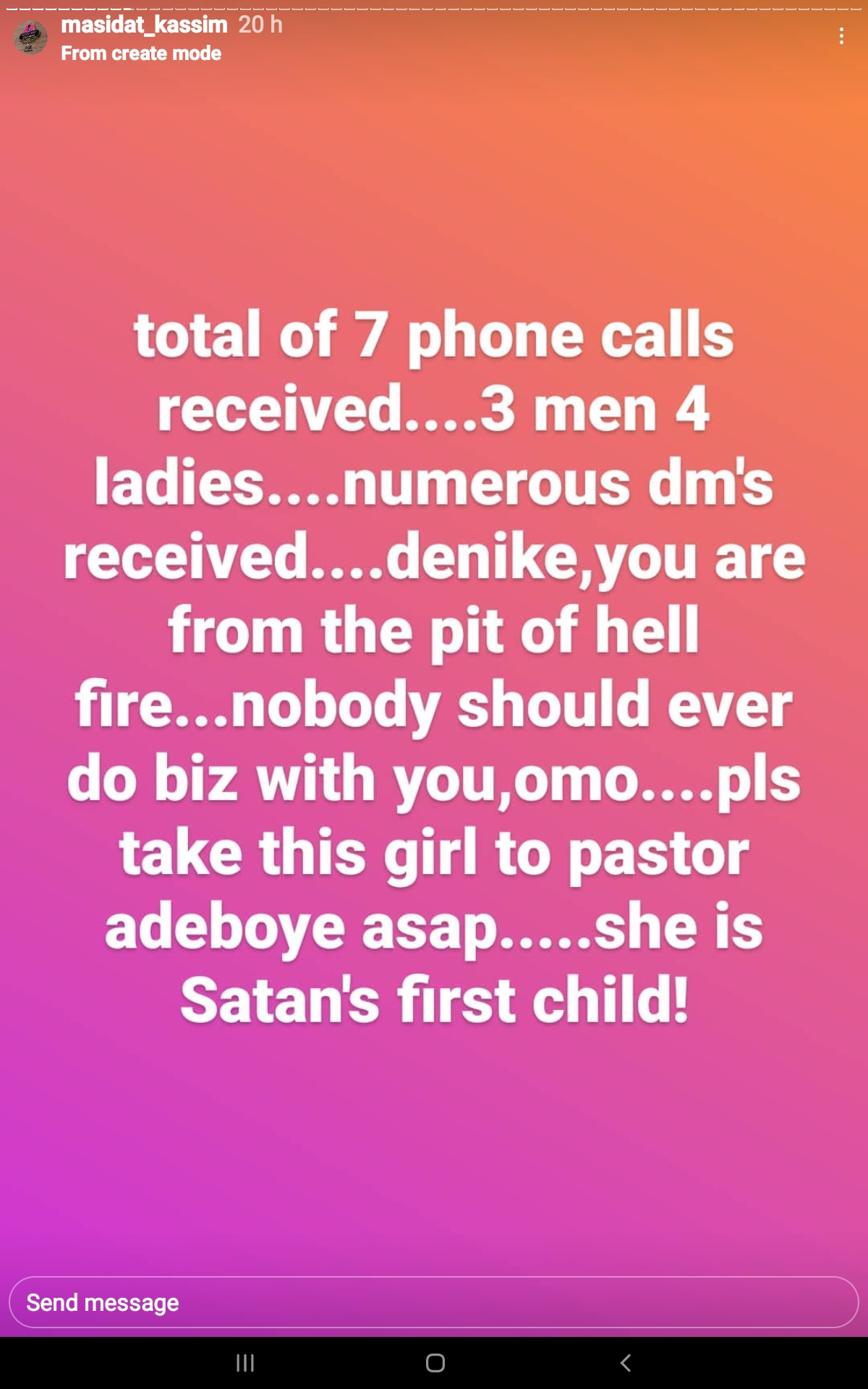 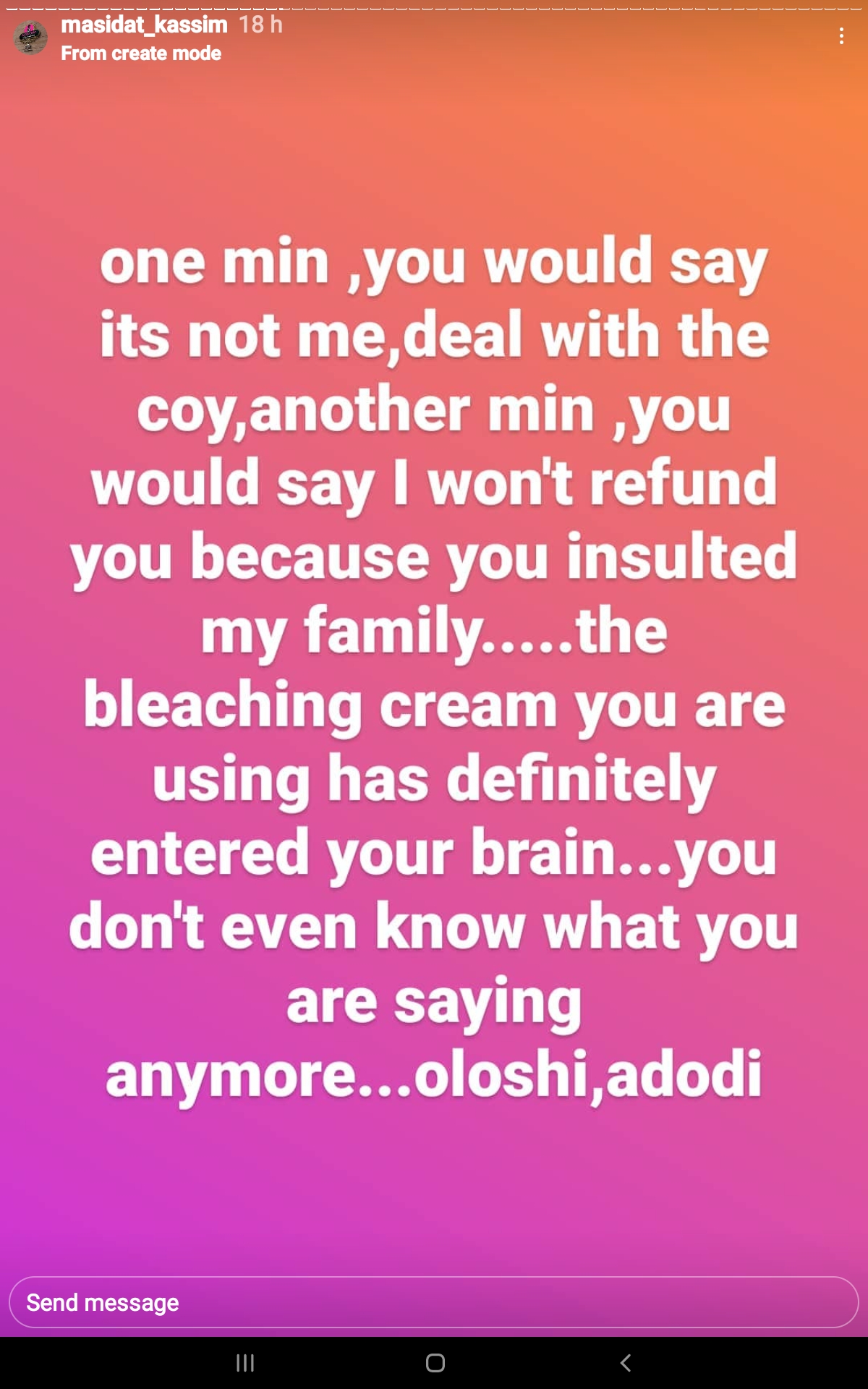 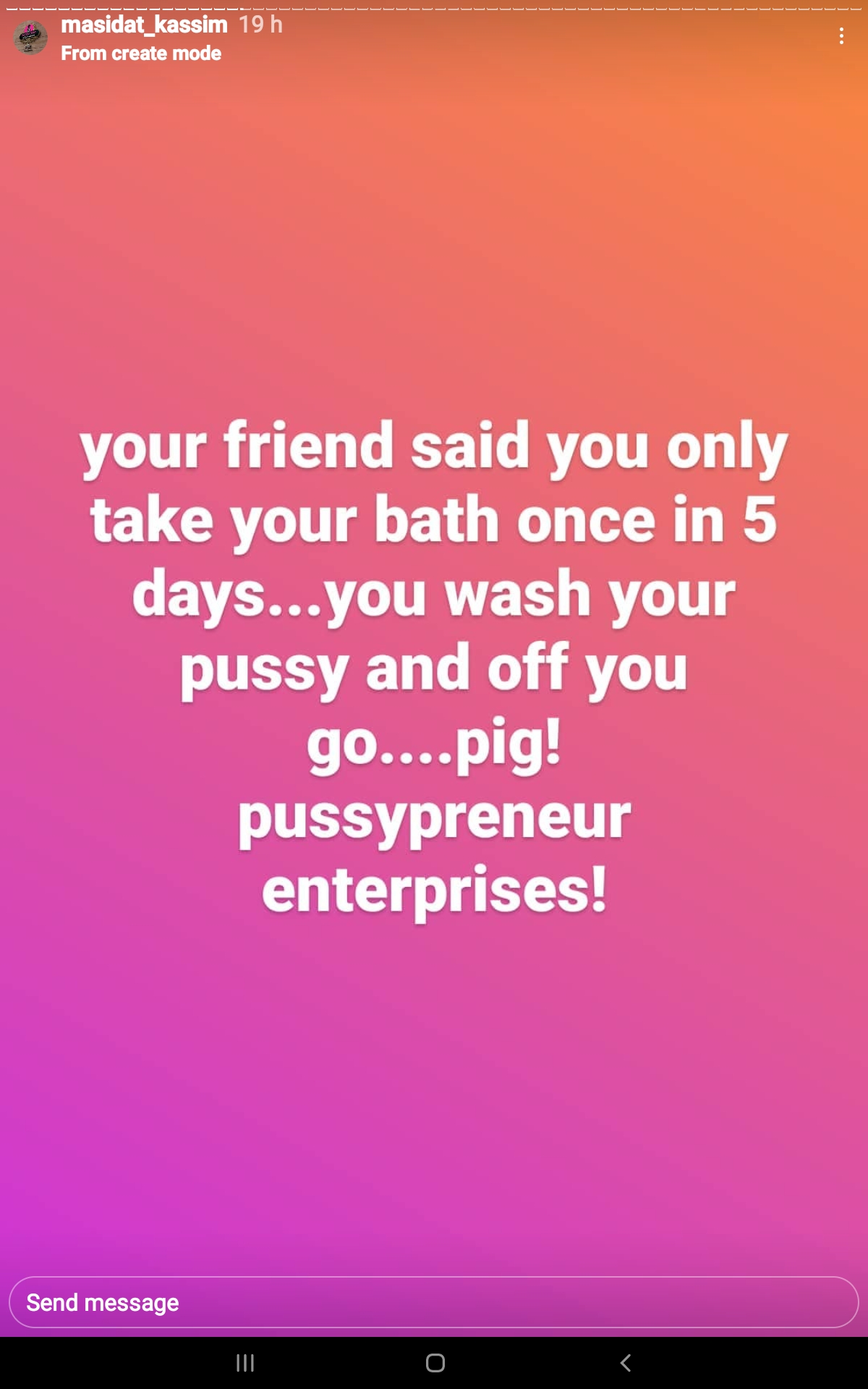 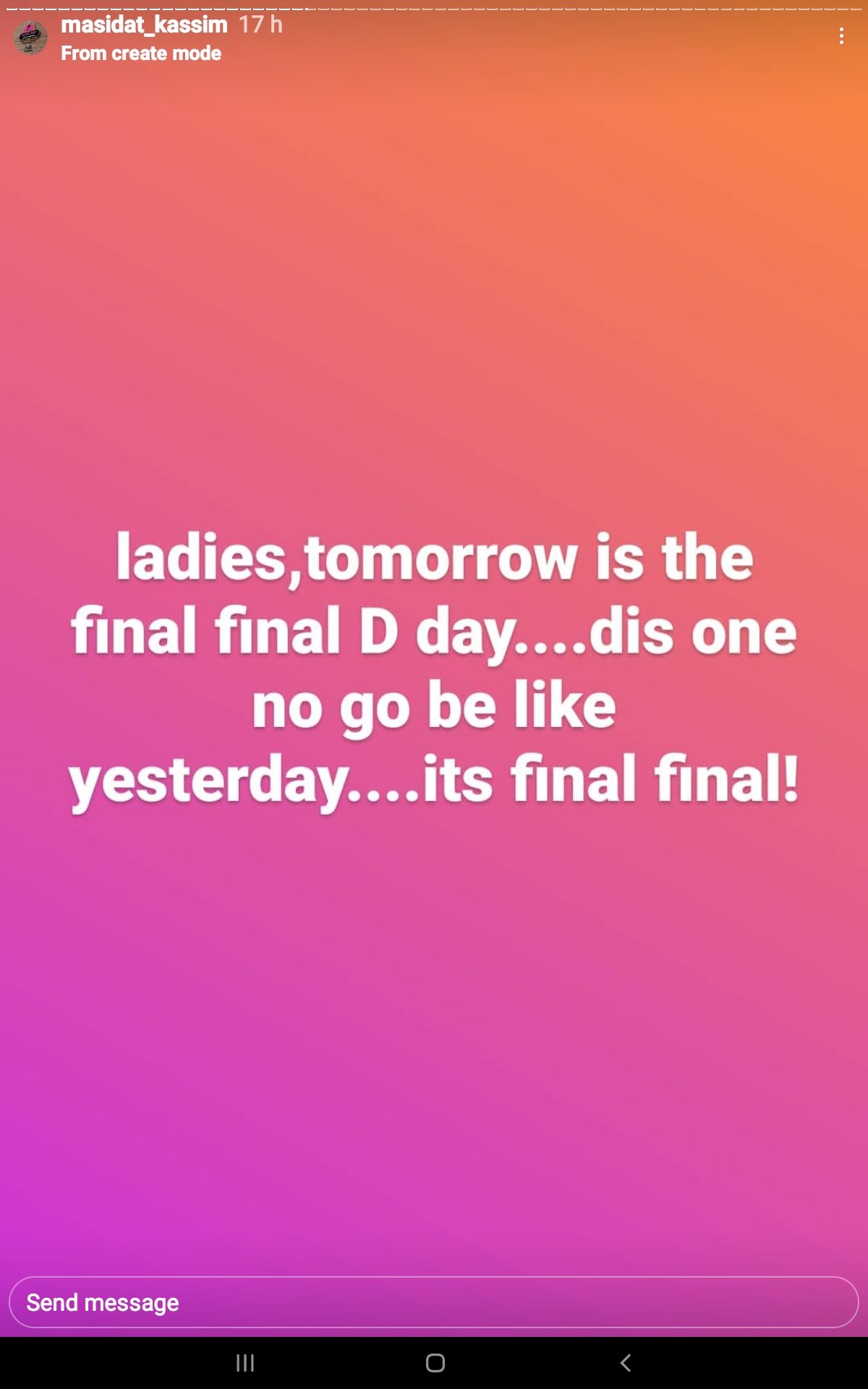 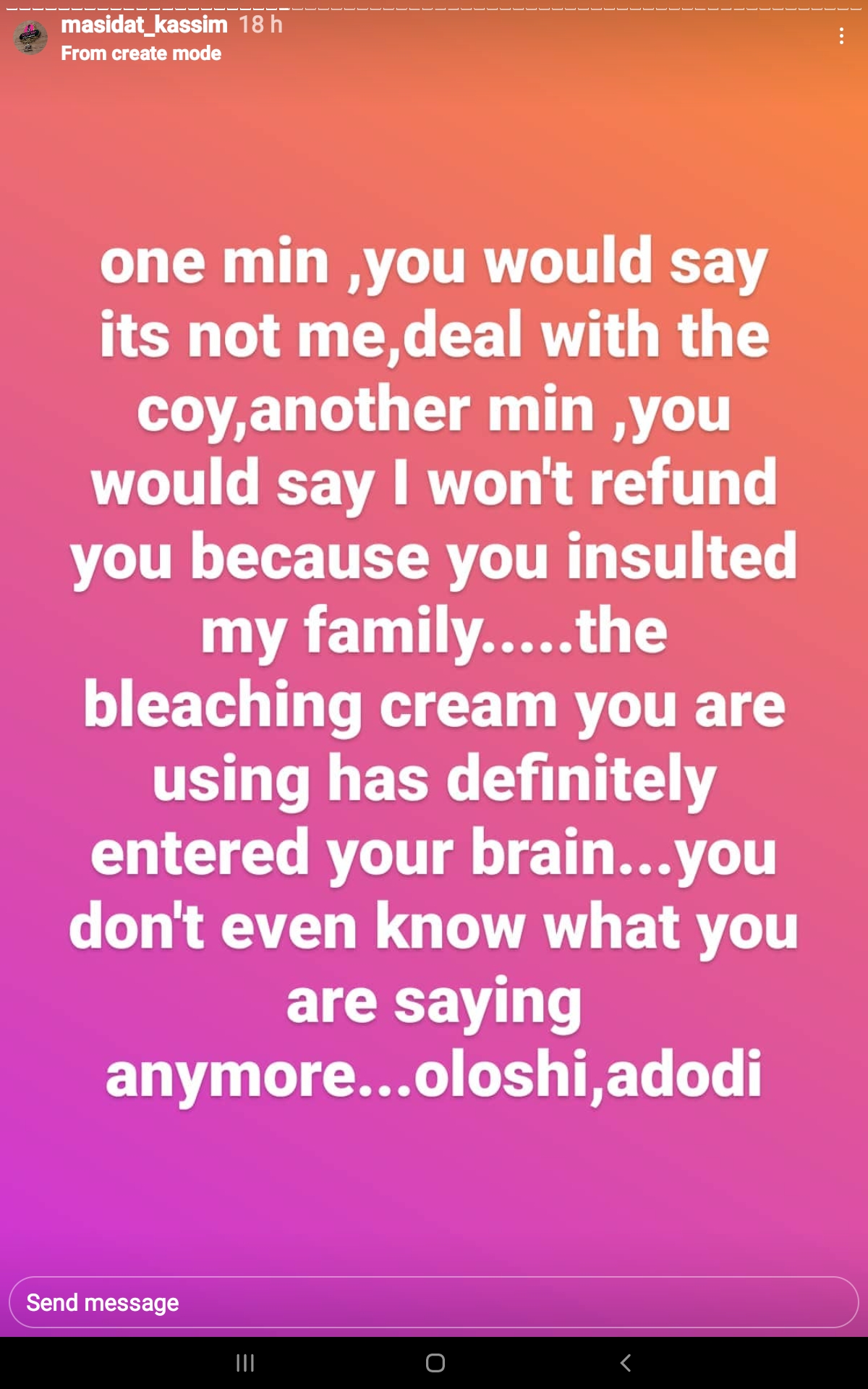 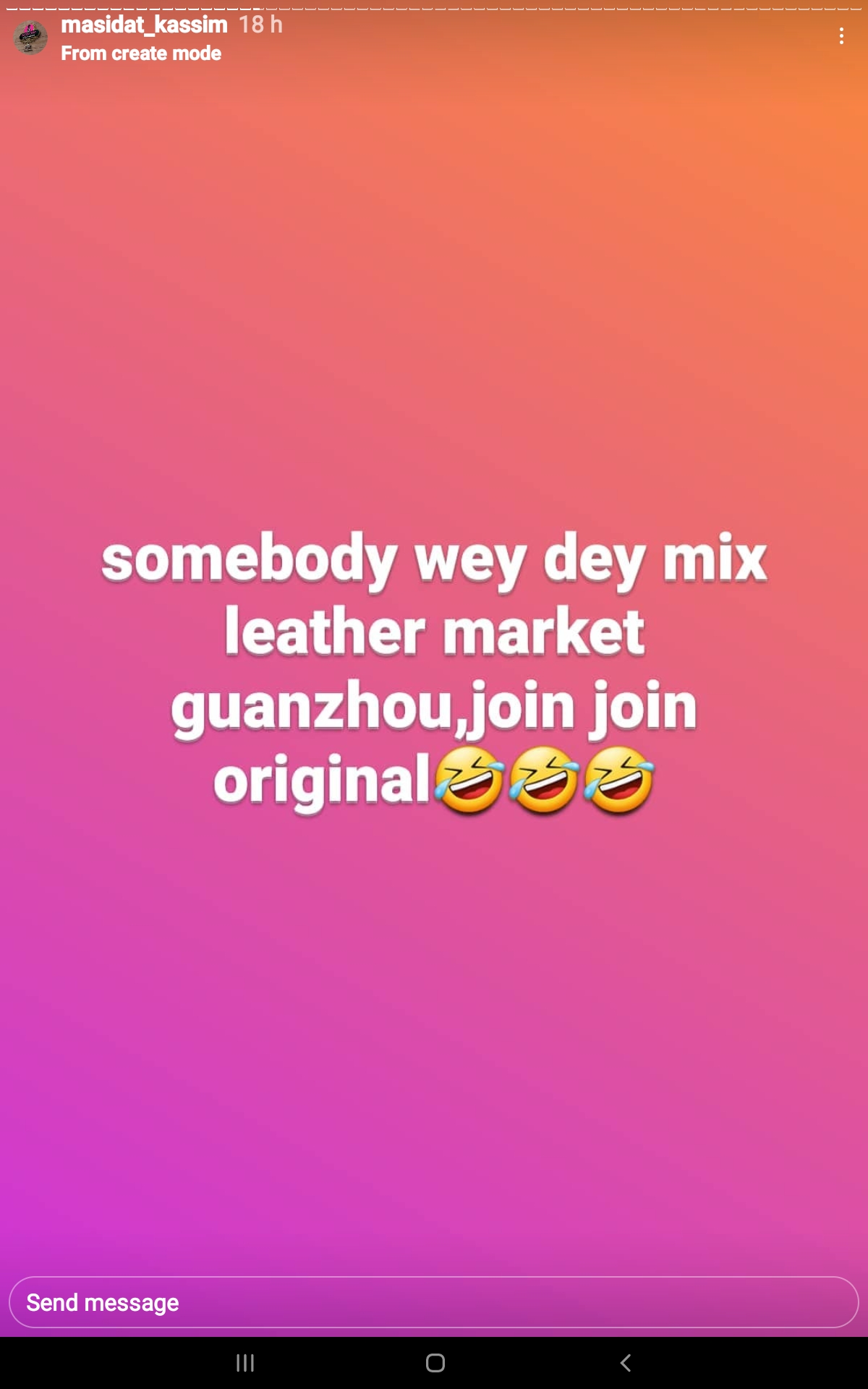 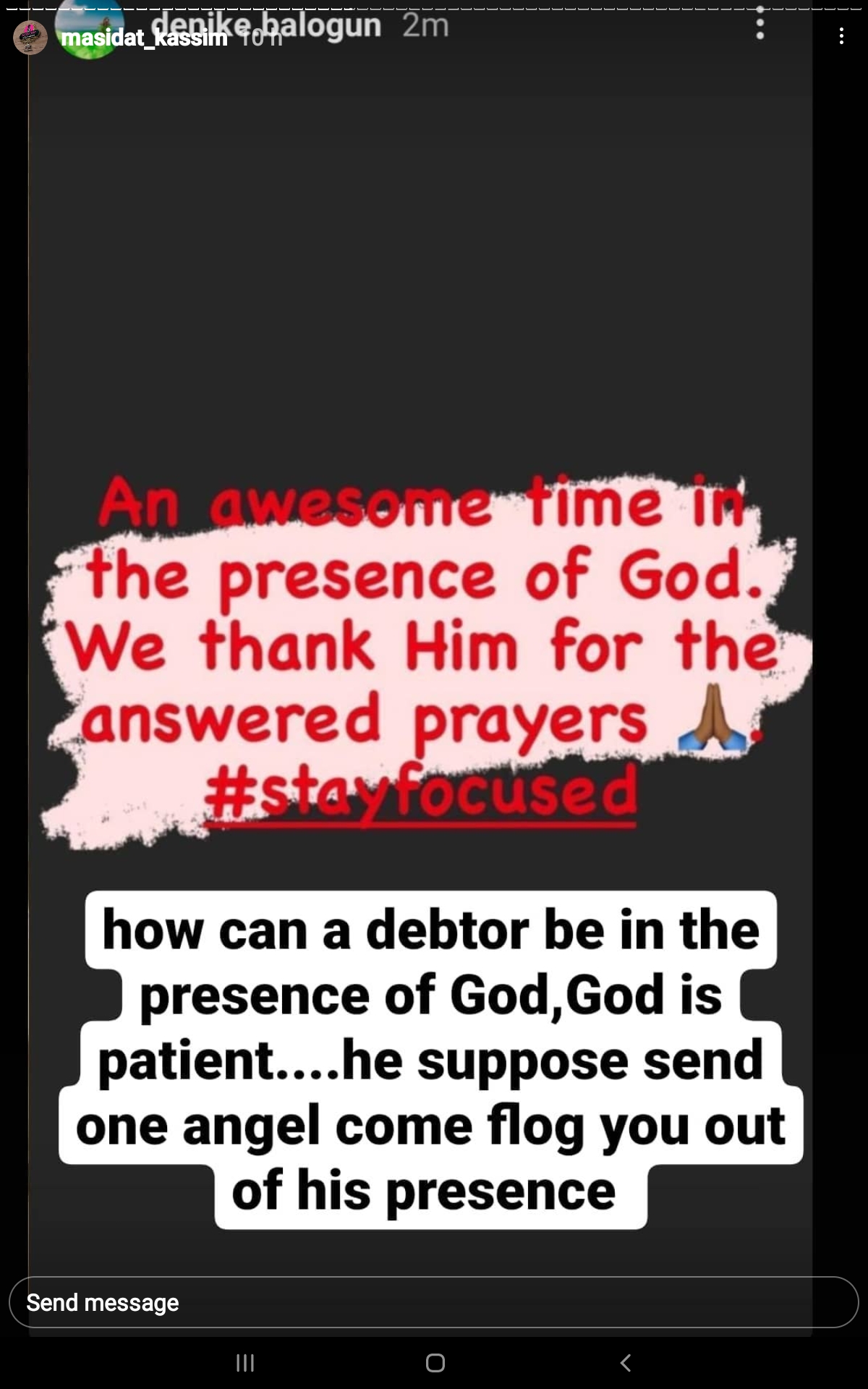 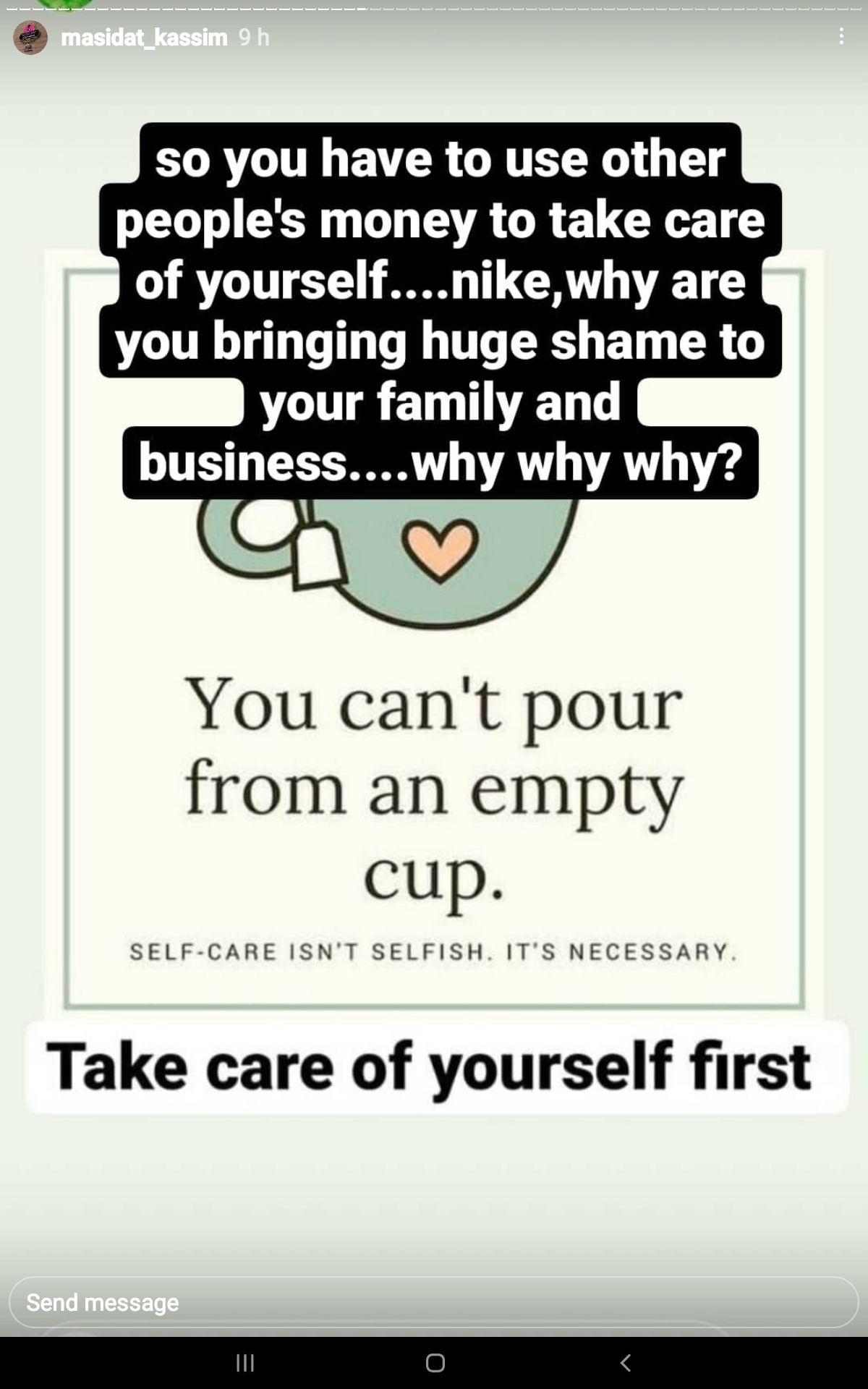 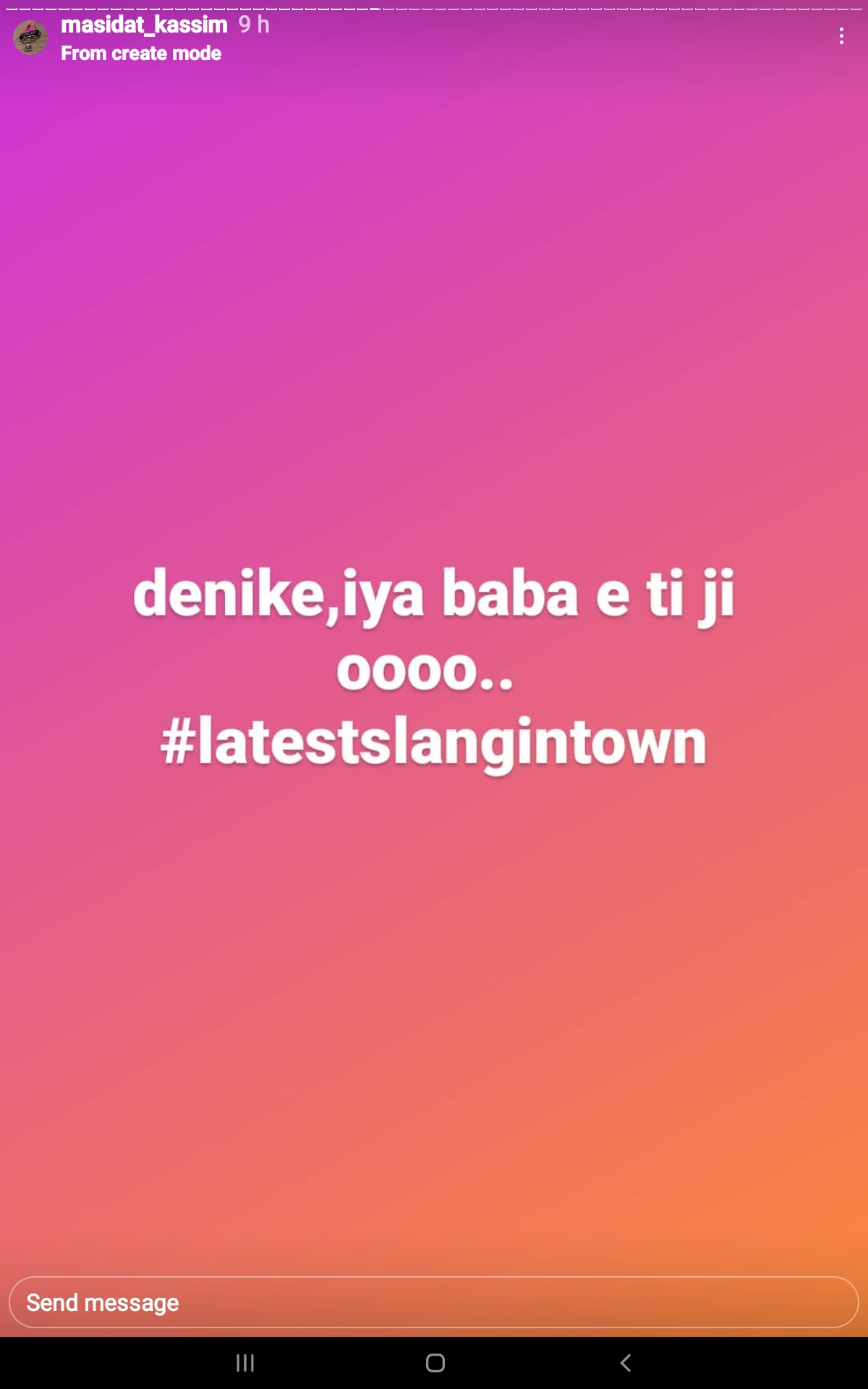 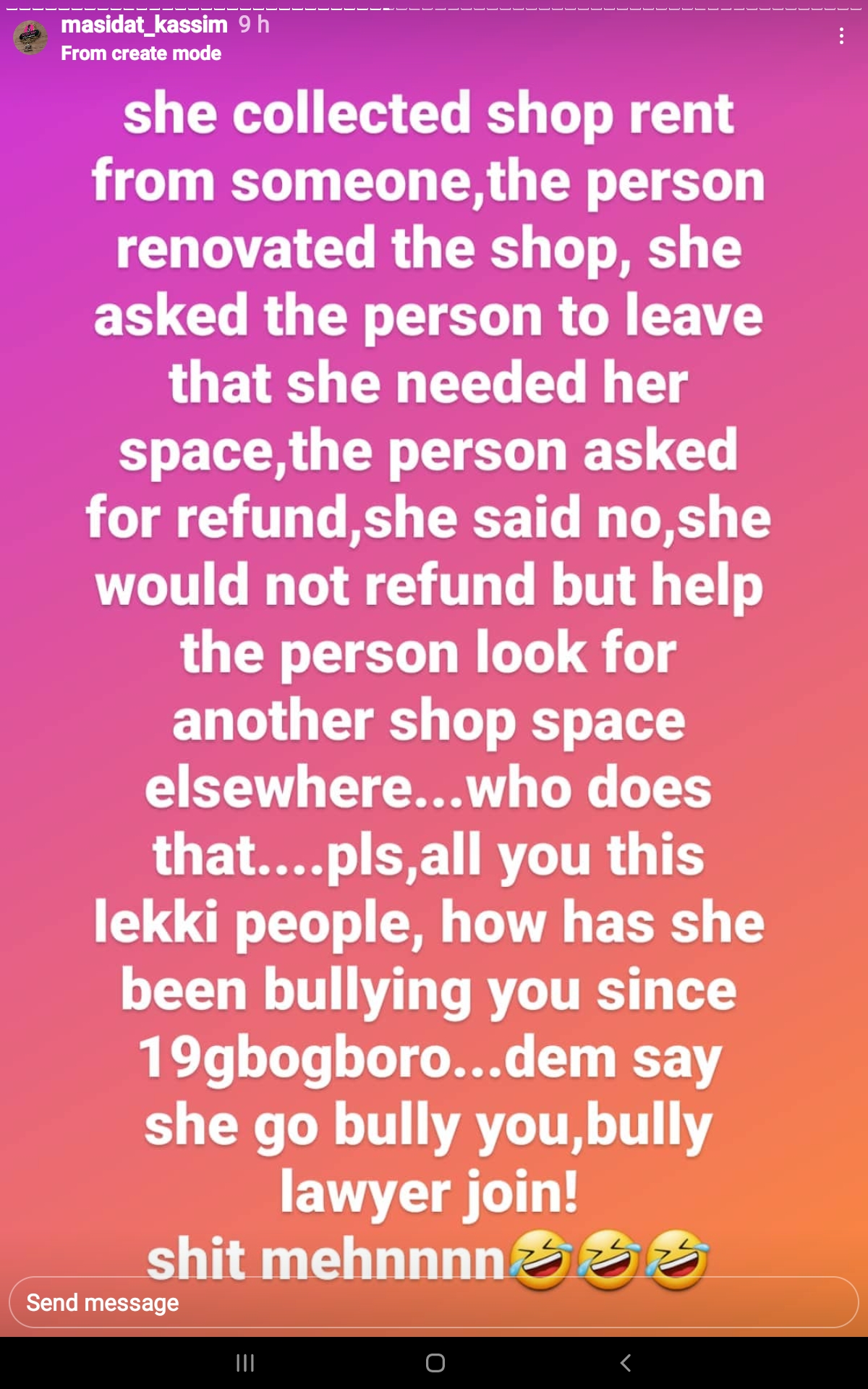 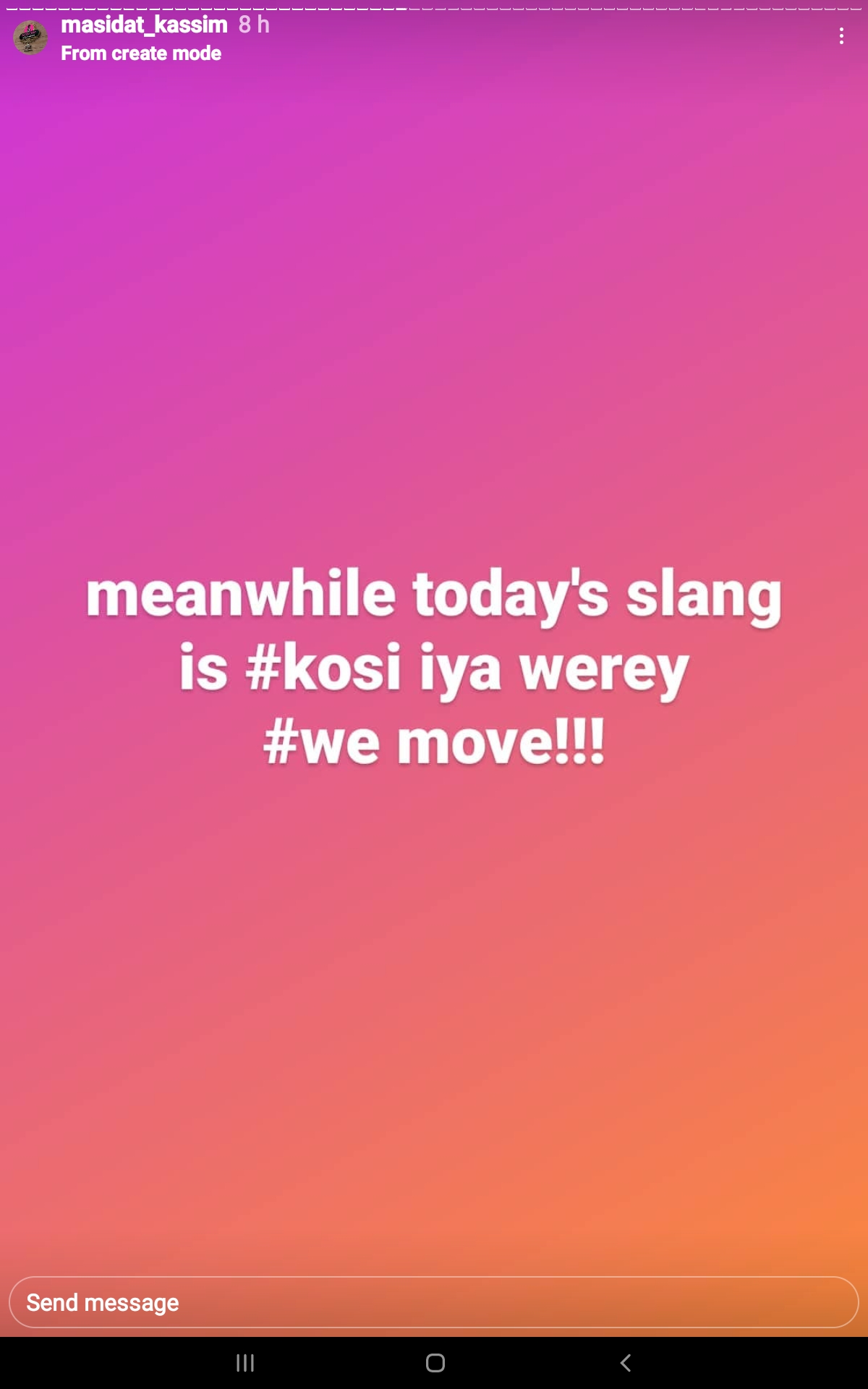 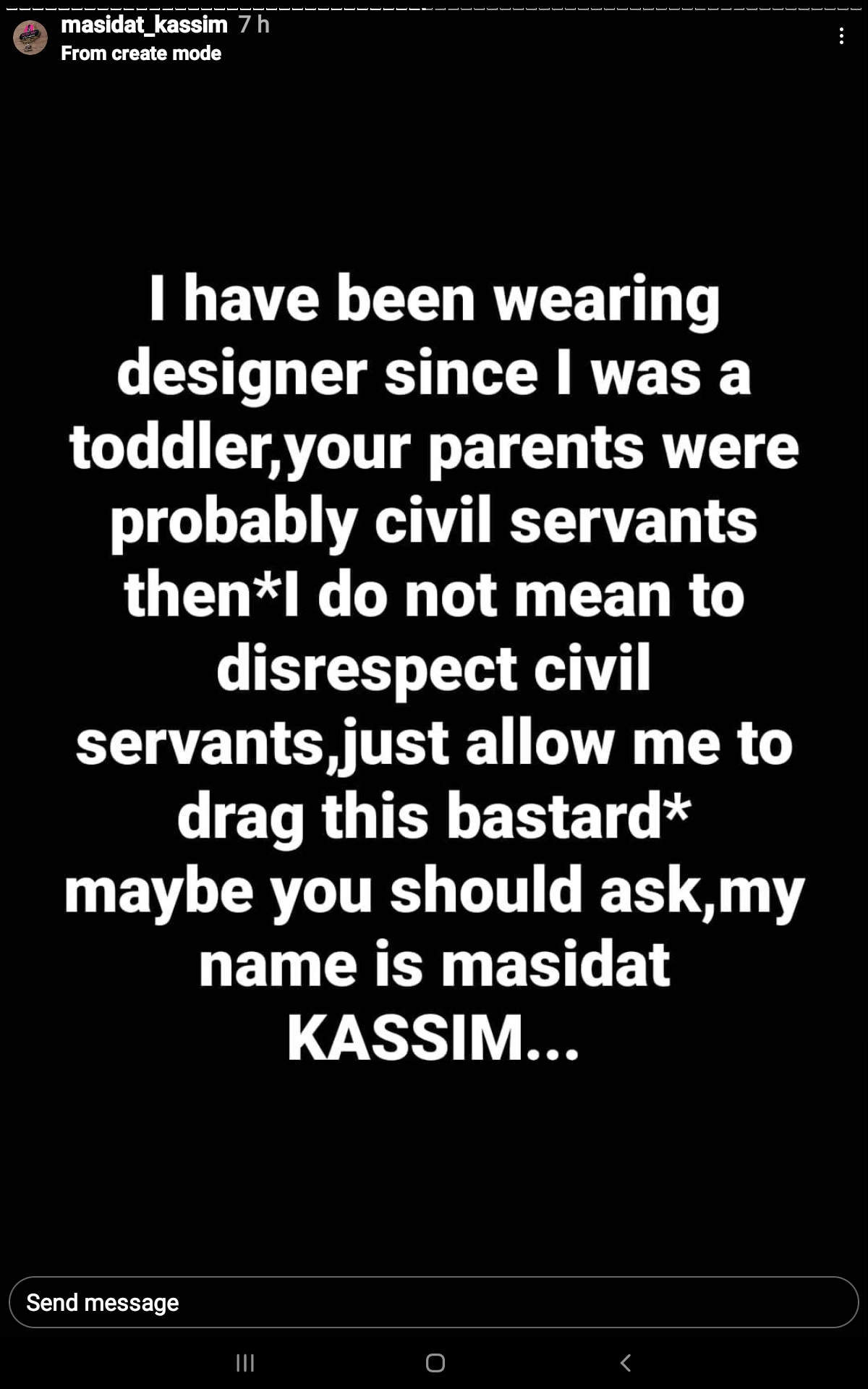 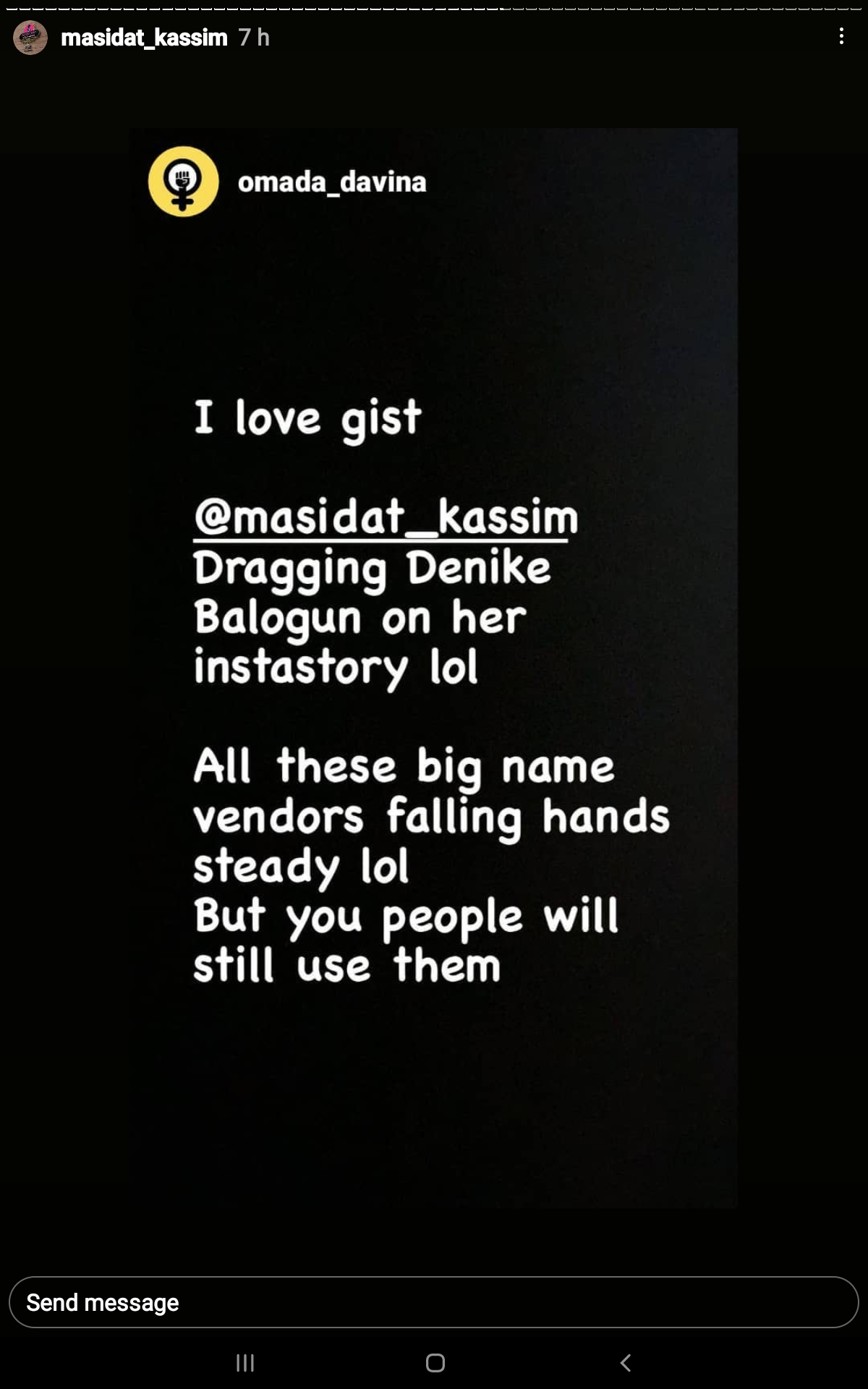 FINAL INSTALLMENT: DENIKE VS. MASIDAT FINALLY SETTLED WITH THE MONEY OWED PAID. BUT MATTERS ESCALATES AS IT’S NOW THE POLICE VS. MASIDAT OVER OVER FALSE DECLARATION
INSTAGRAM ON FIRE AS CLIENT DRAGS LAGOS BIG GIRL DENIKE BALOGUN OWNER OF MYKONOS/THE TEAROOM  LAGOS AKA NIKKY BIZZLE OVER A PALTRY N120000.
Comment