…..this voltrons are unrelenting, none is ready to concede a yard at all. It’s going crazy on our Instagram page. 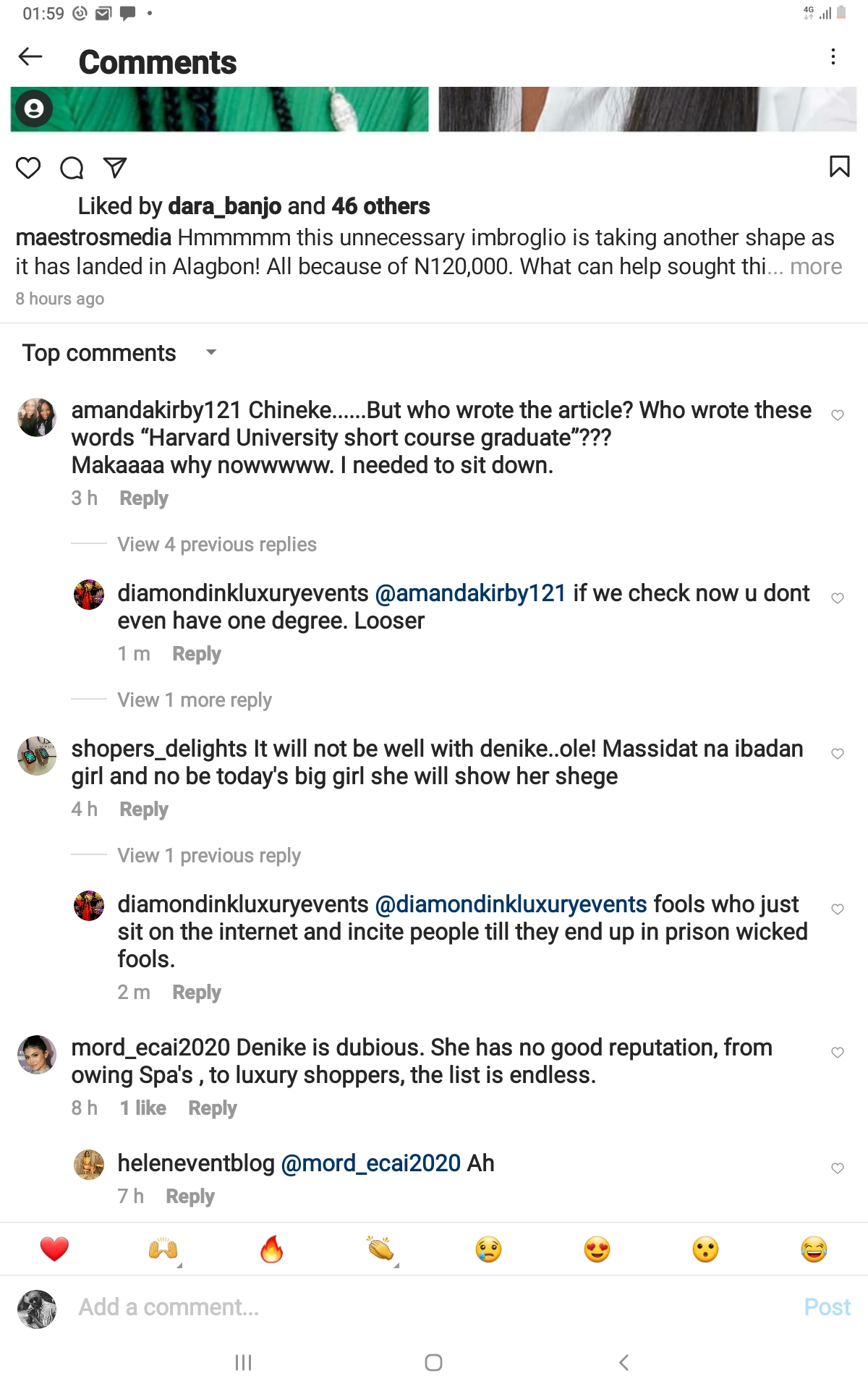 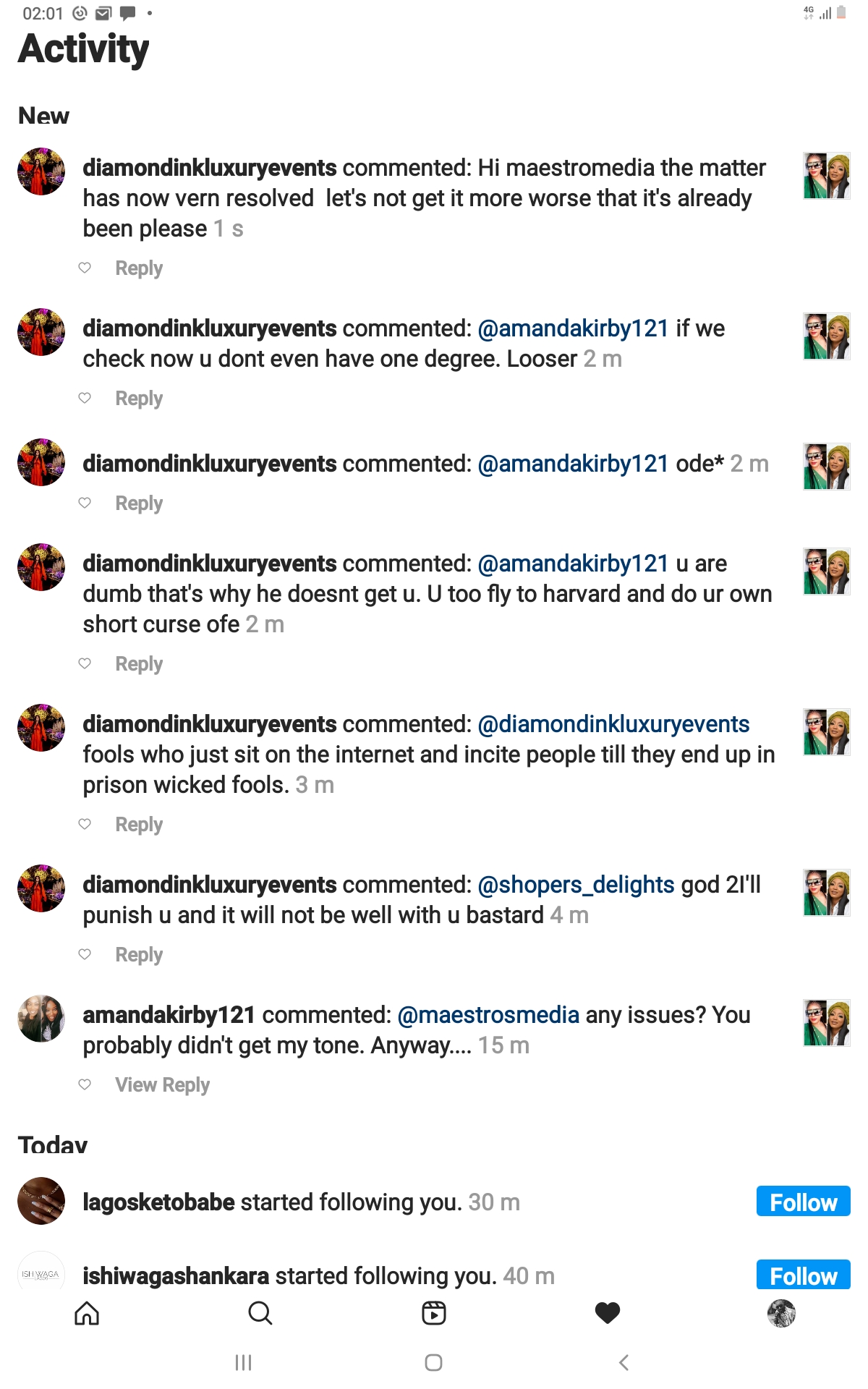 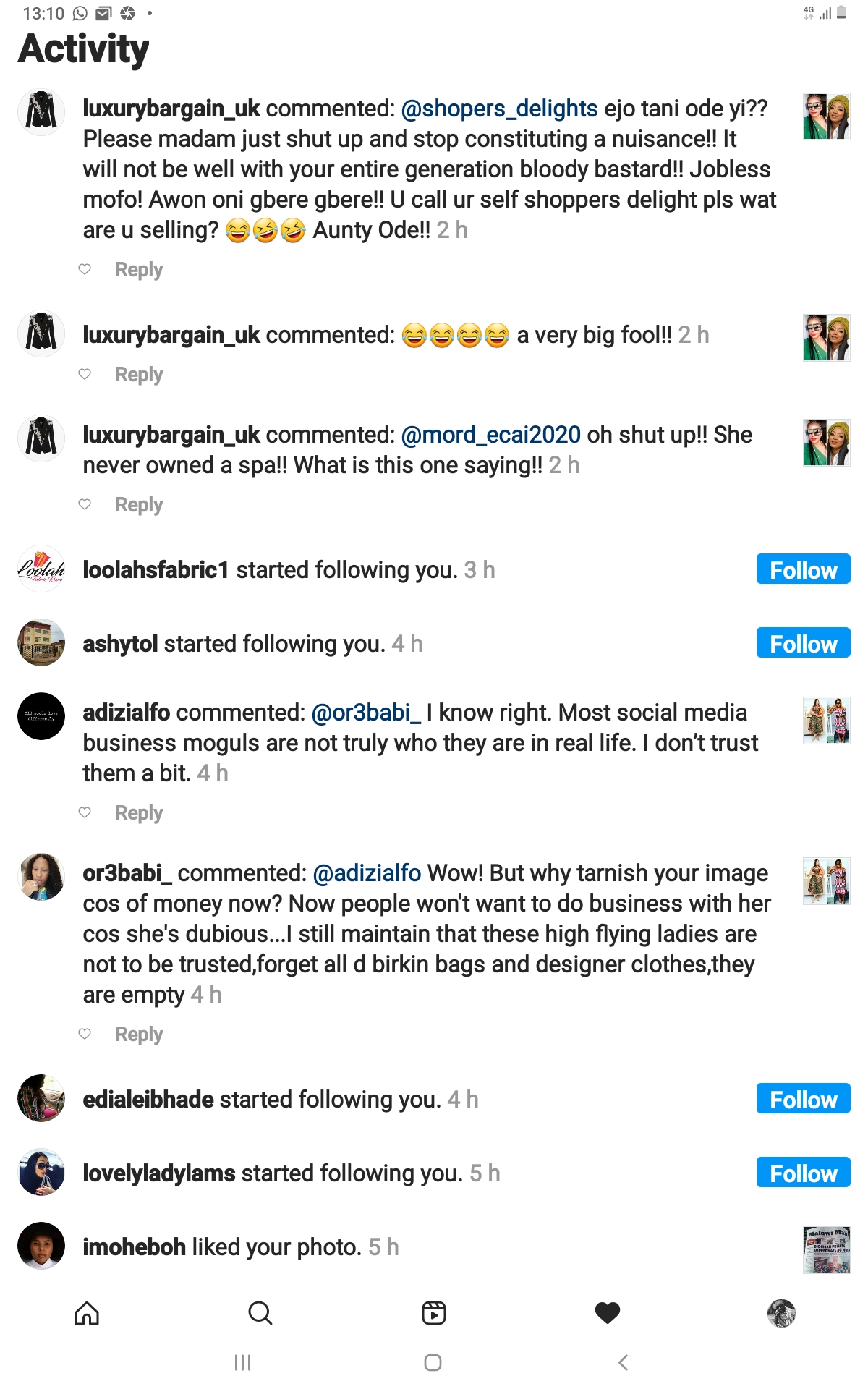 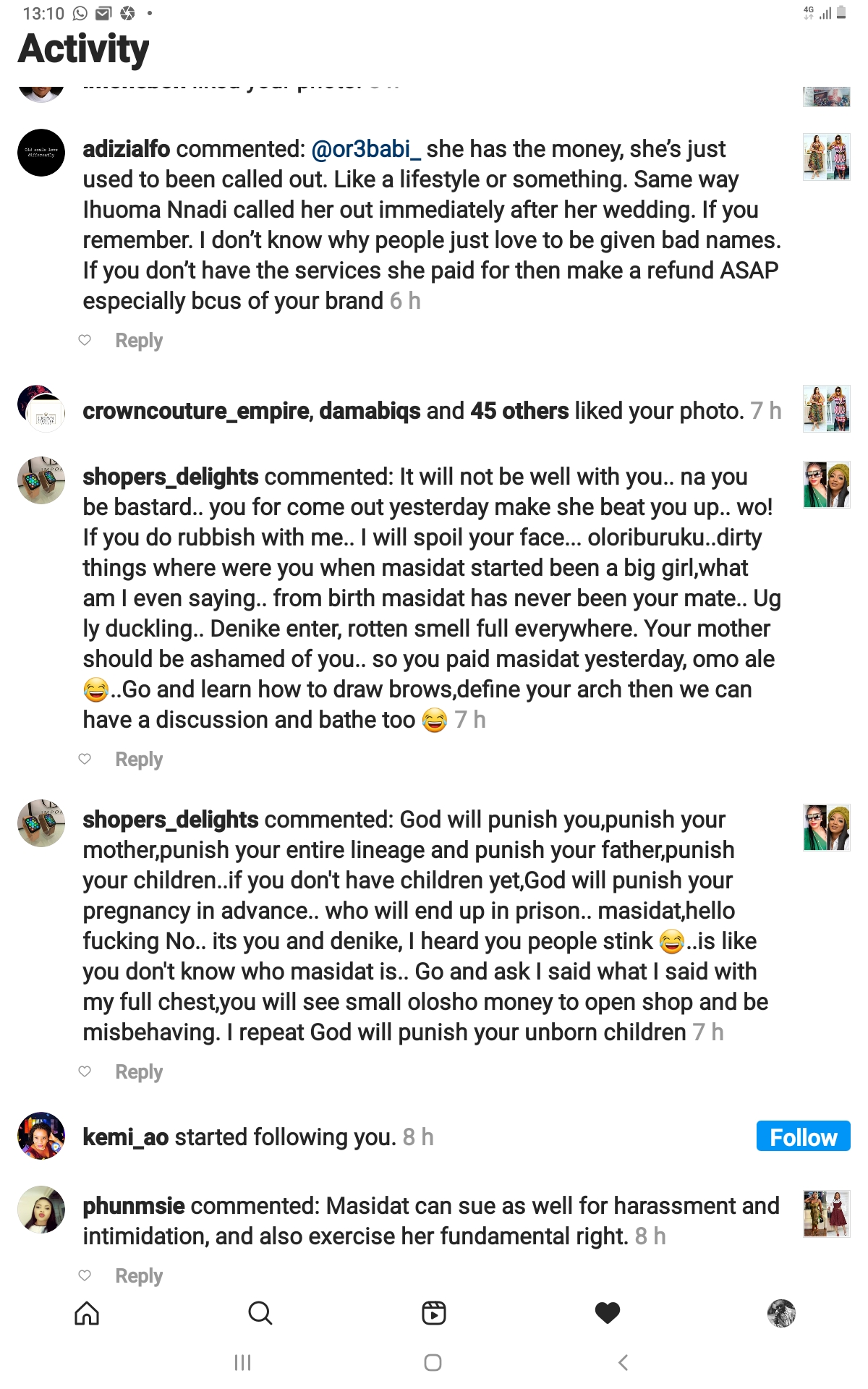 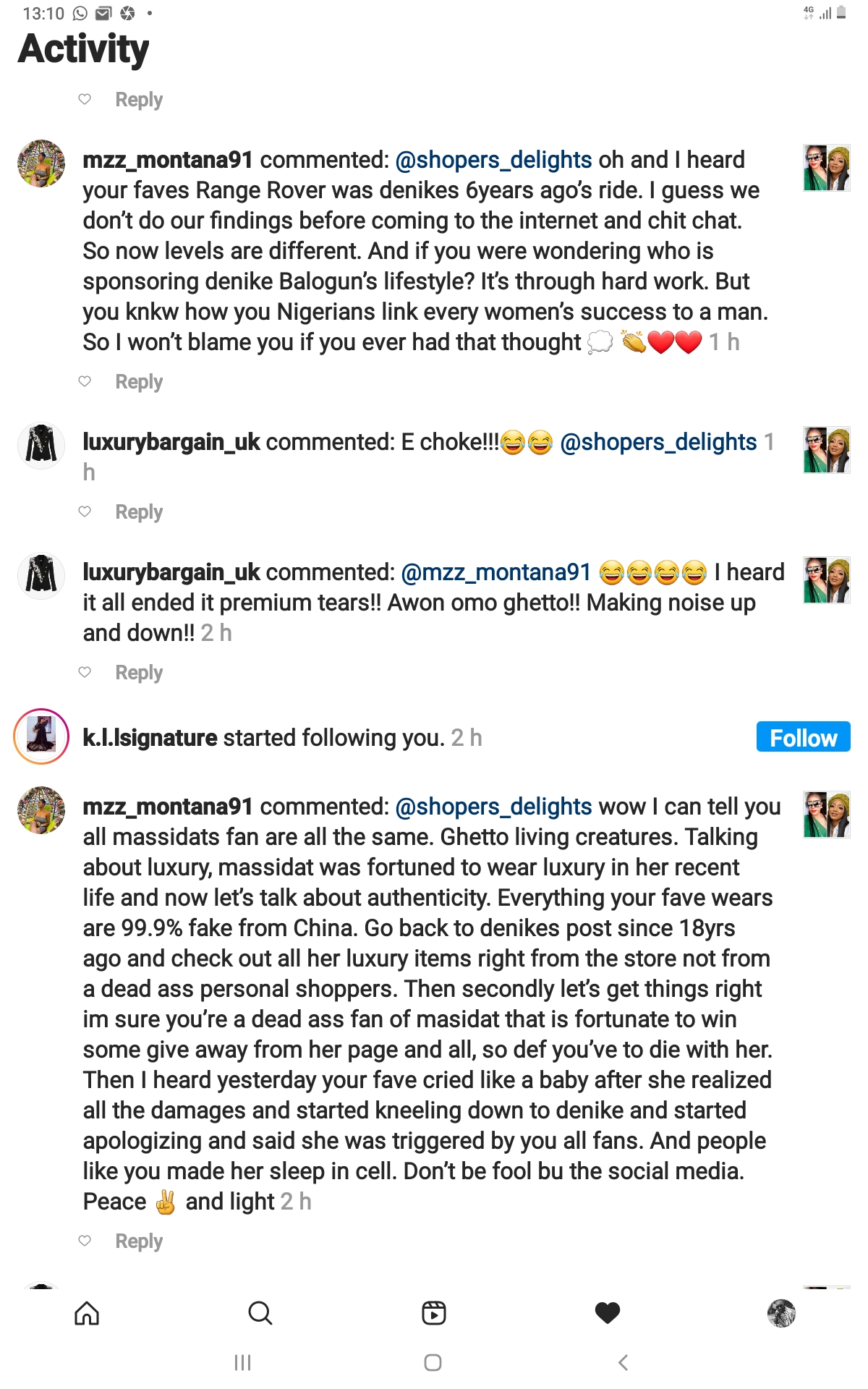 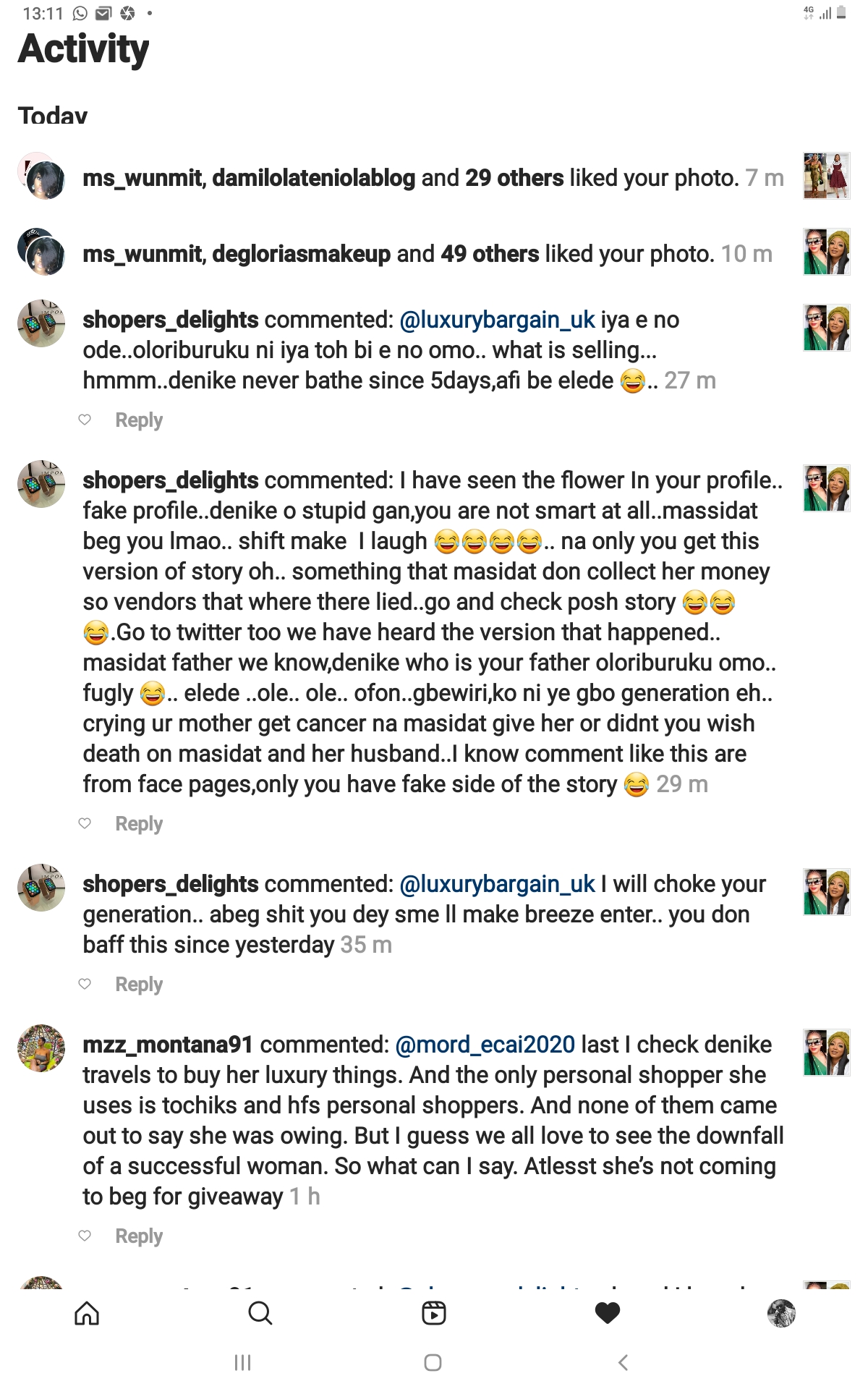 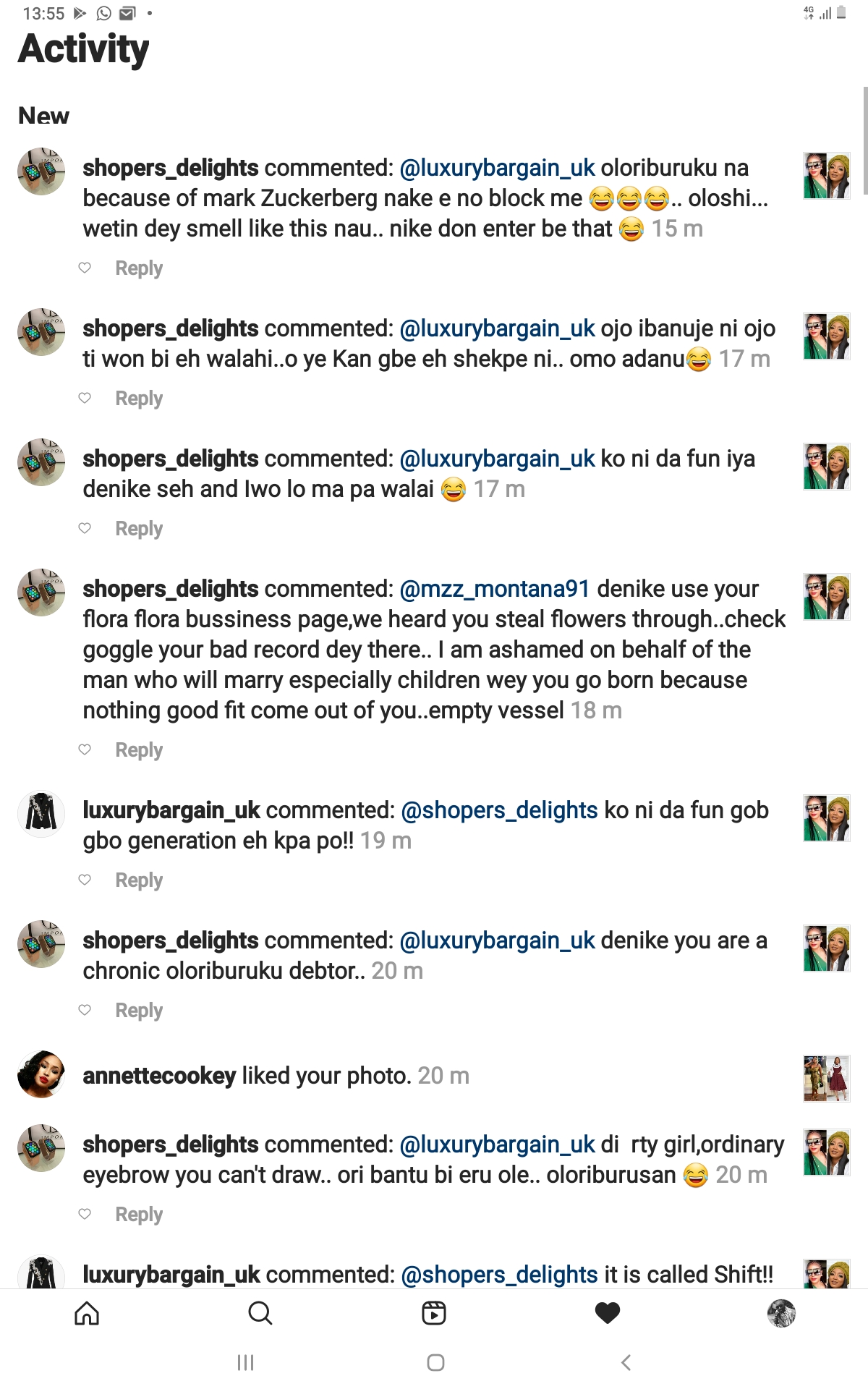 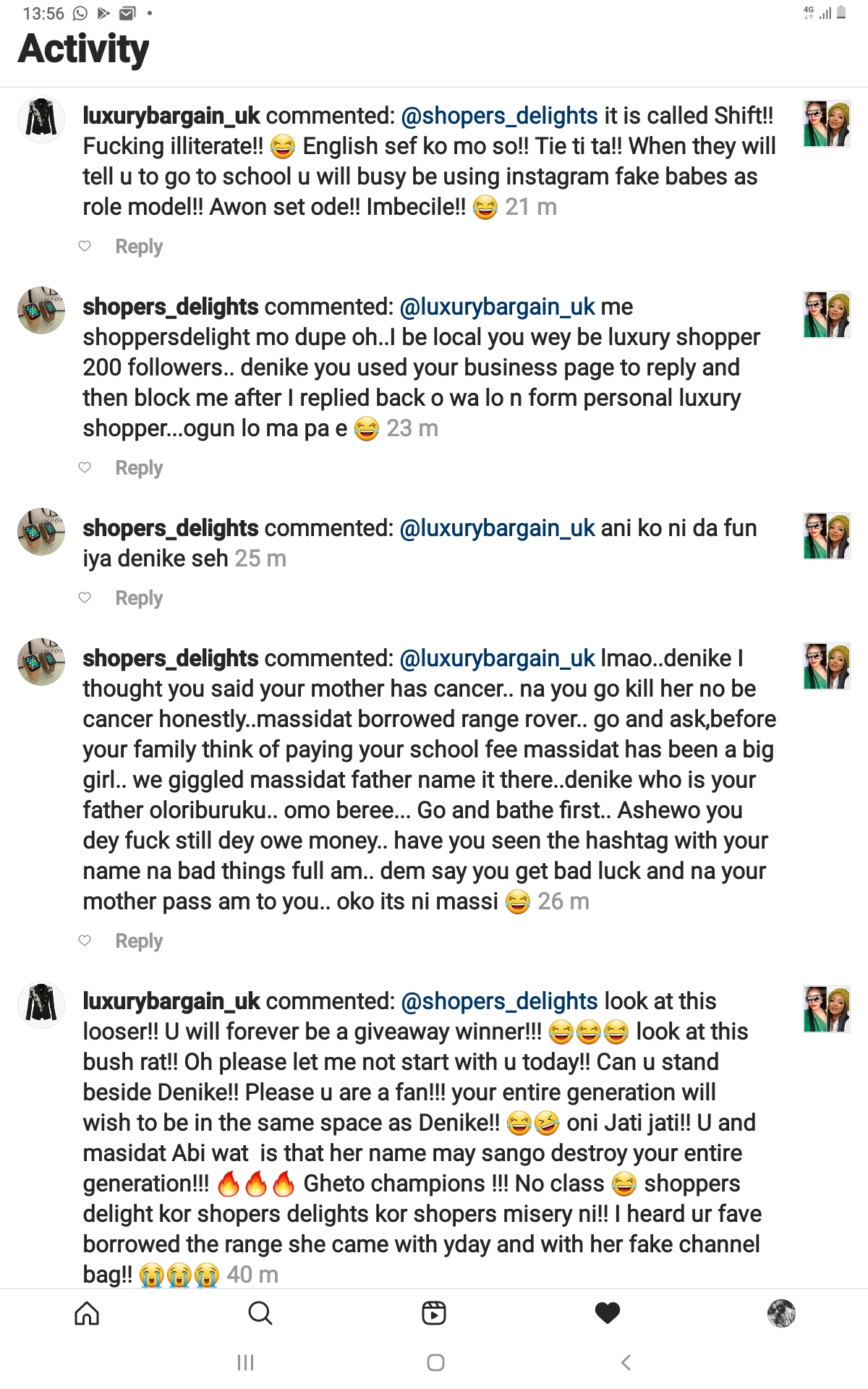 So okay it took about 4 to 5 days, at least since Mother’s day before sanity was atleast allowed or better still welcomed to reign over this very precious [N120,000] that had exchanged hands between Masidat Kassim, the daughter, in fact the last born daughter of Ijebu-Igbo old money known to the world as Shokays Lace and Denike Margaret Balogun, the Lagos big girl fashionista extraordinaire, who is an unrepentant lifestyle brand entrepreneur and the brain behind such enterprises like Diamond Ink Luxury Events, The Tearoom Lagos, Cafe de Flore, Mykonos and Maggie’s Fleur Box.

So we all know what transpired between the 2 ladies and how things were not handled right, most especially on the side of Denike. If you have a company policy that helps to determine repayment or resolution of money exchange, such a policy should always be well advertised on any flyer for any event organised by you and should be under what is tagged- terms and conditions. This is what helps to make contracts work as it helps to spell out to a certain extent terms of engagement between 2 parties and how to resolve issues, should any crop up. To not have such in place and to now want to grandstand is a menu for anarchy.

So we were all shocked onlookers as this particular drama played out and the mudslinging was epic to say the least. Many wouldn’t forget in a hurry so many of the things spewed out. But thank God that the police eventually came into the matter and everything has now been resolved, money has been paid so now everyone should move on.

As we speak Masidat is already free from the police custody and is already going about her private business like nothing ever happened at all before, she hadxalwats said it that her action is based on principle,  so she did what she did to get her money and get paid her due respect. We believe that Denike too is already going about her own business too and we hope that she would sit down to examine the matter of the last few days holistically and do all the proper adjustments that’s needed, so there wouldn’t be a repeat or a reoccurrence or a replay of such crazy drama again in the future.

But while the 2 assailants have decided to bury the hatchet, sheathe their swords and forget the matter and move on, embracing the no victor no vanquished motto, friends, fans, associates on both sides are not willing to concede defeat or let go of the matter yet. They are still throwing bricks and mortar at each other, all just so that they would claim to have the last laugh!

On our Instagram page @maestrosmedia in the comment section the battle is still been fought heavily. Apparently Denike’s team of lovers are claiming that Masidat while at Alagbon went on her knees to beg for forgiveness, which we know to be preposterous. While Masidat’s team of lovers are pooh-poohing such as a gross lie from the pits of hell and saying so much else. We saw somewhere where someone even referred to someone as pussy-preneur, crazy to say the least. One of the respondents is even of the opinion that it is Denike herself that’s hiding under the guise to say most of the things. Then another claims that Denike pongs.

And what is the major issue or their bone of contention? Just imagine that, It is that one is the more sophisticated one and with sophisticated friends, and the other is the razz one, alongside her friends; that one has been wearing designers labels since forever from when she was born, that even the birth was designer enabled, while the other only just began the life recently; That one wears fakes or mixtures of fakes from China and only a few originals, while the other one is the queen of authentic. And this is not all, the abuses are from the pits of hell too.

MASIDAT KASSIM OFFERS PUBLIC APOLOGY TO DENIKE BALOGUN & RETRACTS ALL INVECTIVES THROWN HER WAY. ALSO WHO IS @SESSY004 OR SESIAJOSE & WHY THIS NEW WAR OVER N16,500?
GLAMOUR OVERLOAD AT THE PREMIERE OF #LAFEMMEANJOLA WHICH STARS THE INCREDIBLE THESPIANS RITA DOMINIC & EGO BOYO.
Comment