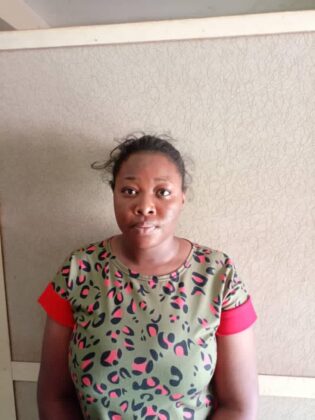 A dastardly crew of evil doers made up of a female 300 levels University undergraduate, her aiding and abetting boyfriend and another on the run, whose speciality is to produced home made drug laced cookies, which they in turn now sell to both knowing and unsuspecting buyers, including young students (kids) have been nabbed by the Abuja division of the National Drugs Law Enforcement Agency the NDLEA for short.

The cookies/biscuits are specially produced with a potpourri of drugs that includes Arizona, a very dangerous version of cannabis (Indian hemp/weed/marijuana), soaked in alcohol and rohypnol (fluitrazepam) an hypnotic, that is used to treat severe insomnia & assist in anesthesia amongst other ingredients they also use in making the addictive killer cookies.

Rohypnol also known as Mexican valium, la rocha, forget-me-pill, is a renowned tranquilizer, used by doctors as anesthesia before surgery and it is a drug that must be used under very strict medical instructions and only for a short term only. It is also known as the “date rape drug”. The deadly Rohypnol a depressant when mixed with marijuana, heightens the effect of the weed to an astronomical level. On its own alone it can impair the user for between (8 to 12 hours) and induces aggression and excitability in the person. So just imagine the evil combo that this people have disguised so innocently- Arizona, Alcohol, Rohypnol and some other things!

While the boyfriend and girlfriend duo have been caught and are already singing like unstoppable canaries, their accomplice is already on the run trying to escape arrest, but a manhunt is already on his tail and tail to catch him.

Their dastardly actions were blown open when one of them Rhoda Agboje, the 300 level undergraduate was caught red-handed, with the suspicious cookies (4) in her hands on Sunday, April 18, 2021. She was arrested at the NNPC Cooperative Estate across Gaduwa Estate in Abuja, based on a complaint that she had given her drug laced cookies to an unsuspecting young girl, who upon eating the dangerous cookies, went totally bonkers, not only that she couldn’t sleep, but now nearly went berserk due to the effects of the drugs in the cookies, making incoherent sounds that scared her wards.

Upon interrogation after she was nabbed, Rhoda confessed to be the (chief baker) of the drugged snacks with another collaborator and that they sell a pack of 3 for just N1500. A follow up sting operation to her partner and boyfriend’s apartment, yielded further evidences as 200 more of the dastardly products were also recovered too! From the look of it, this crew must have a kingpin they haven’t mentioned yet.

According to the state commander of the NDLEA FCT Abuja, Mohammed Malami Sokoto, Ifeanyi Nwankwo, the boyfriend and all the equipments used in the production of their evil products were brought to the NDLEA office for further investigation. Rhoda further confessed that she sold their products at parties to unsuspecting members of the public, which includes school children, who were the most vulnerable. She went further to state that she also supplies some supermarkets and night clubs in Abuja too. Meaning that sadly, innocent and unsuspecting cookie lovers have been deliberately exposed to undue and life threatening addiction without their knowledge.

The overall boss of the NDLEA, former Governor of Lagos State and Nigerian High Commissioner to South Africa, retired Brigadier General Buba Marwa, while commending his men for a great job well done for smashing the evil crew, in the sane vein also admonished parents on the need for vigilance as concerning their wards saying thus-

“I wish to draw the attention of parents to this new devious strategy to get children addicted to drug cookies and to urge them to remain vigilant while monitoring what their wards bring home from schools or consume as snack”.