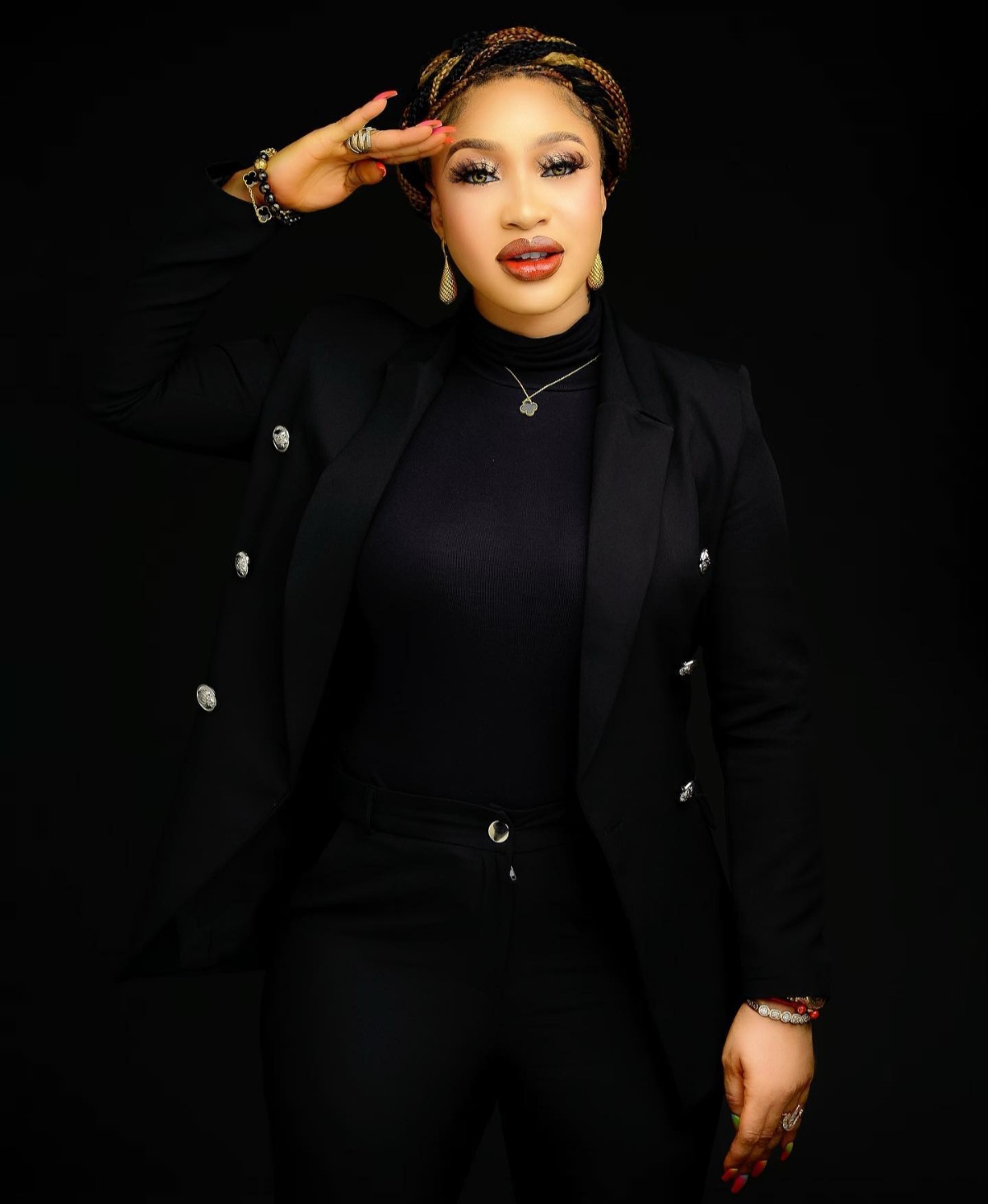 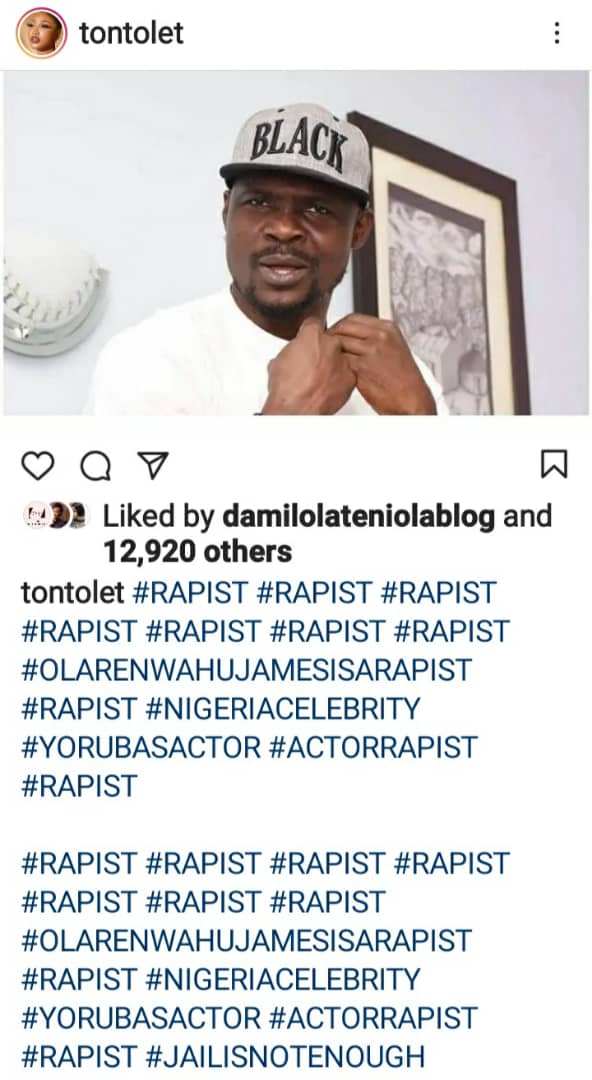 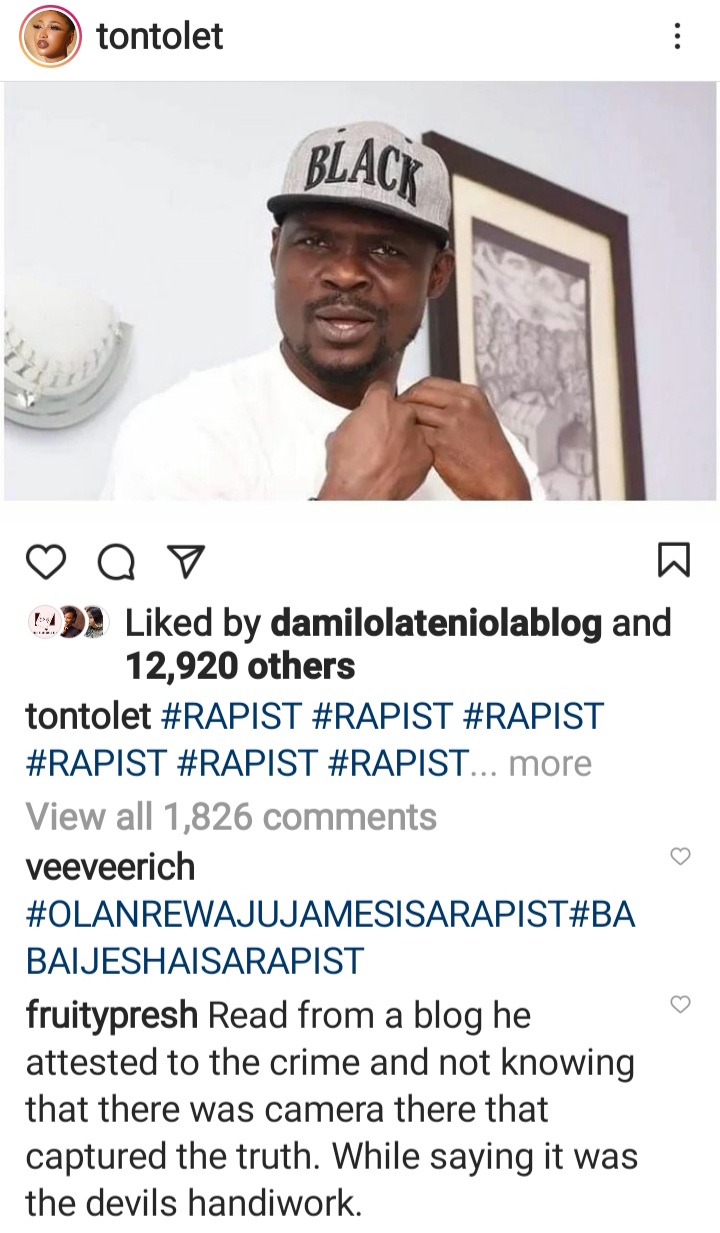 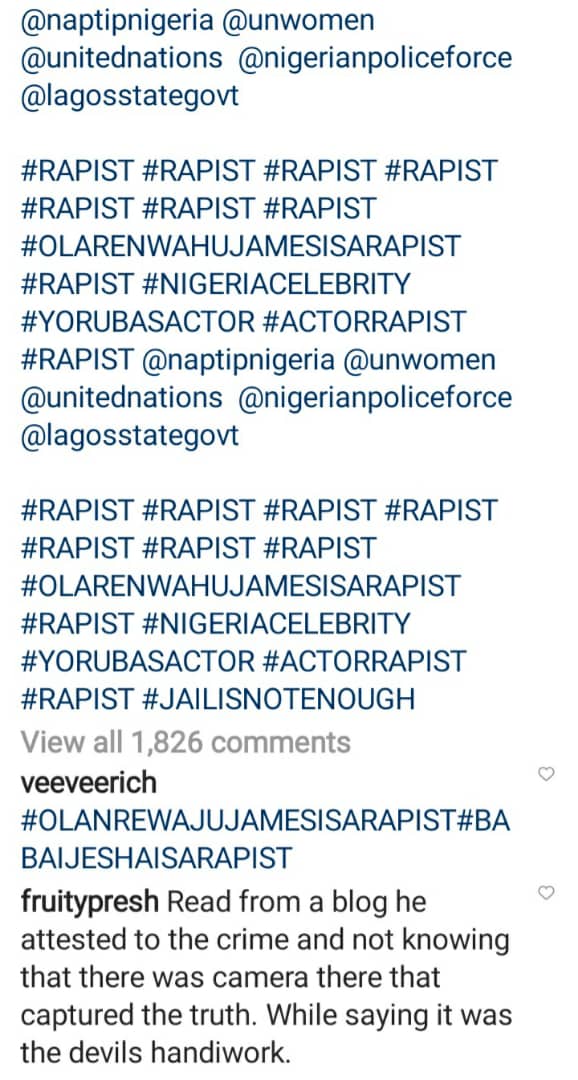 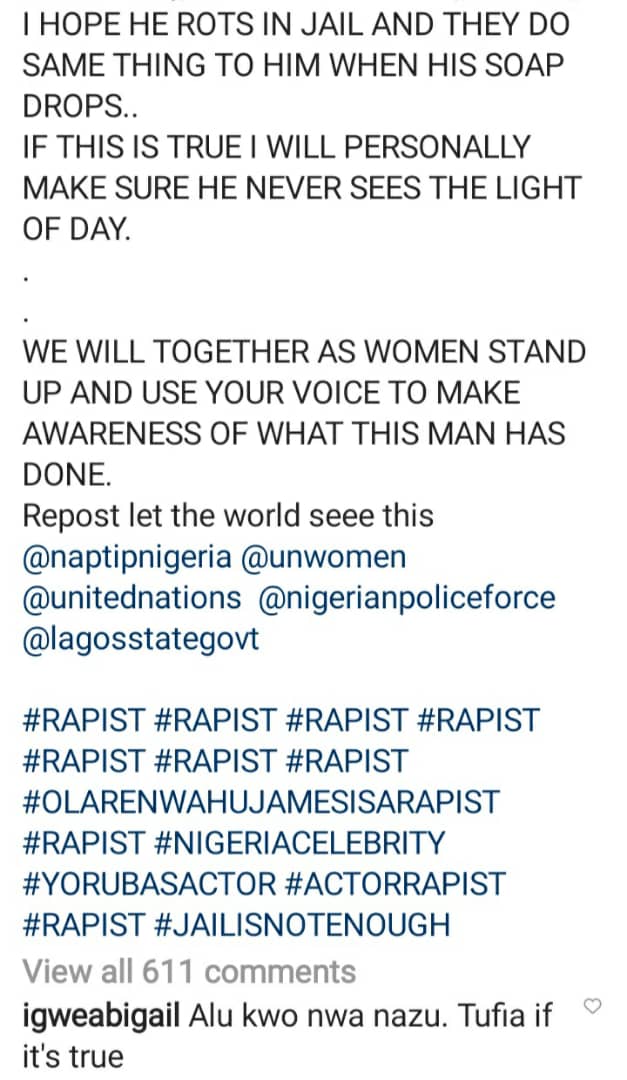 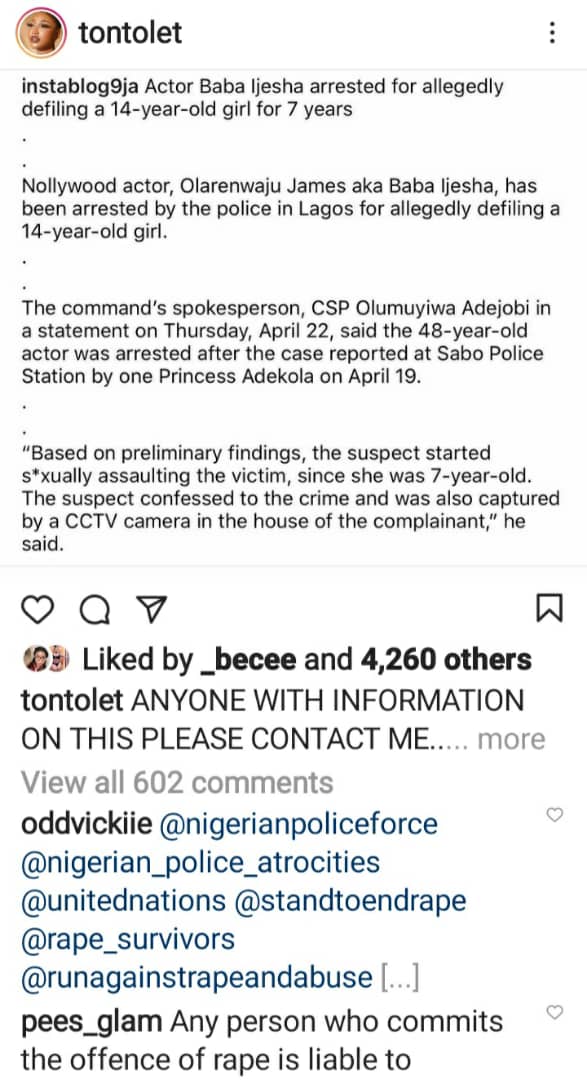 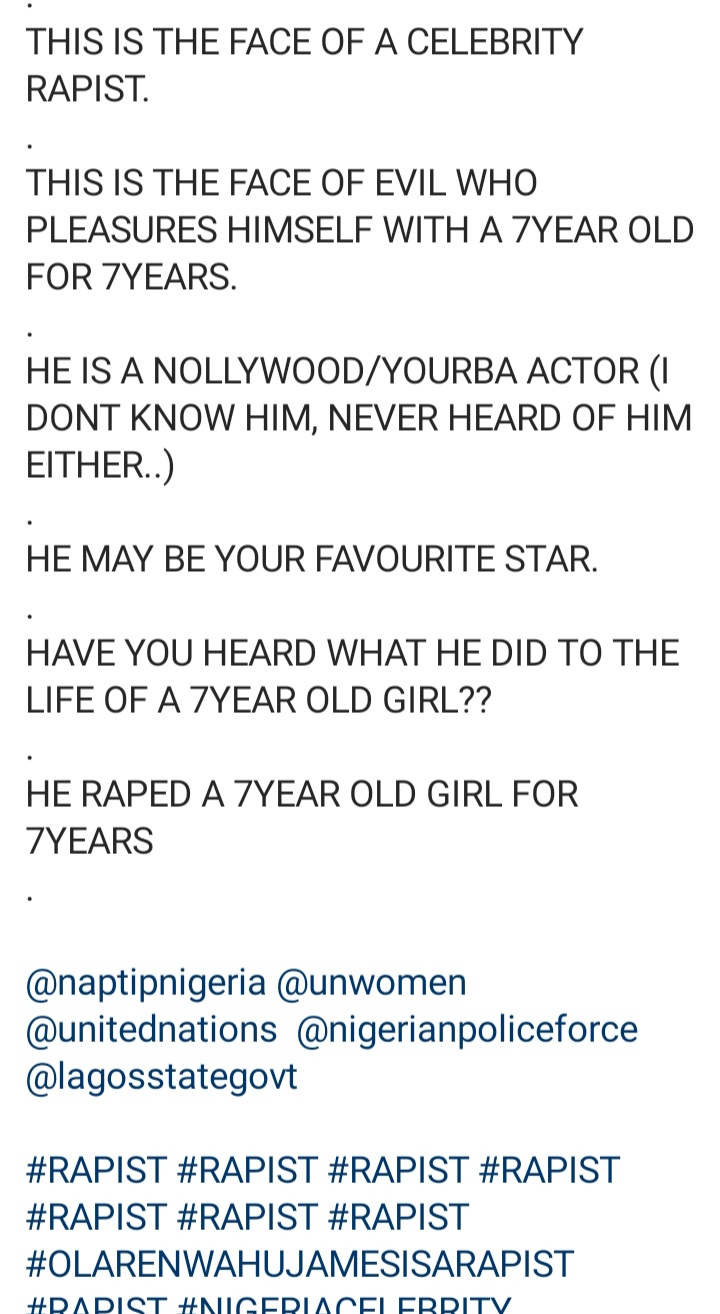 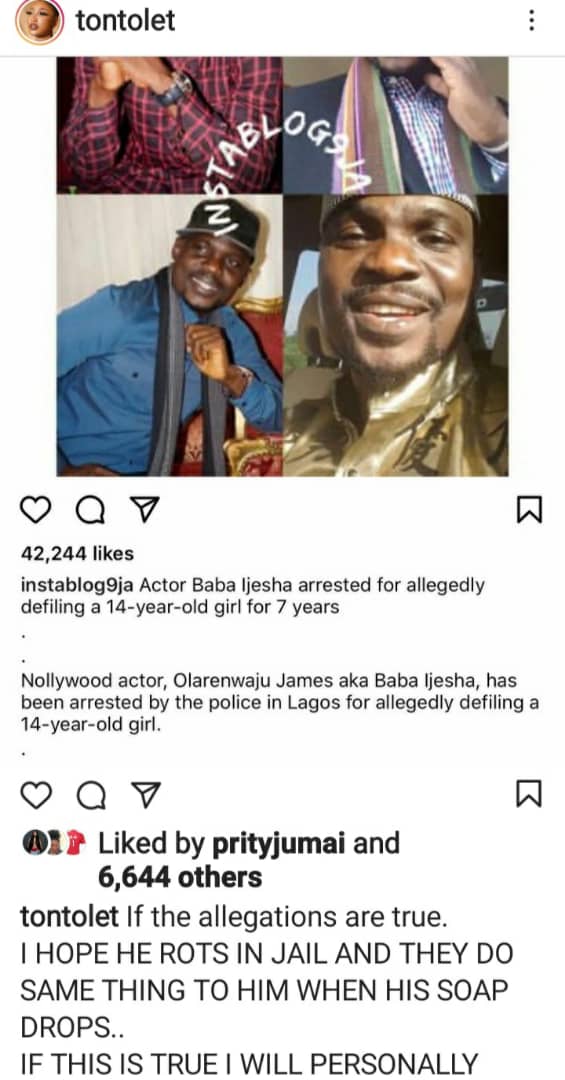 In the last few years, outspoken actress Tonto Dikeh, ex-wife of Churchill Olakunle as done her best to package herself not just as a celebrity of note, but also as an advocate of some sort too, especially one with a very loud voice, one who doesn’t flinch at all whenever it comes to lending her voice to whatsoever she believes in.

So in the aftermath of the arrest of Yoruba Nolly act Baba Ijesha on the allegation of defilement of a minor, the mother of 1 has gone has not minced her words as she wants the alleged defiler to get as maximum a penalty as possible, if he is proven to have committed the allegations against him.

According to the news, Olanrewaju James Omiyinka aka Baba Ijesha had repeatedly had carnal knowledge of a minor since the age of 7 year old till she was 14 year old when he was allegedly nabbed red-handed in the act some days back, via the aid of a CCTV security camera. According to preliminary reports, the actor was said to have confessed to the crime, which apparently left the mother of the victim in absolute shock.

It has been a week of disbelief though, as colleagues of Baba Ijesha and the public have both condemned the act, while some too have asked for restraint, so that the actor would be given the benefit of the doubt and not be judged by public opinion until he is convicted or released by a court of competent jurisdiction. Like someone has said matter of factly, that’s quoting a former lawmaker who was also a former thespian himself too by the name Hon. Rotimi Makinde, “Baba Ijesha should be adjudged innocent until he is convicted after he must have been proven guilty”. And he is unapologetic about his utterance or assertion.

But the popular and award winning actress, entrepreneur and award winning philanthropist/humanitarian- Tonto Dikeh wouldn’t have that and has instead not hidden her disgust while calling for the tightening of the hangman’s noose on the neck of the supposed assailant, Baba Ijesha. She made her thought about the matter pretty clear on her Instagram not minding whose ox is gored thus-

“If the allegations are true, I hope he rots in jail and they do the same thing to him when his soap drops. If it is true, I will personally make sure he never sees the light of day.”

She then went further to ask women to come together to fight the actor so he would remain in jail. Stating thus-

“We will come together as women, stand up and use our voices to make awareness of what this man has done. Anyone with information on this, please contact me.

“This evil man must not be released nor granted bail. They may tweak the law to his favour as a celebrity, what we should all do is repost this and tag foreign and local authorities.

According to the Lagos State laws on defilement in section 218 of the criminal code act, the penalty for actual defilement is life imprisonment. An attempt to commit same crime meanwhile attracts 14 years only. However there is a proviso in the law, a prosecution in such a case must be carried out within 2 months of such an act been committed or else the accused cannot be prosecuted no more.

LATE DR. JOSEPH ADEMOLA OLUWATOSIN AJAYI: SEE HOW TIME FLIES! IT’S ALREADY A YEAR NOW SINCE HIS UNFORTUNATE DEMISE. MAY HE RIP. Was he 68 or 75?
A SAD DAY FOR NOLLYWOOD AS OLANREWAJU JAMES OMIYINKA AKA BABA IJESHA WAS SUPPOSEDLY NABBED IN THE ACT OF THE DEFILEMENT OF A MINOR! AND THE DUDE RISKS LIFE IMPRISONMENT IF CONVICTED!
Comment