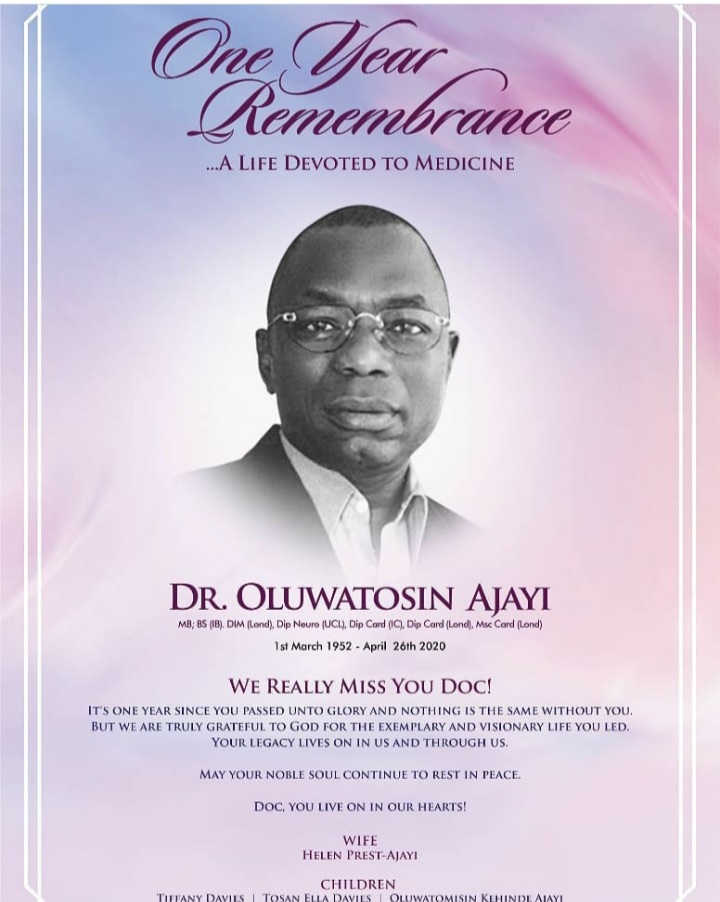 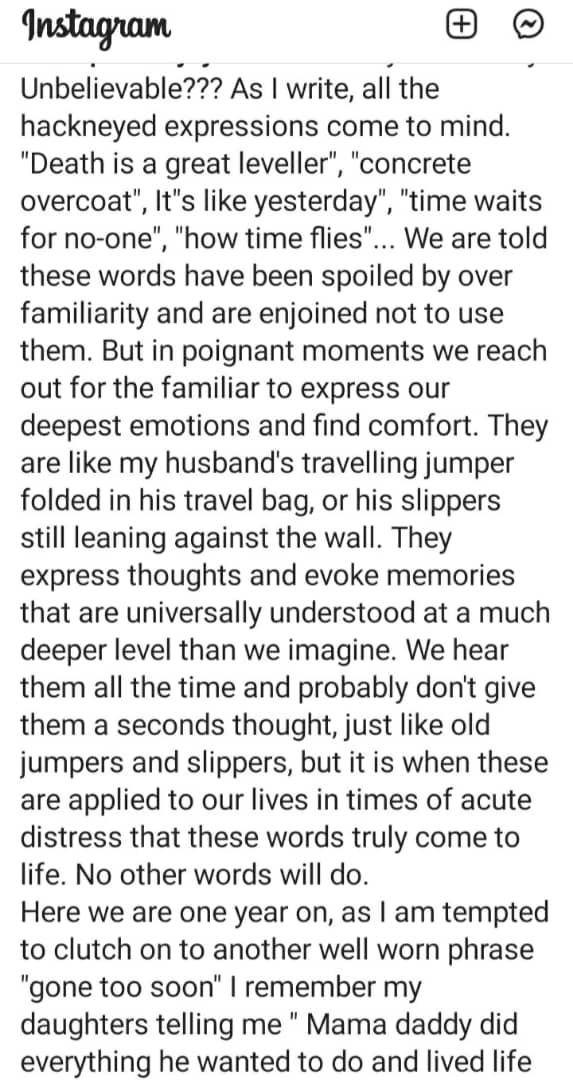 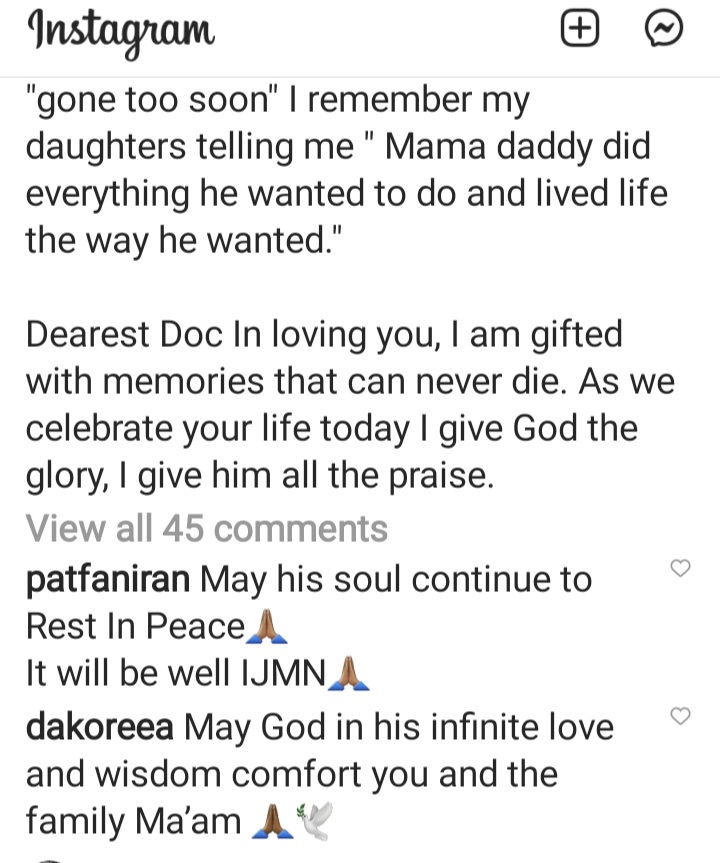 Sunday, April 26, 2020 was when he actually gave up the ghost after a long battle with a supposed kidney ailment, before he finally succumbed to death at the Lagos Island based premier hospital, St. Nicholas Hospital Lagos at the age of 75 (there seem to be a controversy about his actual age either 68 or 75). He had battled the issue Iike a gallant soldier should, but he just couldn’t win the battle. And that unfortunate passage, immediately raised many issues and opened a can of worms, like a Pandora’s box!

It was like those who had been waiting patiently in the wings for such a time like it, found their long awaited opportunity to bare their deadly fangs and poisoned claws and they immediately pounced with vengeance. Accusing the lady he had spent the last 25 years of his life with as having a hand in his unfortunate demise! The world was aghast! And the trouble began in earnest.

The unprecedented hoopla raised was totally unbelievable and uncalled for. If the dead had any ways via which he could look back and see what his death had unleashed and he could reprimand his people, he would have done so immediately and with extreme gusto too. The dead himself would have been so shocked at what came out and may have thought that had he known, maybe he would or could have done things far better and left a far better legacy behind than he left.

If truth be told though, he surely didn’t handle the latter part of his life well and should have handled things far much better as he didn’t leave a rancour free heritage.

There were things as an older man and a quite intelligent one at that that he should have anticipated would happen and that he could have nipped in the bud. But maybe he had thought he would live forever or that he may have felt that the living should handle their own issues when it arises, while the dead should go rest. But alas, that his supposed rest eluded him for quite a while, as he wasn’t allowed to have it, as the 2 sides of his adorable family, left nothing sacred as they dealt with each other with unprecedented gusto, ready to draw blood and wipe each other out as they washed their dirty linens in public, to the shock and enjoyment of the watching audience, who for want of drama and comedy, didn’t mind what was happening at all.

On the opposing side is the first wife, the doctor’s first love whom he had legally married very many years before and whom he was estranged from as at the time of his demise, but who he never divorced (they were only separated and supposedly still in contact one way or the other), so by all intent and purpose, she has the first right to his possessions etc. Madam Oluyemisi Ajayi, a now retired Chief Nursing Officer with the Lagos State Government and the mother of his 5 eldest kids was on one side. While on the other side, was his (supposed 2nd wife)- Helen Ajayi, a former beauty queen and lawyer by training, whom he met 10 years after leaving his marital home of his own accord and with whom he was with till he died, who was the mother of his last child, a brilliant and beautiful daughter, a graduate.

Both sides dug deep into the grounds and built trenches too and weren’t ready to give an inch not to talk of a yard for each other.

The 1st side accused the other side of sundry issues, first that the other side killed their dad, secondly they premised their battle on the fact that Helen Ajayi was never legally married to their father and was only just a companion and thirdly that she was up to no good, as she had visited their father’s office immediately after his death and made away with certain documents. So they petitioned the police to investigate all their allegations, to wit the police didn’t find anything untowards.

Helen Ajayi on her own, was not ready for anyone from anywhere, no matter how connected they may have thought they were, to belittle and make nonsense her 25 years of love with her man. So she fought them fire for fire, gave as good as she got, not minding whose ox was gored. To her they had brought the battle to her, so in defending herself and her sanity, all was fair in war. Much as the other side tried though, they couldn’t win.

While all this unpalatable back and forth went on, during which they were throwing the kitchen sink and toilet and more at each other, all the while the body of their beloved dead was left to wallow in self pity in ice at the morgue, all of 10 straight months! For that 10 months they didn’t give a hoot at all and it took the court to try to bring peace between the warring parties. So that after that 10 months in the cooler, just chilling away, hoping for respite that his body was finally buried and may have finally gotten the peace he had desperately wanted.

But even at that, daggers were literally drawn again at the burial site to the shock of onlookers! Both supporters on each side edging their own sides on and saying they should not give an inch, at the cemetery. But finally, the man was buried and he reluctantly went away to go rest or so it seem.

So today, Monday, April 26 2021 is the first anniversary of his death. We again anticipate that there would be a mad competition, a race to outdo each other in his memorial. He has only had 2 months or thereabout only to rest, maybe the family members would allow decorum to reign this time around, though we doubt.

The late Dr. Ajayi was a filthy rich entrepreneur, investor, cardiologist, medical technologist and philanthropist. He was the founder/owner of First Foundation Medical Center, which became renowned in 1986 as it was where the late publisher of Newswatch, the incredible Dele Giwa was rushed to after the parcel bomb that snuffed his life then blew on his lap. Dr. Tosin owned many valuable landed properties here and there and had many great investments too in his lifetime, that we are too sure could go around if the family can just all collaborate and let peace reign.

TROUBLE IN THE SUPPOSED PARADISE. THINGS ARE DEFINITELY NOT LIKE THEY ACTUALLY SEEM. AS THE MADAMS BATTLES FOR RELEVANCE, WHO WOULD CALM FRAYED NERVES.
TONTO DIKEH WANTS BABA IJESHA TO ROT IN JAIL! IF CONVICTED OF RAPE.
Comment